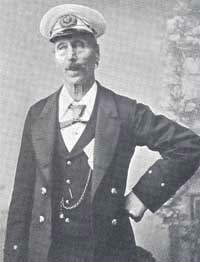 Born in 1835 in Dalston, England, James Henry's Pullen's severe deficits were apparent from an early age.    First believed to be deaf and mute , James only learned to speak his first word at the age of seven (he learned to call his mother "muvver").

Both he and his brother William were intellectually disabled, although the precise cause remains unclear (their parents were first cousins but this seems unlikely to have been a factor).   The actual diagnosis for the two brothers is still debatable, but the available descriptions of James Pullen's early childhood suggests severe autism (and possibly severe aphasia as well).

His language skills showed little improvement over the years and his poor social skills made it impossible for him to remain at home with his parents in their South London home.   At the age of thirteen, James was sent to a facility for the developmentally disabled in Colchester and, two years later, to Earlswood Asylum in Redhill, Surrey.

First opened in 1855, the Royal Earlswood Hospital (also known as the Royal Earlswood Asylum for Idiots) was built through private subscription and the sponsorship of Queen Victoria herself.   Both Victoria and Prince Albert took a special interest in the hospital and it received a royal charter in 1862.  Under the supervision of John Langdon Down (who was the first medical superintendent of the hospital), the Earlswood Asylum was intended to provide "idiots" (a recognized medical term at the time) with the proper care they could not receive in the community.   Although tuberculosis remained a prime cause of death at the hospital, the medical and educational care that patients received made it a model for similar institutions established around the world.

For James Pullen (as well as his brother William who arrived later), the asylum was a sanctuary where he could learn the woodworking that would make him so well known later in life.   Unable to speak except for a few monosyllabic words, he mainly communicated through gestures.  Despite his limitations, James was fascinated by wooden toys and enjoyed watching other boys sailing wooden ships.  From an early age, he began carving his own ships out of pieces of firewood.  While at Earlswood, James became a woodworking apprentice and learned to make furniture.    He quickly settled into a routine which involved making furniture during the day while sketching marvellous drawings at night using coloured chalk.    After completing his drawings, James carefully glazed them and constructed beautiful frames so that the drawings could be displayed.  Many of these drawings went on display throughout the asylum and one of them was sent as a gift to Queen Victoria (who sent James a gift in return).   On one of his visits to the asylum, Prince Albert was shown the drawings and was presented with an elaborate drawing of the Siege of Sebastopol which James had made based on newspaper accounts of the battle (the Crimean War was still being fought at the time).

Not only did James Pullen become a minor celebrity for his drawings, he also constructed elaborate wooden models of some of the ships that he saw on one of his rare excursions to a nearby naval station.  Given the demand for James' artwork,  he was allowed two workshops and all the freedom that he needed to pursue his art.  One of his most ambitious projects was an elaborate scale model of an iron sailing steamship, The Great Eastern.  Taking seven years to complete, James' model was ten feet long and contained more than 5,000 rivets.  Along with thirteen lifeboats, the model also reproduced the state cabins of the original steamship, right down to the chairs, bunks and decorations.  The model allowed the main deck to be raised so that it could display the exquisite detail underneath.  Placed on display at the Fisheries Exhibition in 1883, it won the first prize medal.

Despite James' fame, the Asylum staff had their share of problems with him.  He never learned to read or write and he often had moody episodes in which he became violent (including smashing up his workshop at times).  Staff had difficulty controlling him and, in one memorable incident involving a staff member that he disliked, James constructed a working guillotine and placed it over a door to decapitate the staff member in question (only a fluke prevented anyone from being injured).   He was also suspicious of strangers and constructed a large mannequin in the centre of his workshop which he could sit in while directing its movements.   Despite his hearing problems, James was extremely sensitive to his immediate surroundings and devised an alarm system based on floor vibrations to alert him to any approaching visitor (he also enjoyed playing the drum in the Earlswood asylum band).

As one later physician would describe him, "His powers of observation, comparison, attention, memory, will, and pertinacity are extraordinary; and yet, he is obviously too childish, and at the same time too emotional, unstable, and lacking in balance to make any headway, or even to hold his own in the outside world".

By 1887, when Langdon Down first presented his seminal paper on "idiot savants" (James was one of his seven case studies), James Pullen had been in the asylum for thirty-seven years and had become its star patient.   His brother, William, had died in Earlswood at the age of thirty-five and James had no real contact with the outside world except for his many visitors.   His social skills remained limited although he was able to go out with friends to local taverns (and often returned to the asylum drunk).    The drinking binges would continue for many years but he was eventually persuaded to become a teetotaller in the last few years of his life.

When James Pullen died in 1915, the scientific interest in his case continued.  His brain was preserved in a formalin solution and sent to Maudsley Hospital where it was examined by Dr. Friedrich Sano.  In the extended autopsy which Sano prepared, he reported that James Pullen's brain weighed 1,190 grams at death (1,500 grams is average).  Sano also highlighted the different pathological features which he found in the brain which he felt might provide a clue as to James' astonishing talents.  Unfortunately, there was also evidence of significant senile deterioration which limited Sano's findings.  In particular, Sano pointed out that James had an extremely well-developed occipital lobe and a slightly larger than normal corpus callosum which he concluded "may have been of no little importance as regards the visual capacity and the artistic skill that gave Pullen, with his perseverant and tenacious character, the means of attaining a personal originality and distinction".   Despite his observations, Sano concluded that there was insufficient evidence of neurological differences that could explain James' prodigious talent.

The biological basis for the savant syndrome remained a mystery (and still does today).   Despite lingering questions over the precise diagnosis that can be made in his case, James Pullen's life represents a gripping example of how patients who were often relegated to asylums could still affect the world.

Numerous examples of James Pullen's artwork were kept on display at the Royal Earlswood Hospital where his workshop became a formal museum dedicated to his life.  Although the hospital was formally closed in 1997, many of the hospital buildings have been preserved as heritage sites.   Visitors can still see examples of the artwork at the Museum below.