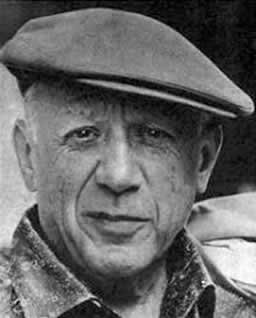 Pablo Ruiz y Picasso, known as Pablo Picasso (1881 – 1973) was a Spanish painter, sculptor, printmaker, ceramicist, and stage designer who spent most of his adult life in France.

He pioneered a range of innovations in art – cubism, constructed sculpture, and collage.

A nanoprobe of Picasso's The Red Armchair (1931) by physicists at Argonne National Laboratory in 2012, for example,  confirmed art historians' belief that Picasso used common house paint in many of his paintings.

Picasso started  painting in a realistic manner through his childhood and adolescence. Only later did he change style.

Interestingly he was never a 'poor artist'. His paintings  brought him universal renown and an immense fortune.  In later life he was rich enough to own a vast Gothic home, and a number of large villas in the south of France, such as Mas Notre-Dame-de-Vie on the outskirts of Mougins, and in the Provence-Alpes-Côte d'Azur. He also became  an international celebrity, with often as much interest in his personal life as his art.

He received formal artistic training from his father, an art teacher, in figure drawing and oil painting. Ruiz was a traditional, academic artist and instructor, middle class, but unrecognised artistically.   At age 16, Picasso was sent to Madrid's Royal Academy for tuition, but he disliked formal instruction and stopped attending classes soon after enrollment.

Picasso made his first trip to Paris in 1900, then the art capital of Europe. There, he met his first Parisian friend, the journalist and poet Max Jacob, who helped Picasso learn the language. Soon they shared an apartment. These were times of severe poverty, cold, and desperation. This was, however, the only time in his life that he knew real hardship.  From this point on he managed his own career with great skill.  There is just the hint that Picasso's taste of what poverty could be like, made sure he worked very astutely to make sure it never happened again.

In 1905,  Picasso became a favorite of the American art collectors Leo and Gertrude Stein. Their older brother Michael Stein and his wife Sarah also became collectors of his work. Gertrude Stein became Picasso's principal patron, acquiring his drawings and paintings and exhibiting them in her informal Salon at her home in Paris.  The Steins also introduced him to Claribel Cone and her sister Etta who were American art collectors; they also began to acquire Picasso's paintings.  In 1907 Picasso joined an art gallery that had recently been opened in Paris by Daniel-Henry Kahnweiler. Kahnweiler was a German art collector who became one of the premier French art dealers of the 20th century.

In the summer of 1918, Picasso married Olga Khokhlova.  Khokhlova introduced Picasso to high society and the rich in 1920s Paris.  The two lived in a state of constant conflict.  They spent their honeymoon in the villa of  Chilean art patron Eugenia Errázuriz.  Picasso’s marriage to Khokhlova soon ended in separation rather than divorce, as French law required an even division of property in the case of divorce, and Picasso did not want Khokhlova to have half his wealth.

Picasso's paintings are certainly different, but I am not sure one can really call them inspired.  He was very clever at changing styles to continue interest.  In marketing, we all know that you need to reinvent and repackage products to get customers to buy them and he did this with great flair.   Picasso’s work is often categorized into periods.  Blue Period,  Rose Period , the African-influenced Period, Analytic Cubism, Synthetic Cubism.  Clearly if you want to sell to wealthy patrons, you need a name to classify paintings for people who want to be able to say to their friends 'this was from his blue period'.  It helps when the colours used are mostly blue – it is easier for them to remember.

Let us be kind and say his paintings aren't just astutely manufactured works aimed at naive wealthy patrons.  Where did this inspiration come from?

One might be tempted to think that Picasso's principal inspiration was sex.  Not love, sex.  He was a sort of Spanish Lord Byron, but more so.

He had numerous mistresses including some of his patrons – an astute move. In 1904,  he met Fernande Olivier, a bohemian artist who became his mistress. After acquiring some fame and fortune, Picasso dumped Olivier for Marcelle Humbert.  In 1927, Picasso met 17-year-old Marie-Thérèse Walter and began a secret affair with her whilst married to Olga.  Picasso carried on a long-standing affair with Marie-Thérèse Walter and fathered a daughter with her, named Maya. Marie-Thérèse lived in the vain hope that Picasso would one day marry her, and hanged herself four years after Picasso’s death.

In 1944, after the liberation of Paris, Picasso, then 63 years old, began a relationship with a young art student named Françoise Gilot. She was 40 years younger than he was. Picasso grew tired of his then mistress Dora Maar and dumped her; Picasso and Gilot began to live together. Eventually they had two children. In her 1964 book Life with Picasso, Gilot describes his abusive treatment and myriad infidelities which led her to leave him, taking the children with her.

While still involved with Gilot, in 1951 Picasso had a six-week affair with Geneviève Laporte, who was four years younger than Gilot.  In his 70s, his work has as its theme an old, grotesque dwarf as the doting lover of a beautiful young model. Jacqueline Roque (1927–1986) worked at the Madoura Pottery in Vallauris on the French Riviera, where Picasso made and painted ceramics. She became his mistress, and then his second wife in 1961. The two were together for the remainder of Picasso’s life.

Throughout his life, Picasso maintained a number of mistresses in addition to his wife or primary partner. Picasso was married twice and had four children by three women.  This is why I say his driver was not love, it was sex.

During the Second World War, Picasso remained in Paris while the Germans occupied the city. Picasso remained 'personally neutral' during World War I, the Spanish Civil War, and World War II, refusing to join the armed forces for any side or country.  He was, however, a great supporter of the Communist Party, and in 1950 received the Stalin Peace Prize from the Soviet government.  He remained a loyal member of the Communist Party until his death.   His old friend André Breton, refusing to shake hands with Picasso, told him: "I don't approve of your joining the Communist Party, nor with the stand you have taken concerning the purges of the intellectuals after the Liberation".  So his inspiration was not anything to do with moral stands either.

So what was it?  Very simple really.  Drugs.  One of his biggest influences was the use of opium and other drugs.   Among his friends during this period was Jean Cocteau.  Cocteau was an openly avid user of opium.   Picasso made a few film appearances, always as himself, including a cameo in Jean Cocteau’s Testament of Orpheus.

Pablo Picasso died on 8 April 1973 in Mougins, France. Jacqueline Roque prevented his children Claude and Paloma from attending the funeral.   Jacqueline Roque took her own life by gunshot in 1986 when she was 59 years old.

Blindness is a recurrent theme in Picasso’s works, I wonder why.