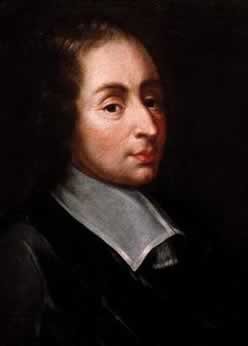 Blaise Pascal [June 1623 –August 1662 ]was a French mathematician, physicist, inventor, writer and philosopher. He may have been homosexual too, he certainly never married and his portraits show a very sensitive looking person, with a slightly feminine countenance [and hair style].

He was a child prodigy, who was educated by his father after his mother died. He grew up to be a mathematical genius in the natural and applied sciences, where he made important contributions to the study of fluids, invented a calculating machine, helped further development of probability theory and geometry, and clarified the concepts of pressure and vacuum.  And he had a number of very intense spiritual experiences, so intense that in later years he became a recluse and ascetic.

The cause of the experiences cannot all be attributed to angst.  Pascal had poor health from about 18 onwards, and his death came just two months after his 39th birthday.  An autopsy performed after his death, revealed grave problems with his stomach and other organs of his abdomen, along with damage to his brain. Brain damage is a major cause of many spiritual experiences.  Pascal also suffered from headaches severe enough to be classified as migraine.

So we have grief,  brain damage, migraine and organ failure.  No wonder he had spiritual experiences.

But none of these produced experiences as vivid and intense as those he had in 1654, three years after his father had died, when he was 31.  So significant was this experience, that he abandoned his scientific work, and devoted himself to philosophy and theology.

The combination of circumstances which led to this experience were partly based on money worries and partly on angst.  After his father had died in 1651, he left his inheritance to Pascal and his two sisters – Gilberte, who was married and Jacqueline - with whom Pascal had been living.  Jacqueline then announced that she would soon become a postulant in the Jansenist convent of Port-Royal.

Not surprisingly, Pascal was deeply affected by this.  He would lose his only companion and if he was gay, he would have great difficulty in ever finding another companion.  He was facing a life of considerable loneliness.  Added to this was the problem that he was in chronically poor health and had depended on her to look after him.

"Blaise pleaded with Jacqueline not to leave, but she was adamant. He commanded her to stay, but that didn't work, either. At the heart of this was...Blaise's fear of abandonment...if Jacqueline entered Port-Royal, she would have to leave her inheritance behind...[but] nothing would change her mind."

Gilberte had already been given her inheritance in the form of a dowry. In early January, Jacqueline left for Port-Royal. In early June 1653, Pascal formally signed over the whole of his sister's inheritance to Port-Royal.  With two-thirds of his father's estate now gone, the 29 year old Pascal was now consigned to ‘genteel poverty’.

And it was at this moment of angst that Pascal had his spiritual experience.