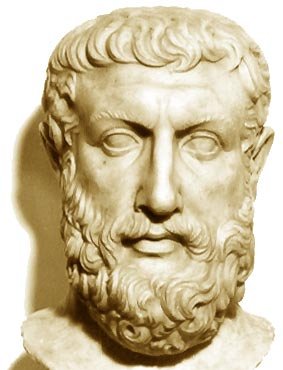 Head from a herm discovered at an excavation in Velia,
with the inscription
"Parmenides the son of Pyres the natural philosopher"

Parmenides of Elea (Greek: Παρμενίδης ὁ Ἐλεάτης;) is classified by most academics as a pre-Socratic Greek philosopher from Elea in Magna Graecia. But, although he did indeed write philosophically styled works, Parmenides was a mystic and a highly accomplished mystic.

He was descended from a wealthy and illustrious family. His dates are uncertain; according to Diogenes Laërtius, he flourished just before 500 BCE, which would put his year of birth near 540 BCE, but Plato has him visiting Athens at the age of 65, when Socrates was a young man, c. 450 BCE, which, if true, suggests a year of birth of c. 515 BCE.

Plato – Parmenides
Antiphon told us that Pythodorus had described to him the appearance of Parmenides and Zeno; .... the former was, at the time of his visit, about 65 years old, very white with age, but well favoured. Zeno [his pupil] was nearly 40 years of age, tall and fair to look upon; in the days of his youth he was reported to have been beloved by Parmenides. He said that they lodged with Pythodorus in the Ceramicus, outside the wall, whither Socrates, then a very young man, came to see them.

The single known work of Parmenides is a poem, On Nature, which has survived only in fragmentary form.  Approximately 160 lines of the poem remain today; reportedly the original text had 3,000 lines. It is known, however, that the work was originally divided into three parts:

The proem is a narrative sequence in which the narrator travels "beyond the beaten paths of mortal men" to receive a revelation from an unnamed goddess on the nature of reality. Aletheia, an estimated 90% of which has survived, and doxa, most of which no longer exists, are then presented as the spoken revelation of the goddess without any accompanying narrative. 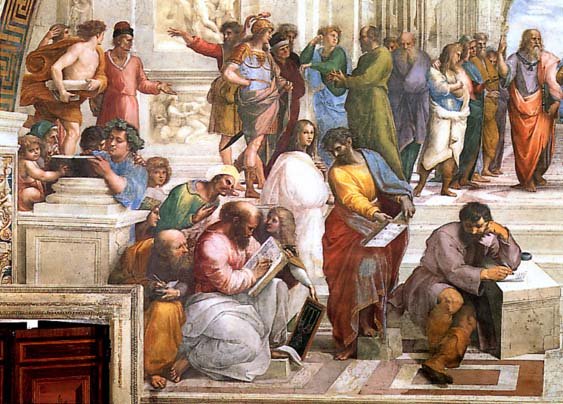 Current philosophers have made the assumption that Parmenides simply went on a long journey and met a seer, but all the indications from the text are that he went out of body and the goddess was a spirit helper.  The poem is also widely misunderstood.  It cannot be understood at all if all you believe in is a material world, as he is essentially describing the spiritual world in symbolic language.

In the poem, Parmenides describes Reality – which cannot be perceived with the 5 senses and is "the way of truth", whereas the physical world as perceived with the 5 senses is "the way of opinion".  He explains that the world of appearances as perceived by the 5 senses, leads to conceptions which are ‘false and deceitful’.  In other words he is strongly advocating the use of spiritual experience to understand what actually exists, as opposed to the false manufactured our 5 senses and perception system manufacture for us.

Plato, who was himself a mystic, greatly admired Parmenides and wrote a dialogue in his name.  He  appeared to Plato to be 'venerable and awe-ful,' [worthy of awe] and to have a 'glorious depth of mind' (Theaet.).

Introduction to Parmenides – Plato translated by Benjamin Jowett
The awe with which Plato regarded the character of 'the great' Parmenides has extended to the dialogue which he calls by his name. …The date is uncertain; the relation to the other writings of Plato is also uncertain; the connexion between the two parts is at first sight extremely obscure; and in the latter of the two we are left in doubt as to whether Plato is speaking his own sentiments …. or whether he is propounding consequences which would have been admitted by … Parmenides himself. …. To the latter part of the dialogue we may certainly apply the words: 'They went on their way rather regardless of whether we understood them or not.'

Thus in Plato's Parmenides we should also be able to find something of the findings of Parmenides on his spiritual travels.  Although we may have lost much of the vital evidence that Parmenides left in On Nature, we can fall back on Plato to get at least some of the lost details. 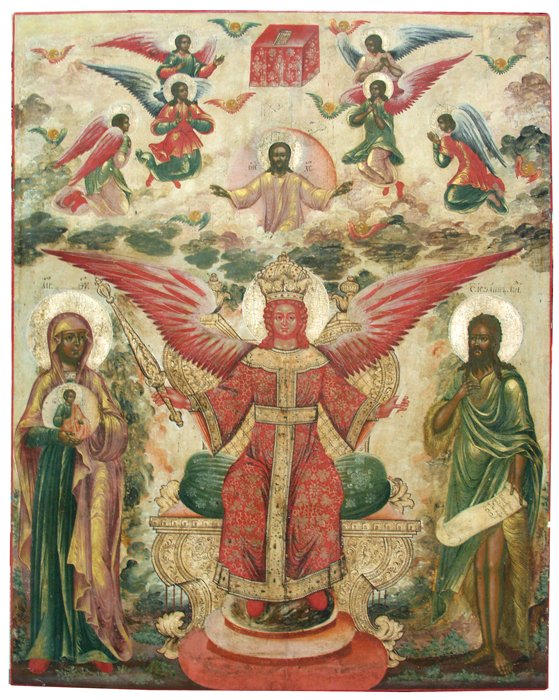 There are some that appear to argue that Parmenides, Plato and Pythagoras all had different competing schools of philosophy each with different ideas – in effect philosophically derived inventions.  But in this they completely misunderstand, completely.

We use the word philosophy these days to mean a rather dry academic discipline completely separate from any mystical content and requiring only memory and reasoning.  But the philosophers of Greece were as far away from this definition as one can get.  Greek philosophers were seekers after wisdom - and wisdom can only be gained by spiritual experience.

The word philosophy comes from Greek philosophia 'lover of wisdom'.  But Sophia has a very distinct meaning.  It means one is a lover of the Higher spirit through which wisdom is obtained.

Practically all Greek philosophers were Adepts from the Mysteries.  Parmenides, one suspects, was no different but I could find no direct evidence, whereas plenty of evidence exists for Plato and Socrates, for example.  The results of the process of initiation produced some quite profound effects.  First of all the Initiates lost all fear of death:
"Thanks to the Mysteries, death for mortals is not an evil but a good".
They also gained considerable powers - healing for example, and wisdom.  Every person who emerged from the process - both men and women - belonged to a secret society which moved and worked with higher purpose and profounder wisdom.  Diodorus wrote "It is said that those who have participated in the Mysteries become more spiritual, more just and better in every way". 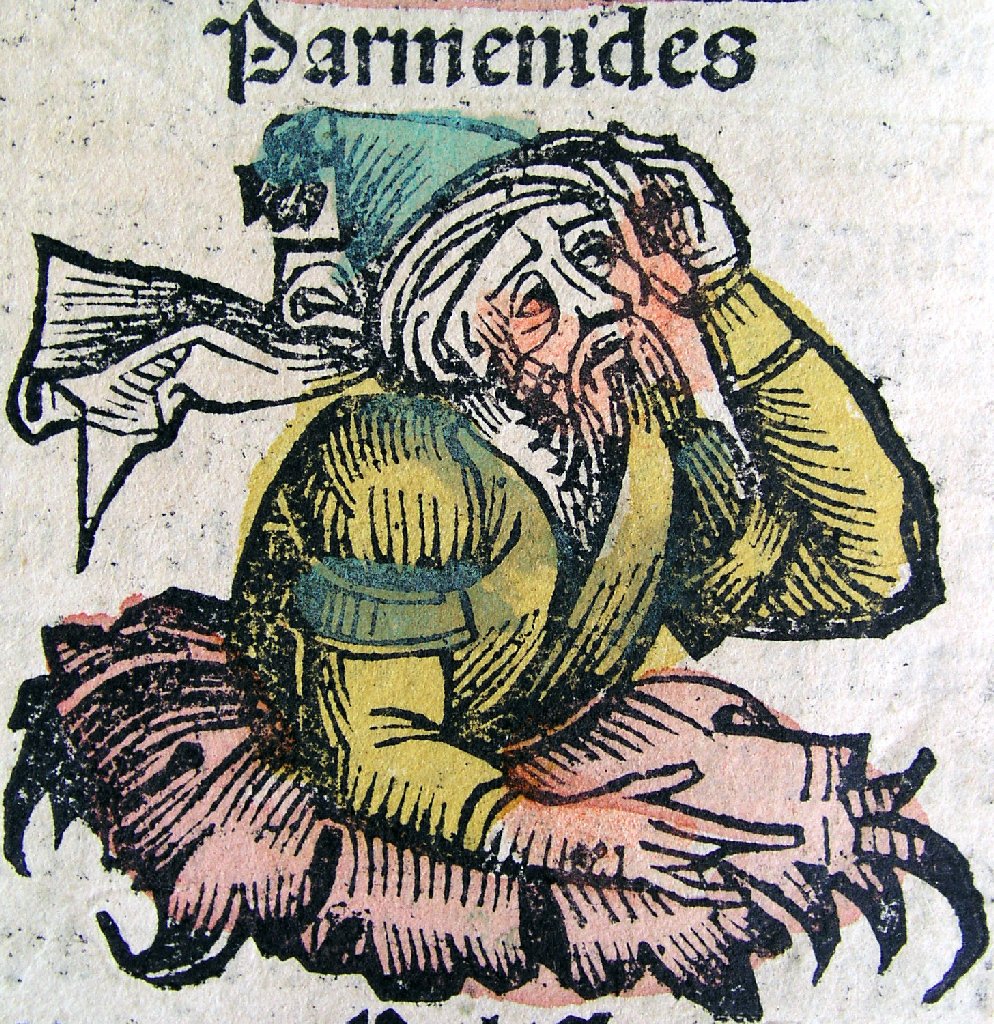 Thus anyone who reads On Nature needs to read it in this context to understand its meaning.

At times I am reminded of what it must have been like when Europeans first discovered America.  There will have been a large proportion of people who would dismiss the whole idea of America even existing – especially as many of them might even have continued to believe the earth was flat.  On each return, the narrator would have provided a description which was consistent with the existence of America but which differed in detail and terminology, simply because each visit would have produced new insights.  Those who did not believe in the existence of America would have picked on these differences to say that either America did not exist, or that all these explorers had different ideas – they were making it up - and so they had different versions.

Anyone who has had spiritual experience knows that the spirit world exists.  It is more vast than the physical world and contains features for which we have no words, as such it is difficult to describe for those who have never been.  And even 3000 years after Pythagoras, Plato and Parmenides described aspects of the spirit world, even with thousands if not millions of descriptions of the spirit world, we still are up against those who, because they are totally unable to conceive of its existence or have spiritual experience, think that Pythagoras, Plato and Parmenides are expressing philosophies, as opposed to experiences and differ in their views, when all that is happening is that they have seen different aspects.

Plato’s veneration for Parmenides may simply have been because Parmenides was a better out of body explorer than Plato was.

Parmenides - On nature
Welcome, noble youth, that comest to my abode on the car that bears thee tended by immortal charioteers ! It is no ill chance, but justice and right that has sent thee forth to travel on this way.

Far, indeed, does it lie from the beaten track of men ! Meet it is that thou shouldst learn all things, as well the unshaken heart of persuasive truth, as the opinions of mortals in which is no true belief at all.

For this shall never be proved, that the things that are, not are; and do thou restrain thy thought from this way of inquiry.