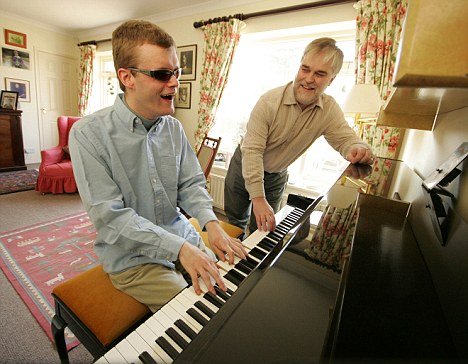 Derek Paravicini (born 26 July 1979) is a blind English autistic savant and a musical prodigy. He lives in London

Paravicini was born extremely prematurely, at 25 weeks. His blindness was caused by oxygen therapy given during his time in a neonatal intensive care unit. This also affected his developing brain, resulting in his severe learning disability. He also has autism.

He has absolute pitch and can play a piece of music after hearing it once. He began playing the piano by the age of two when his nanny gave him an old keyboard.

His parents arranged for him to attend the Linden Lodge School for the Blind in London. On his introductory visit to the school, in the music room he broke free from his parents, then headed straight for a piano being played, and then pushed the player, Adam Ockelford, aside to take over. Ockelford encouraged him and arranged first weekly and then daily lessons. Aged seven, Paravicini gave his first concert in Tooting Leisure Centre in South London.

In 1989, at the age of nine, Paravicini had his first major public concert at the Barbican Hall in London when he played with the Royal Philharmonic Pops Orchestra. In that year, he appeared on Wogan and was the main subject of a documentary called Musical Savants. Aged ten, he was presented with a Barnardo's Children's Champion Award by Diana, Princess of Wales. More opportunities followed, including playing at Ronnie Scott's Jazz Club

Paravicini's first album Echoes of the Sounds to Be was released on 27 September 2006. His official biography, In the Key of Genius by Adam Ockelford, was published in the UK on 3 May 2007.

More details about Derek, with photos, examples of him playing and a chance to purchase his music is provided on his website