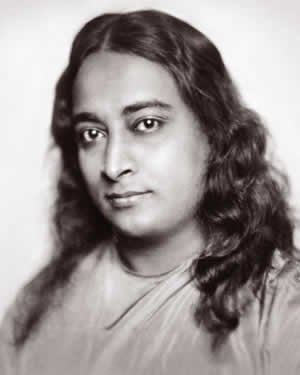 Paramahansa Yogananda (Bengali: পরমহংস যোগানন্দ) (5 January 1893 – March 7, 1952), born Mukunda Lal Ghosh (Bengali: মুকুন্দলাল ঘোষ), was an Indian yogi and guru who introduced millions of westerners to the teachings of meditation and Kriya Yoga through his book, Autobiography of a Yogi.

Yogananda was the first Hindu teacher of yoga to spend a major portion of his life in America. He lived there from 1920—1952, interrupted by a short trip abroad in 1935–1936 which was mainly to visit his guru, Yukteswar Giri in India.  Yukteswar died in 1936 in the town of Puri, whilst Yogananda was in Calcutta.

Autobiography of a Yogi describes Yogananda's ‘spiritual search for enlightenment’, in addition to encounters with famous figures such as Mohandas Gandhi, Rabindranath Tagore, Sir Jagadish Chandra Bose and Nobel laureate in physics Sir C. V. Raman.  Yogananda also wrote the Second Coming of Christ: The Resurrection of the Christ Within You;  God Talks With Arjuna — The Bhagavad Gita;  and The Self-Realization Fellowship Lessons.

Yogananda’s teaching is based on the idea of the Great Work, destiny, challenges and all the other concepts commonly recognised in spiritual systems

Echoing traditional Hindu teachings, he taught that the entire universe is God's cosmic motion picture, and that individuals are merely actors in the divine play who change roles through reincarnation. He taught that mankind's deep suffering is rooted in identifying too closely with one's current role, rather than with the movie's director.

The "science" of Kriya Yoga was the foundation of Yogananda's teachings. The Sanskrit root of kriya is kri, to do, to act and react. Yogananda gave a general description of Kriya Yoga in his Autobiography:

The Kriya Yogi mentally directs his life energy to revolve, upward and downward, around the six spinal centers [chakras] which correspond to the twelve astral signs of the zodiac, the symbolic Cosmic Man. One-half minute of revolution of energy around the sensitive spinal cord of man effects subtle progress in his evolution; that half-minute of Kriya equals one year of natural spiritual unfoldment.

In effect he taught how to control kundalini energy.

Yogananda was born in Gorakhpur, Uttar Pradesh, India to a devout Hindu family. In his youth he sought out many of India's Hindu sages and saints, hoping to find an illuminated teacher to guide him in his spiritual quest.  The quest ended when he met his guru, Swami Yukteswar Giri, in 1910, at the age of 17: 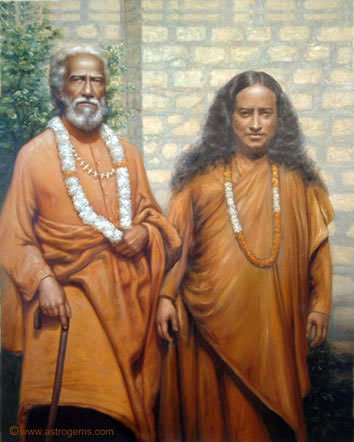 Autobiography of a Yogi, 1997
We entered a oneness of silence; words seemed the rankest superfluities. Eloquence flowed in soundless chant from heart of master to disciple. With an antenna of irrefragable insight I sensed that my guru knew God, and would lead me to Him. The obscuration of this life disappeared in a fragile dawn of prenatal memories. Dramatic time! Past, present, and future are its cycling scenes. This was not the first sun to find me at these holy feet!

After passing his Intermediate Examination in Arts from the Scottish Church College, Calcutta, in June 1915, he graduated with a degree similar to a current day "Bachelor of Arts" or B.A. (which at the time was referred to as an A.B.), from the Serampore College, a constituent college of the University of Calcutta. This allowed him to spend time at Yukteswar's ashram in Serampore. In 1915, he took formal vows into the monastic Swami Order and became 'Swami Yogananda Giri'.

In 1917, Yogananda founded a school for boys in Dihika, West Bengal that combined modern educational techniques with yoga training and spiritual ideals. A year later, the school relocated to Ranchi. This school would later become the Yogoda Satsanga Society of India, the Indian branch of Yogananda's American organization the Self-Realization Fellowship. 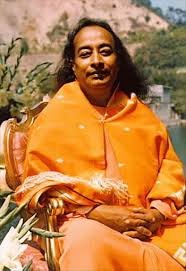 In 1920, Yogananda went to the United States, as India's delegate to an International Congress of Religious Liberals convening in Boston.  There he founded the Self-Realization Fellowship (SRF) to disseminate worldwide his teachings on India's ancient practices and philosophy of Yoga and its tradition of meditation.   For the next few years, he lectured and taught on the East coast and in 1924 embarked on a cross-continental speaking tour.  The following year, he established an international center for Self-Realization Fellowship in Los Angeles, California, which became the administrative headquarters of his growing network of centres.

Yogananda continued to lecture, write, and establish centres in southern California. He took up residence at the SRF hermitage in Encinitas, California.  It was while at this hermitage that Yogananda wrote Autobiography of a Yogi.

The last four years of his life were spent primarily in seclusion with some of his inner circle of disciples at his desert ashram in Twenty-nine Palms, CA to finish his writings and to finish revising books, articles and lessons written previously over the years.  During this period he gave few interviews and public lectures. He told his close disciples, "I can do much more now to reach others with my pen."

Yogananda died on March 7, 1952, whilst attending  a dinner for the visiting Indian Ambassador to the US, Binay Ranjan Sen, and his wife at the Biltmore Hotel in Los Angeles.  At the end of his speech his body slumped to the floor. The official cause of death was heart failure.

Yogananda's remains are interred at the Forest Lawn Memorial Park in Glendale, California.

The Self-Realization Fellowship (SRF)/Yogoda Satsanga Society of India still has its headquarters in Los Angeles and has grown to include more than 500 temples and centers around the world.  Many of the teachers are now women.