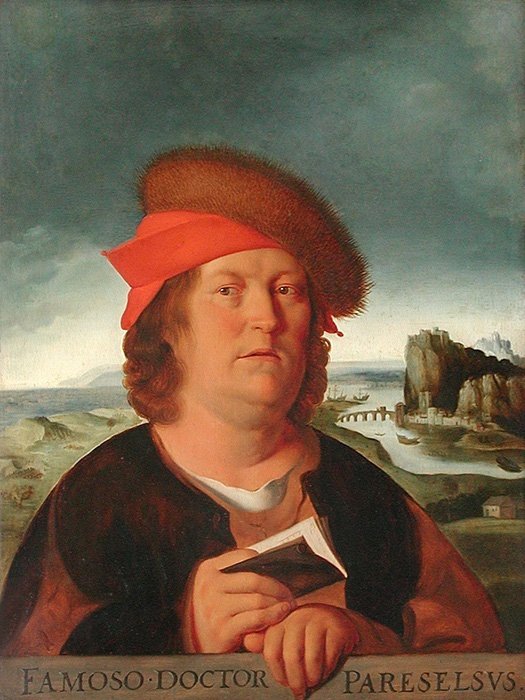 Paracelsus was born December 1493 in Einsiedeln, Switzerland and died September 1541 in Salzburg, Austria.

He was  a Medieval physician,  alchemist, astrologer, and general occultist.   Paracelsus was also a drug user.  He experimented with the medical value of opium and decided that its medical (analgesic) value was of such magnitude that he called it Laudanum, from the Latin laudare, to praise. He did not know of its addictive properties.

Paracelsus pioneered the use of chemicals and minerals in medicine.  He is credited for giving zinc its name, calling it zincum and is regarded as the first systematic botanist.

Born Phillip von Hohenheim, he later took up the name Philippus Theophrastus Aureolus Bombastus von Hohenheim, and still later took the title Paracelsus, meaning "equal to or greater than Celsus".   Aulus Cornelius Celsus was a Roman from the first century known for his tract on medicine. 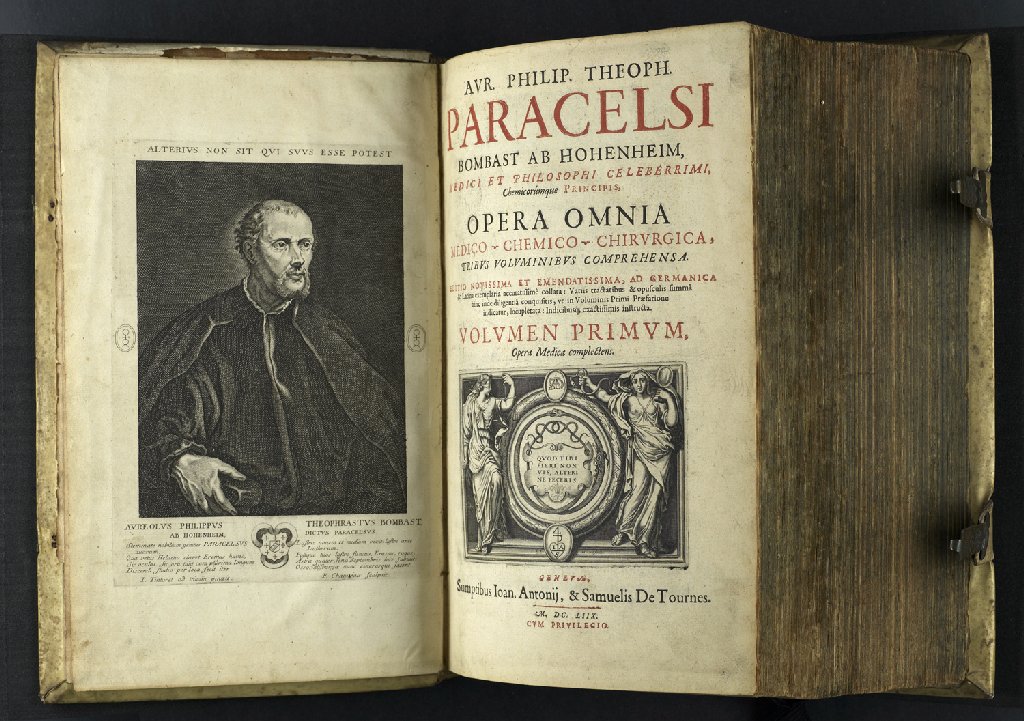 Paracelsus rejected Gnostic traditions, but kept much of the Hermetic, neoplatonic, and Pythagorean philosophies he learned from Ficino and Pico della Mirandola.

The influences of hermeticism and particularly their approach to harmony, led Paracelsus to believe the universe's macrocosm was represented in every person as a microcosm. Paracelcus viewed the universe as one coherent organism pervaded by a uniting life-giving spirit, and this in its entirety, man included, was 'God'. His views put him at odds with the Church, for whom there necessarily had to be a difference between the Creator and the Created.

Paracelsus also believed in the Greek concept of the four elements [Levels and layers]. 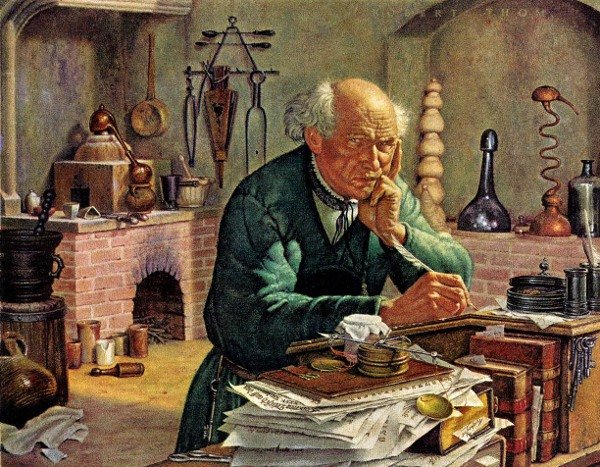 He believed that sickness and health relied on the harmony of man (the microcosm) and Nature (macrocosm), that humans needed to have a balance of minerals in their bodies, and that certain illnesses could be cured by chemical remedies.

At the time that Paracelsus was practising, medicine was still under the influence of people such as Hippocrates and Galen.  Hippocrates put forward the theory that illness was caused by an imbalance of the ‘four humours’: blood, phlegm, black bile and yellow bile [note that these are symbolic not physical concepts]. These ideas were further developed by Galen into an extremely influential and highly persistent set of medical beliefs that were to last until the mid 1850s. The dominant medical treatments at Paracelsus' time were specific diets to help in the "cleansing of the putrefied juices" combined with purging and bloodletting to restore the balance of these ‘four humours’. Paracelsus challenged this view with his beliefs that illness was the result of the body being attacked by outside agents. 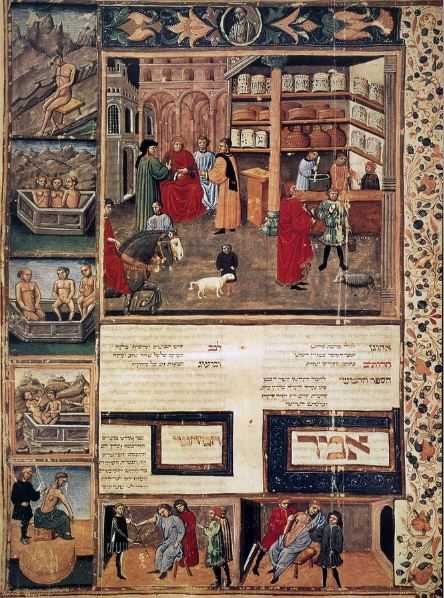 Paracelsus main hypothesis was that diseases were caused by ‘poisons’. But the definition of poison was not substance related,  'poisons' were created when substances interacted, and when the dose was wrong.  In effect, only the dose determined if a substance was poisonous or not.  He said

"All things are poison and nothing is without poison, only the dose permits something not to be poisonous.

That is to say, substances often considered toxic can be benign or beneficial in small doses, and conversely an ordinarily benign substance can be deadly if over-consumed [even water, which we now know to be true].  These views are not dissimilar to those espoused by homeopathic medicine.

He said that because everything in the universe was interrelated, beneficial medical substances could be found in herbs, minerals and various alchymical combinations.  He summarized his own views:

Many have said of Alchemy, that it is for the making of gold and silver. For me such is not the aim, but to consider only what virtue and power may lie in medicines.

Paracelsus also introduced the idea that, on another level, the cosmos was fashioned from three spiritual substances: the tria prima of Mercury, Sulfur and Salt. These names were symbols used to represent: 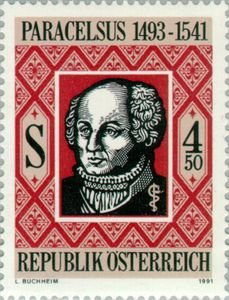 By understanding the state of these spiritual tria prima, a physician could discover the means of curing disease.  Note that this is a similar idea to that used in Chinese medicine and is also promoted by many spiritual healers today.  If your mind and soul are in balance [yin/yang] and free of worry, you are better able to fight disease.

Since Paracelsus promoted his views, many have taken his ideas literally believing that he promoted the use of mercury salt and sulphur as medicines, but this is not true.  As Madame H.P. Blavatsky, said in Isis Unveiled:

"Paracelsus, the alchemists, and other mystics, meant by mercurius vitae, the living spirit of silver, the aura of silver, not the argent vive; and this aura is certainly not the mercury known to our physicians and druggists. There can be no doubt that the imputation that Paracelsus introduced mercury into medical practice is utterly incorrect. No mercury, whether prepared by a mediaeval fire-philosopher or a modern self-styled physician, can or ever did restore the body to perfect health. Only an unmitigated charlatan ever will use such a drug. And it is the opinion of many that it is just with the wicked intention of presenting Paracelsus in the eyes of posterity as a quack, that his enemies have invented such a preposterous lie."

It is worth noting that Paracelsus rubbed up a number of people the wrong way and was considered by some of his contemporaries as somewhat arrogant.  As such, one suspects his ‘enemies’ probably conspired to discredit him with allegations of this sort. 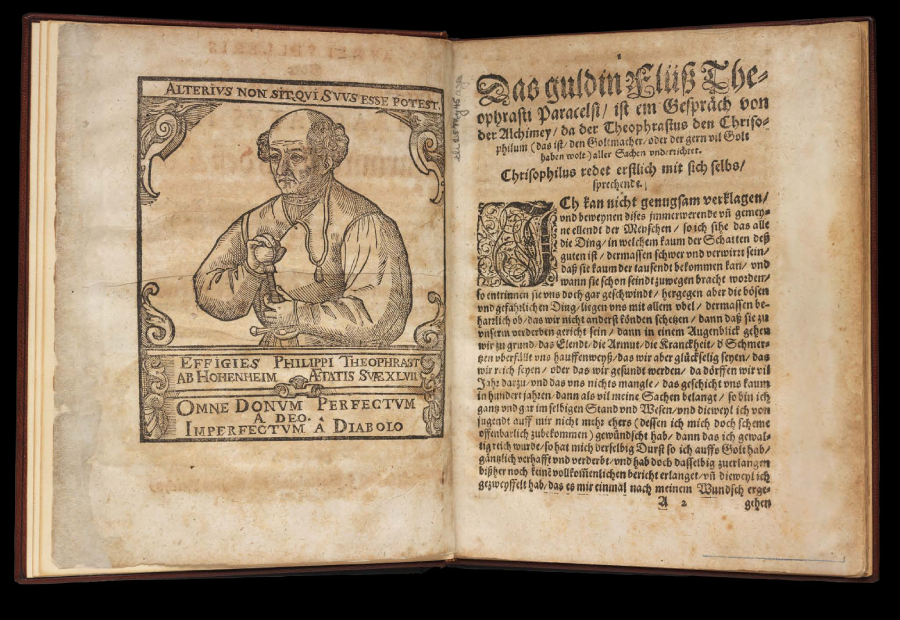 Paracelsus was, however, not without his quirky side.  He was a practicing astrologer, as were most, if not all, of the university-trained physicians working at this time in Europe. Despite professing to not believing in magic and despite rejecting the magic theories of Agrippa and Flamel, in his Archidoxes of Magic Paracelsus devoted several sections to astrological talismans for curing disease, providing talismans for various maladies as well as talismans for each sign of the Zodiac. He also invented an alphabet called the Alphabet of the Magi, for engraving angelic names upon talismans.

It may be worth adding that since we are only now beginning to recognise the power of the placebo effect, his 'magic' may have been years ahead of its time - the first placebo based medicine.

Paracelsus is credited as providing the first clinical/scientific mention of the subconscious. In this context he followed up the ideas he had developed on the link between mind and disease.  In his work Von den Krankeiten he writes:

"Thus, the cause of the disease chorea lasciva is a mere opinion and idea, assumed by imagination, affecting those who believe in such a thing. This opinion and idea are the origin of the disease both in children and adults. In children the case is also imagination, based not on thinking but on perceiving, because they have heard or seen something. The reason is this: their sight and hearing are so strong that unconsciously they have fantasies about what they have seen or heard."