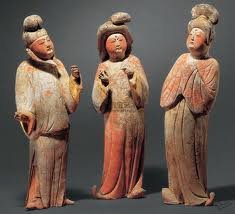 Ouyang Xiu (1007 – September 22, 1072) was a Chinese statesman, historian, essayist, calligrapher and poet of the Song Dynasty.

He is also known by his courtesy name of Yongshu, and was also self-nicknamed Householder of the One of Six 六一居士 in his old age.

Ouyang was one of the major players in the Qingli Reforms of the 1040s and was in charge of creating the New History of the Tang Dynasty. He was regarded as one of the great masters of prose of the Tang and Song era and was a noted writer of both shi and ci poetry.

He was born in Jishui, Jiangxi where his father was a judge. His family was relatively poor, not coming from one of the old great lineages of Chinese society.

Losing his father when he was three, his literate mother was responsible for much of his early education. He was unable to afford traditional tutoring and was largely self-taught. The writings of Han Yu, a literatus from the late Tang Dynasty were particularly influential in his development. He passed the jinshi degree exam in 1030 on his third attempt at the age of 22.

In his youth, be became somewhat notorious for an 'undisciplined personal life', including 'frequenting pleasure quarters and keeping the company of courtesans'.

At the same time, he also associated with like-minded scholar officials, with whom he regularly exchanged ideas on philosophy and literary modes.

He preferred guwen (Ancient Prose) from an early age. By the age of thirty, he gave up the impulses of his youth and ‘expressed regret at coming to an understanding of the Way rather late’.

His poems are generally relaxed, humorous and often self-deprecatory. His shi are stripped-down to the essentials emphasised in the early Tang period, eschewing the ornate style of the late Tang. He is best known, however, for his ci, which he was instrumental in raising to the level of being an important and widespread Song poetic style. In particular, his series of ten poems entitled West Lake is Good set to the tune Picking Mulberries helped to popularise the genre as a vehicle for serious poetry. 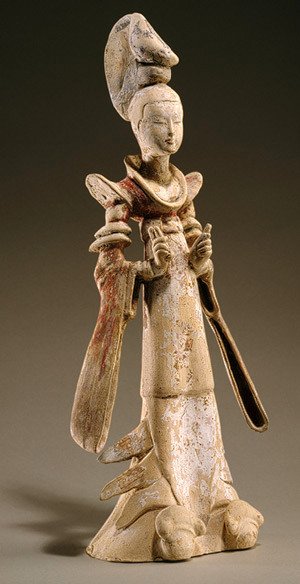 Ouyang's poetry, especially the mature works of the 1050s, dealt with new themes that previous poets had avoided.

These include interactions with friends, family life, food and beverages, antiques, and political themes.

He also used an innovative style containing elements that he had learned from his prose writing. Ouyang's poetry bears the characteristic of literary playfulness common to Northern Song poetry. For example, many poems have titles that indicate that they originated in rhyme games, and feature extensive rhyming schemes throughout.

Wang Anshi referred to him as the greatest literary figure of his age.  Li Dongyang, the highest official in the Hanlin Academy during the Ming Dynasty, was an admirer of Ouyang Xiu, regarding him as "an ideal example of the scholar-official committed to both public service and literary art", and he praised  his writings for their ‘tranquility and propriety’.

Ou-Yang Hsiu of Lu-Ling lived from A.D. 1007-1072.   With the completion of the T`ang dynasty, it was my design to bring this work to conclusion. I have, however, decided to include Ou-Yang Hsiu of the Sung dynasty, if only for the sake of his "Autumn", which many competent critics hold to be one of the finest things
in Chinese literature.

His career was as varied as his talents.

In collaboration with the historian Sung C`hi he prepared a history of the recent T`ang dynasty. He also held the important post of Grand Examiner, and was at one time appointed a Governor in the provinces.

It is difficult to praise the "Autumn" too highly. With its daring imagery, grave magnificence of language and solemn thought, it is nothing less than Elizabethan, and only the masters of that age could have done it justice in the rendering.