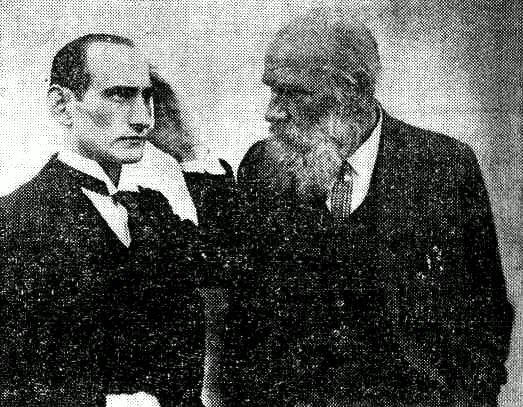 He became a naturalized citizen of the USA in the thirties, and changed his name to Roman Ostoja then.  He died on June 15, 1974.

We know practically nothing about the history or life of Ostoja other than the fact he was from Poland.  The name Ostoja is an extremely distinguished one.  Clan Ostoja (ancient Polish: Ostoya) was a powerful group of knights and lords in late-medieval Europe. The Clan encompass families in the Polish-Lithuanian Commonwealth, Upper Hungary (Slovakia), Hungary, Transylvania, Belarus, Ukraine, and Prussia.  During the Polish-Lithuanian Commonwealth, the Clan held high positions, and held a great amount of land and properties in both Commonwealth and in Upper Hungary, including many great gothic style castles. Members of the Clan of Ostoja ruled several feudal lordships in Upper Hungary between 1390 and 1434 and Transylvania in 1395-1401 and again in 1410-1414, during the time of Duke Stibor of Stiboricz.

The Clan was involved in every war Poland participated in, and during the partition of the Polish-Lithuanian Commonwealth they can be seen in every movement and uprising, fighting against foreign forces. The clan put high value on education and were often inventors, poets and scientists.  As such if Roman Ostoja’s name is based on genuine family roots, his origins were most prestigious. 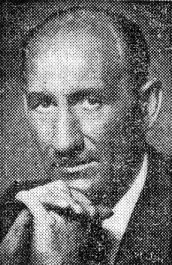 Ostoja was a magician, a clairvoyant and could read minds.  His skills were somewhat similar to those of Tahra Bey, and indeed he too could perform the feat of the fakir and be buried alive.  According to a December 1953 article about him in Fate Magazine called Man of Miracles, he could bury himself alive for up to days at a time “to prove that man can survive for long periods of time in a state of suspended animation without air, food or water.” It was an extremely odd performance. He’d go into a hypnotic state, where “During the process he turned his tongue backward and swallowed it, so as to allow no air to enter and leave his lungs.” Physicians would verify that he had no pulse.

Upton Sinclair and his wife Craig got to know him and it is partly through them that we know of the feats he was capable of.  In their book Mental Radio they call him ‘Jan’:

The psychic Jan gives such "autosuggestions" to himself when he goes into a trance, and tells his trance mind to bring him out at a certain moment. How that trance mind can measure time as exactly as a clock is another of the mysteries; but that it happens is beyond doubt. My wife took Jan to a group of scientists in Boston, and several of them held watches and expressed their surprise at what Jan was able to do. It is obvious that when the psychic lets himself be buried six feet under the ground in an ordinary pine-wood coffin, he is staking his life upon his certainty that he will not come out of the state of lethargy until after he has been dug up.

He also stakes it upon the hope that the physicians who have the test in charge will have sufficient sense to realize the importance of having him dug out at the time agreed. In one case they were several minutes late, and Jan nearly suffocated. I never saw one of these burials, because Craig obtained his promise not to do them after she knew him; but I have talked with several physicians who watched and directed all the details, and I have a moving-picture film of one. 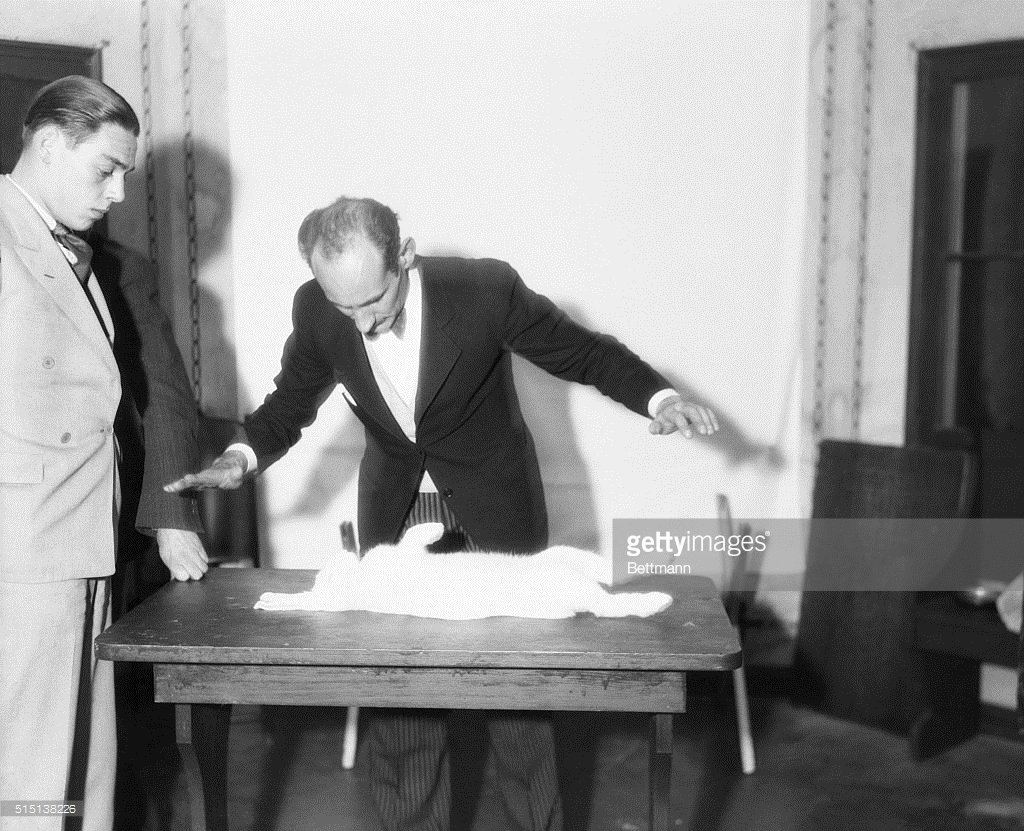 Hypnotizing A Rabbit. “Among the amazing accomplishments of Count Roman Ostoja, a Polish nobleman, is that of hypnotizing domestic fowls and animals. In this photo, he has hypnotized a rabbit. The Count is thrilling the film and society notables of Hollywood with bizarre and rare adventures. He pierces his tongue and hands with spikes, rests on a bed of nails and goes into suspended animation spells. He lists these feats under the heading of scientific experiments in an effort to prove that he has mastered himself spiritually, mentally and physically”.

Roman Ostroya and the Sinclairs

It was the contact made between Ostroya and particularly Mary Craig Sinclair that propelled Mary onto the path of trying her own experiments.  After puzzling over it for a year or more, she said: "There is only one way to be certain. I am going to learn to do these things myself!"

This young man, …. was a peculiar person. Sometimes he would be open and frank, and again he would be mysterious and secretive. At one time he would agree to teach us all he knew, and again he would hold on to his arts, which he had had to go all the way to India to get. Was it that he considered these forces too dangerous for amateurs to play with? Or was it merely that he was considering his means of livelihood? 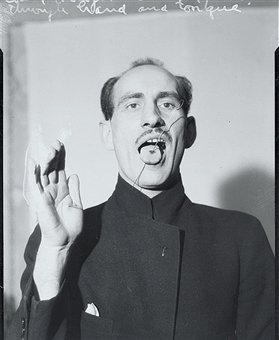 Ostroja could hypnotise people and Craig had come to realize that all illness is more or less amenable to suggestion.

She had had the idea of being hypnotized and given curative suggestions; but because she did not know enough about Ostroja she eventually thought better of it.

After she got to know him better, however, her purposes changed. She told him to go ahead and hypnotize her, but secretly with the actual objective of her hypnotising Ostroja.

Jan fixed his eyes upon hers in the hypnotic stare, and made his magnetic passes; at the same time his patient stared back, and I sat and watched the strange duel of personalities.
An essential part of Jan's technique, as he had explained it, was in outstaring the patient and never blinking his eyes. Now suddenly he blinked; then he closed his eyes and kept them closed.
"Do your eyes hurt?" asked his patient, in pretended innocence.
"No," he replied.
"Are you tired?" she asked.
"No, thank you," said he.
"What was I thinking?" she asked.
"To hypnotize me," he replied, sleepily.
But Craig wanted further proof, so she closed her eyes and willed that Jan should get up and go to the telephone.
"Shall I go on treating you?" he asked.
"Yes," said she. He hesitated a moment, then said, "Excuse me, I have to telephone to a friend!"………………


This rapport between Craig and her protégé was developed to such an extent that she could tell him what was in his mind, and what he had been doing; she told him many stories about himself, where he had been and what he had done at a certain hour. This was embarrassing to a young man who perhaps did not care to have his life so closely overseen; also, possibly, he was wounded in his amour propre, that a mere amateur—and a woman at that—should be coming into possession of his secret arts………………..

Whatever came to Craig, she would write it out, and when next she met Jan, she would use her woman's wits to verify it without Jan's knowing what was happening. At times it would be very amusing—when he would find himself accused of some youthful misdemeanor which his preceptress was not supposed to know about. In his efforts to defend himself, he would fail entirely to realize the telepathic aspects of the matter. 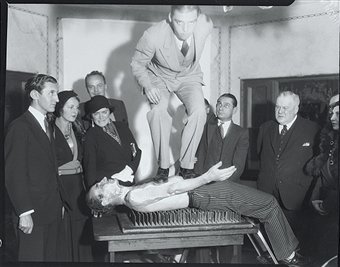 The unreliable nature of Ostroja’s powers

Unlike Tahra Bey, Ostroja did not seem to have the same control of his powers.  He was very susceptible to what can only be called stage fright and failed on a number of important occasions to come up with the goods.  This had extremely sad repercussions as many then assumed he was a fraud, when in fact he was just extremely nervous, could not perform to order and appeared to be much more talented when in the company of those who were sympathetic and kindly to him.

On one occasion, Upton Sinclair asked Ostoja to conduct a seance at his house to which would be invited not only Einstein, but Richard Tolman, soon to be chief scientific adviser to the Manhattan Project, and Paul Epstein, Caltech's professor of theoretical physics.

Needless to say, Ostroja was somewhat over-awed, and not at all at his ease at the start of the evening.  The problems were then exacerbated when Sinclair in all his innocence, built up expectations by addressing the learned crowd, warning them ‘not to panic’, as at a previous séance, Ostoja had managed to levitate a table, while in a trance.

The pressure was now really on, as not only was Ostroja’s reputation at stake, so was Sinclair’s.  If Ostoja could not repeat the performance for the scientists, the world might ridicule Sinclair's interest in the area.  Helen Dukas, Einstein's secretary, remembered being "frightened to death" by the proceedings.

Ostoja managed to go into a cataleptic trance and began mumbling incomprehensible words.  But the pressure was simply too much.  Silence fell and the table did shake, but then, remembered Dukas, "nothing happened".

Mr Cecil Smith, Attila von Szalay and Raymond Bayless also tried to test Ostoja and held two séances, again with no results.  Ostoya fell to the floor at the end of the second sitting with his mouth covered in blood. Bayless rather uncharitably suggests he was faking this, but it was very clear that just like the Einstein séance, Ostroja found such pressure impossible to handle.  He warned them prior to the sittings, that the powers they were expecting may not manifest.  Szalay of all people should have recognised the problem and been more sympathetic, but there may have been an element of rivalry here, as he came from Hungary himself.

The rather annoying aspect of Bayless’s account is that they virtually ignored what he could do on that occasion and it has many interesting links with kinesiology that could have been explored.

After the second séance, Ostoja gave an interesting display of muscle reading.  This effect consists of holding a subject who knows where a hidden object has been placed and by interpreting slight inadvertent motions is quickly able to find the target object.  He was most proficient at this.