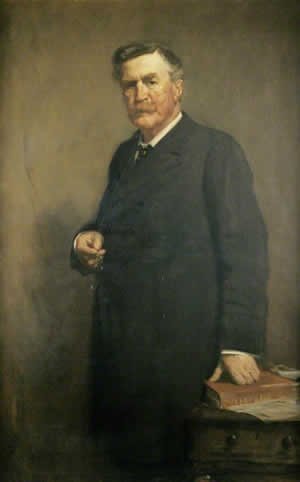 Sir Alexander Ogston KCVO MB FRS CM MD was a Scottish surgeon, famous for his discovery of Staphylococcus. He was born in Aberdeen in 1844 and died there in 1929.

Ogsten was reported to have called on Joseph Lister and rigorously followed his antiseptic principals. These are aptly phrased in a small ditty composed by his students.

The spray, the spray, the antiseptic spray
A.O. would shower it morning, night and day
For every sort of scratch
Where others would attach
A sticking plaster patch
He gave the spray.

Ogsten encountered a great deal of difficulty convincing the medical establishment of his observations on Staphylococcus. The Aberdeen branch of the BMA, received his findings with disbelief.  The editor of the British Medical Journal stated at the time ‘can anything good come out of Aberdeen’.

After a careful study of the evidence presented by Ogsten, his contemporary, Joseph Lister agreed with his findings, however, another peer, Watson Cheyne was still skeptical. Given this local skeptisim, Ogsten decided to present his discoveries to a surgical congress in Berlin where he had previously presented a paper “genu valgum” on 9 April 1880. Ogsten delivered this presentation on absesses in German which was then published. He was subsequently made a ‘Fellow’ of the German Surgical Society despite his youth (36 years old). The next year Ogsten published his observations in the British Medical Journal. After this point his papers were refused and instead he published in the Journal of Anatomy and Physiology.

Ogston served in the 1884 Egyptian War and the Boer War. He was also instrumental in arguing for the creation of the Royal Army Medical Corps in 1898. During the First World War when over seventy years old, he was sent to assist with the management of severe trauma.

Just as an aside - they are still doing extremely important and ground breaking work in Scotland this time at St Andrews University, just south of Aberdeen  - see this LINK.