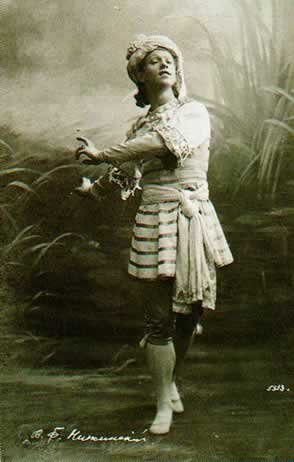 Vaslav Nijinsky (1889 –1950) was a Russian dancer and choreographer of Polish descent.

He has been described as “the greatest male dancer of the early 20th century celebrated for his virtuosity and for the depth and intensity of his characterizations”. He could perform en pointe, a rare skill among male dancers at the time and his ability to perform seemingly gravity-defying leaps was legendary.

He was a sensual performer often employing quite overtly sexual moves.  He also cultivated a deliberately androgynous look.  Nijinsky is immortalized in numerous still photographs, many of which were made by E.O. Hoppé, who extensively photographed the Ballets Russes London seasons between 1909 and 1921, but he was sadly never filmed.

Nijinsky was introduced to dance by his parents, who were senior dancers with the travelling Setov opera company and his early childhood was spent touring with the company. Aged 9 he joined the Imperial Ballet School in St Petersburg, the pre-eminent ballet school in the world.

Nijinsky suffered considerably as a child prodigy.  He was teased for being Polish, given the nickname "Japonczek" for his faintly Japanese looks at a time Russia was at war with Japan. And his dancing ability raised the resentment of some of his classmates. An incident in 1901 when one of the class deliberately caused him to fall led to his being in a coma for four days. 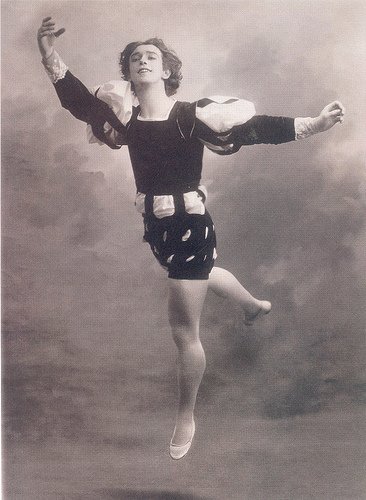 Not only could he dance but he was good at music, he studied piano, flute, balalaika and accordion, and was able to hear and then play music on the piano, even  though his sight reading was relatively poor. Against this, his behaviour was sometimes boisterous and wild, resulting in his temporary expulsion from the school in 1903 for an incident involving students shooting at the hats of passers-by with catapults.

Everything written about him seems to point to a talent gifted to him by an almost total openness of his ‘right brain’ and through his feminine side [hence the androgynous nature of his work and costumes] he appeared to be in permanent touch with the spirit world via his Higher spirit.  Maybe he was his Higher spirit!

Nijinsky's Diary written during the six weeks he spent in Switzerland before being committed to an asylum, combined elements of autobiography with appeals for compassion toward the less fortunate, and for vegetarianism and animal rights. Nijinsky writes of the importance of feeling, as opposed to reliance on reason and logic.  Thus everything he did and achieved was not achieved via intellect but inspiration. 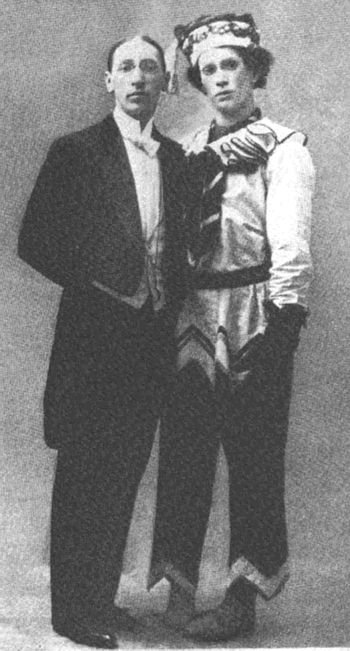 A turning point for Nijinsky was his meeting Sergei Diaghilev, a celebrated and highly innovative producer of ballet and opera as well as art exhibitions, a man who concentrated on promoting Russian visual and musical art abroad, particularly in Paris. The 1908 season of colorful Russian ballets and operas, works mostly new to the West, was a great success, leading him to plan a new tour for 1909 with a new name for his company, the now famous Ballets Russes.  Nijinsky became the company's star male dancer, causing an enormous stir amongst audiences whenever he performed.

And Nijinsky and Diaghilev became lovers with Diaghilev heavily involved in directing and managing Nijinsky's career.

In 1912 Nijinsky began choreographing his own ballets, including L'après-midi d'un faune (1912), Jeux (1913), and Till Eulenspiegel (1916). At the premier of Le Sacre du Printemps  (1913) fights broke out in the audience between those who loved and hated a totally new style of ballet. Faune frequently caused controversy because of its sexually suggestive final scene. Jeux was originally conceived as a flirtatious interaction between three males, although Diaghilev insisted it be danced by one male and two females.

And then everything went pear shaped.  In March 1912 the recently engaged Romola de Pulszky was taken to see the Ballets Russes in Budapest by her prospective mother-in-law and was greatly impressed. Nijinsky had not been performing, but she returned the following day and saw him:

An electric shock passed through the entire audience. Intoxicated, entranced, gasping for breath, we followed this superhuman being... the power, the featherweight lightness, the steel-like strength, the suppleness of his movements.. 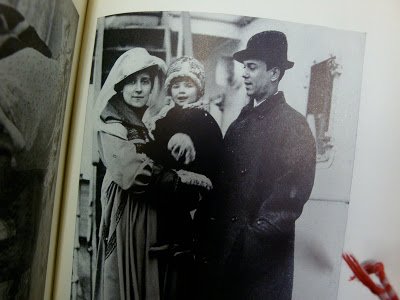 Romola with their daughter and Vaslav

Romola broke off her engagement and began following the Ballets Russes across Europe, attending every performance she could. Nijinsky was difficult to approach, being always accompanied by a 'minder'. She and Nijinsky shared no common language; she spoke French but he knew only a little. He ignored her.

Romola did not give in. She took every opportunity to be near Nijinsky, booking train compartments or cabins close to his.  On board ship, Romola had a cabin in first class, which allowed her to keep a watch on Nijinsky's door, while most of the company were exiled to second class. Determined to take every opportunity, she succeeded in spending more and more time in his company. And then for reasons which have never been properly explained, Baron de Gunsbourg, an investor in the Ballets Russes, agreed to act on Nijinsky's behalf in presenting a proposal of marriage to Romola. Romola thought a cruel joke was being played on her, and ran off to her cabin crying. However, Nijinsky asked her again, in broken French and mime, and she accepted.

The couple were married on 19 September 1913 and the fact was announced to the world's press. Back in Europe, Diaghilev:

The marriage caused an immediate break with Diaghilev, who dismissed Nijinsky from the company. With no alternative employer available, he attempted to form his own company but this was not a success.

Eventually, Nijinsky became ill and could not perform. He missed three days, and the management had had enough. The show was cancelled and Nijinsky was left with a considerable financial loss. Newspapers reported a nervous breakdown.

During  World War I Nijinsky was put under house arrest.  He was interned until 1916, finally being allowed to leave after intervention by Diaghilev. But Nijinsky became increasingly mentally unstable with the stresses of having to manage tours himself and deprived of opportunities to dance, which had always been his total obsession.

After a tour of South America in 1917, he Romola and their child settled in Switzerland, where his mental condition continued to deteriorate. The rest of his life was spent suffering from mental illness which incapacitated him beyond the ability to dance again in public. 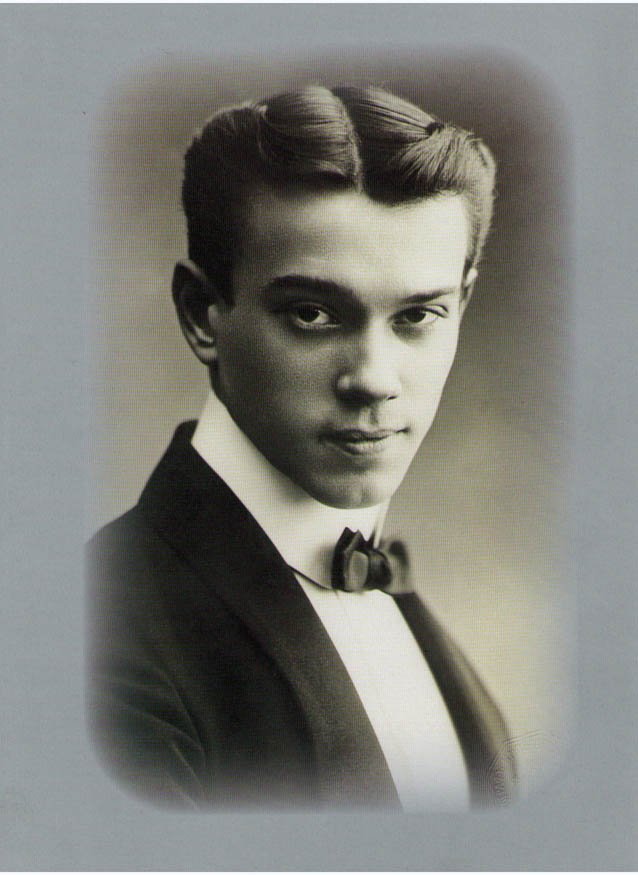 There is an indication that mental illness ran in the family, Vaslav’s brother became increasingly mentally unstable and was admitted to an asylum for the insane in 1902.

He was diagnosed with ‘schizophrenia’ but was treated unsuccessfully by psychiatrist Eugen Bleuler.  Nijinsky spent the rest of his life in and out of psychiatric hospitals and asylums.

During the last days of World War II, he danced in public for the last time.

He encountered a group of Russian soldiers decamped outside of Vienna, playing traditional folk tunes. Inspired by the music and his reunion with his countrymen, he leapt into an exquisite dance, astounding the men with the complexity and grace of his figures. The experience restored some of Nijinsky's capacity for communication, after having maintained long periods of almost absolute silence.

Nijinsky died in a clinic in London on April 8, 1950, and was buried in London until 1953 when his body was moved to Montmartre Cemetery in Paris.