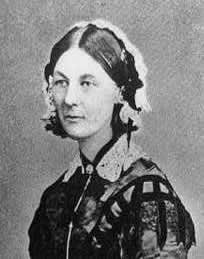 Florence Nightingale, OM, RRC (1820 –1910) was a celebrated English social reformer and statistician, and the founder of modern nursing.

She came to prominence while serving as a nurse during the Crimean War, where she tended to wounded soldiers.   Nightingale arrived early in November 1854 at Selimiye Barracks in Scutari (modern-day Üsküdar in Istanbul). Her team found that poor care for wounded soldiers was being delivered by overworked medical staff in the face of official indifference. Medicines were in short supply, hygiene was being neglected, and mass infections were common, many of them fatal. There was no equipment to process food for the patients.  She worked tirelessly to improve the situation.  After Nightingale sent a plea to The Times for a government solution to the poor condition of the facilities, the British Government commissioned Isambard Kingdom Brunel to design a prefabricated hospital which could be built in England and shipped to the Dardanelles. The result was Renkioi Hospital, a civilian facility, which under the management of Dr. Edmund Alexander Parkes had a death rate less than 1/10th that of Scutari.

In 1860, Nightingale laid the foundation of professional nursing with the establishment of her nursing school at St Thomas' Hospital in London. It was the first secular nursing school in the world. The first trained Nightingale nurses began work on 16 May 1865 at the Liverpool Workhouse Infirmary. Now called the Florence Nightingale School of Nursing and Midwifery, the school is part of King's College London. She also campaigned and raised funds for the Royal Buckinghamshire Hospital in Aylesbury near her family home.  Florence Nightingale's lasting contribution has been her role in founding the modern nursing profession. She set an example of compassion, commitment to patient care and diligent and thoughtful hospital administration.

Nightingale's ability to effect reform rested on her exceptional analytic skills, her high reputation, and her network of influential friends.  Her social reforms include improving healthcare for all sections of British society; improving healthcare and advocating for better hunger relief in India; helping to abolish laws regulating prostitution that were overly harsh to women; and expanding the acceptable forms of female participation in the workforce.

Nightingale was also a prodigious and versatile writer. In her lifetime much of her published work was concerned with spreading medical knowledge. Nightingale wrote Notes on Nursing (1859) which  served as the cornerstone of the curriculum at the Nightingale School and other nursing schools, though it was written specifically for the education of those nursing at home. Nightingale wrote:

"Every day sanitary knowledge, or the knowledge of nursing, or in other words, of how to put the constitution in such a state as that it will have no disease, or that it can recover from disease, takes a higher place. It is recognised as the knowledge which every one ought to have – distinct from medical knowledge, which only a profession can have".

Notes on Nursing also sold well to the general reading public and is considered a classic introduction to nursing.  In the introduction to the 1974 edition, Joan Quixley of the Nightingale School of Nursing wrote:

"The book was the first of its kind ever to be written. It appeared at a time when the simple rules of health were only beginning to be known, when its topics were of vital importance not only for the well-being and recovery of patients, when hospitals were riddled with infection, when nurses were still mainly regarded as ignorant, uneducated persons. The book has, inevitably, its place in the history of nursing, for it was written by the founder of modern nursing".

Nightingale was born to a wealthy upper-class family, at a time when women of her class were expected to focus on marriage and child bearing. She was a deeply spiritual person.  Nightingale underwent the first of several spiritual experiences  in February 1837 resulting in her devoting her life to the service of others. She had yet more experiences when travelling in Egypt, all of them reinforcing her understanding of her destiny.  She even rejected proposals of marriage so as to be free to pursue her calling. She was lucky in having a father who supported her.

Nightingale's achievements are all the more impressive when they are considered against the background of social restraints on women in Victorian England. Her father, William Edward Nightingale, was an extremely wealthy landowner, and the family moved in the highest circles of English society. In those days, women of Nightingale's class did not attend universities and did not pursue professional careers; their purpose in life was to marry and bear children. Nightingale was fortunate. Her father believed women should be educated, and he personally taught her Italian, Latin, Greek, philosophy, history and - most unusual of all for women of the time - writing and mathematics.

Nightingale was not that enamoured of religion.   Despite being classified  as a Unitarian in several older sources, Nightingale's own rare references to conventional Unitarianism are negative. Nightingale felt that genuinely spiritual people lived their beliefs and showed active care and love for others. The theological inventions of heaven and hell appalled her.  Ultimately she did not believe in the 'heaven' and hell of religions and instead saw a spiritual world to which all had access on death.   She would sometimes comfort those in her care with this view. For example, a dying young prostitute being tended by Nightingale was concerned she was going to hell and said to her 'Pray God, that you may never be in the despair I am in at this time'. The nurse replied " the real God is far more merciful than any human creature ever was or can ever imagine."

She also believed other belief systems, particularly eastern religions, contained 'genuine revelation'. She was a strong opponent of discrimination of any kind whether religious or racial.  She was often deeply critical of organised religion. She disliked the role the 19th century Church of England would sometimes play in worsening the oppression of the poor.  She also fought for her hospitals to remain secular .  She saw that  many religiously motivated health workers were concerned chiefly in securing their own 'salvation' [whatever that means!], and that this motivation was inferior to the professional desire to deliver the best possible care.  In effect they were doing it for selfish and hypocritical reasons.

What was her inspiration?  Well her beliefs, but those beliefs were her own.  But she was particularly open to spiritual input as a result of her own poor health.  There is an irony in the fact that she spent her whole life helping others who were ill, but was chronically sick herself.   Starting in her mid thirties, she suffered from chronic poor health, but continued working almost until her death at the age of ninety.  From 1857 onwards, Nightingale was intermittently bedridden and suffered from depression.  She was yet another person who was an extensive user of laudunum.

“Most authorities today accept that Nightingale suffered from a particularly extreme form of brucellosis, the effects of which only began to lift in the early 1880s. Despite her symptoms, she remained phenomenally productive in social reform. During her bedridden years, she also did pioneering work in the field of hospital planning, and her work propagated quickly across Britain and the world. Nightingale output slowed down considerably in her last decade, she now wrote very little due to blindness and declining mental abilities, though she still retained an interest in current affairs”.