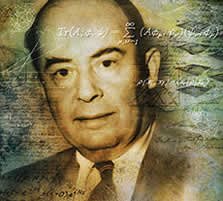 Hans Bethe stated "I have sometimes wondered whether a brain like von Neumann's does not indicate a species superior to that of man".  And indeed looking at von Neumann’s life, it seems clear he was one of those with the right genes.

Von Neumann wrote 150 published papers in his life; 60 in pure mathematics, 20 in physics, and 60 in applied mathematics. His last work, an unfinished manuscript written while in the hospital and later published in book form as The Computer and the Brain,  gives an indication of the direction of his interests at the time of his death.

Von Neumann was born in Budapest to wealthy Jewish parents.  He was a child prodigy in the areas of language, memorization, and mathematics. As a 6 year old, he could divide two 8-digit numbers in his head  By the age of 8, he was familiar with differential and integral calculus.

At the age of 15, he began to study advanced calculus.   By the age of 19, von Neumann had published two major mathematical papers, the second of which gave the modern definition of ordinal numbers.  He received his Ph.D. in mathematics  from Pázmány Péter University in Budapest at the age of 22.  By the end of 1927, von Neumann had published twelve major papers in mathematics, and by the end of 1929, thirty-two papers, at a rate of nearly one major paper per month.

Von Neumann's powers of speedy, massive memorization and recall allowed him to recite volumes of information, and even entire directories, with ease. He thus had the gift of perfect recall or perception recall.

In 1930, von Neumann was invited to Princeton University, New Jersey, and, subsequently, was one of the first four people selected for the faculty of the Institute for Advanced Study (two of the others being Albert Einstein and Kurt Gödel), where he remained a mathematics professor from its formation in 1933, until his death. 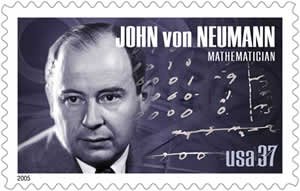 Set theory is based on classes – Intelligences – with attributes which define that class.  Attributes provide a means of recording state and are thus also a record of the functions of the class.  Classes can have sub-types.  So although we hear little of von Neumann having any visions – he received a very large amount of invisible input - wisdom.

It may not be immediately obvious but von Neumann’s lattice theory also covers something of the complexities of the Matrix.

"Dimension is determined, up to a positive linear transformation, by the following two properties. It is conserved by perspective mappings ("perspectivities") and ordered by inclusion. The deepest part of the proof concerns the equivalence of perspectivity with "projectivity by decomposition"—of which a corollary is the transitivity of perspectivity."

And  "[I]n the general case, von Neumann proved the following basic representation theorem. Any complemented modular lattice L having a "basis" of n;4 pairwise perspective elements, is isomorphic with the lattice (R) of all principal right-ideals of a suitable regular ring R. This conclusion is the culmination of 140 pages of brilliant and incisive algebra involving entirely novel axioms. Anyone wishing to get an unforgettable impression of the razor edge of von Neumann's mind, need merely try to pursue this chain of exact reasoning for himself—realizing that often five pages of it were written down before breakfast, seated at a living room writing-table in a bathrobe."

After having completed the axiomatization of set theory, von Neumann began to confront the axiomatization of quantum mechanics. This theory is connected with the aspects of the levels and layers.  He stated that a quantum system could be considered as a point in a so-called Hilbert space, which has infinitely many dimensions corresponding to the infinitely many possible states of the system – vibrational levels.  The physics of quantum mechanics was reduced to the mathematics of the linear Hermitian operators on Hilbert spaces.

For example, the uncertainty principle, according to which the determination of the position of a particle prevents the determination of its momentum and vice versa, is translated into the non-commutativity of the two corresponding operators. This new mathematical formulation included as special cases the formulations of both Heisenberg and Schrödinger, and culminated in his 1932 book Mathematische Grundlagen der Quantenmechanik.

Neumann's proof inaugurated a line of research that ultimately led, through the work of J S Bellin 1964 to Bell's theorem, and the experiments of Alain Aspect in 1982, to the demonstration that quantum physics requires a notion of reality substantially different from that of classical physics - spirit.

In a chapter of The Mathematical Foundations of Quantum Mechanics, von Neumann deeply analyzed the so-called measurement problem. He concluded that the entire physical universe could be made subject to the universal wave function - energy. Since something "outside the calculation" was needed to collapse the wave function, von Neumann concluded that the collapse was caused by the consciousness of the experimenter.  This you will need to think about.

Von Neumann founded the field of game theory as a mathematical discipline. Von Neumann proved his minimax theorem in 1928. This theorem establishes that in zero-sum games with perfect information (i.e., in which players know at each time all moves that have taken place so far), there exists a pair of strategies for both players that allows each to minimize his maximum losses (hence the name minimax). When examining every possible strategy, a player must consider all the possible responses of his adversary. The player then plays out the strategy which will result in the minimization of his maximum loss.  This has relevance to the Great work and prophecy.

In his 1944 Theory of Games and Economic Behavior (written with Oskar Morgenstern), von Neumann declared that one needed to use functional analysis methods, especially convex sets – function dependencies.

Von Neumann was also the inventor of the method of proof, used in game theory, known as backward induction – cause effect diagram analysis.

John von Neumann also consulted for the ENIAC project, when ENIAC was being modified to contain a stored program. One could argue that ENIAC was the first computer to use a stored program. John von Neumann also designed the instruction set for the modified ENIAC, so he was also inspired by the Word.   This architecture is to this day the basis of modern computer design, unlike the earliest computers that were 'programmed' by altering the electronic circuitry.

Von Neumann's team performed the world's first numerical weather forecasts on the ENIAC computer; von Neumann published the paper Numerical Integration of the Barotropic Vorticity Equation in 1950. So simulation – the basis of prophecy

He wasn’t a very good driver.  When Cuthbert Hurd hired him as a consultant to IBM, Hurd often quietly paid the fines for his traffic tickets. He believed that much of his mathematical thought occurred intuitively, and he would often go to sleep with a problem unsolved, and know the answer immediately upon waking up.  Alternatively he might drift off when driving.

In 1955, von Neumann was diagnosed with what was either bone or pancreatic cancer.   A von Neumann biographer, Norman Macrae, has speculated: "It is plausible that in 1955 the then-fifty-one-year-old Johnny's cancer sprang from his attendance at the 1946 Bikini nuclear tests."  His involvement in the nuclear programme was perhaps the only black spot in a life of light.  So he was hoisted by his own petard.  Neumann died a year and a half later, aged 53, at the Walter Reed Army Medical Center in Washington, D.C.