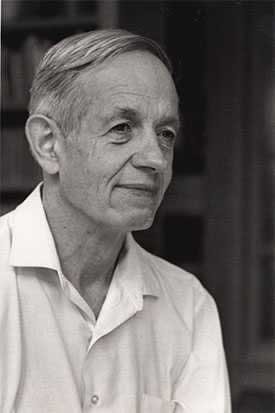 John Forbes Nash, Jr. [June 13, 1928 – May 23, 2015]  is an American mathematician whose works in game theory, differential geometry, and partial differential equations have provided insight into the forces that govern chance and events inside complex systems in daily life. His theories are used in market economics, computing, evolutionary biology, artificial intelligence, accounting, politics and military theory.

Serving as a Senior Research Mathematician at Princeton University during the latter part of his life, he shared the 1994 Nobel Memorial Prize in Economic Sciences with game theorists Reinhard Selten and John Harsanyi. Nash was also awarded the John von Neumann Theory Prize for his discovery of non-cooperative equilibria and he won the Leroy P. Steele Prize in 1999.

He attended the Carnegie Institute of Technology (now Carnegie Mellon University) and graduating in 1948 with bachelor's and master's degrees in mathematics, he accepted a scholarship to Princeton University where he pursued his graduate studies in Mathematics.

Nash's advisor and former Carnegie Tech professor R.J. Duffin wrote a letter of recommendation consisting of a single sentence: "This man is a genius."

Nash is the subject of the Hollywood movie A Beautiful Mind. The film, loosely based on the biography of the same name, focuses on Nash's mathematical genius and struggle with paranoid schizophrenia.  As early as 1959 [aged 31] Nash’s wife admitted Nash to a mental hospital for schizophrenia, as such schizophrenia has played a large part in Nash’s life and career.

In 1961, Nash was committed to the New Jersey State Hospital at Trenton. Over the next nine years, he spent periods in psychiatric hospitals, where, aside from receiving antipsychotic medications, he was administered insulin shock therapy. Although he sometimes took prescribed medication, Nash later wrote that he only ever did so under pressure. After 1970, he was never committed to the hospital again and he refused any medication. According to Nash, the film A Beautiful Mind inaccurately implied that he was taking the new atypical antipsychotics during this period.  He wasn’t.

What appears to have had most benefit in helping him was the equivalent of a safe house.  Encouraged by his then former wife, Nash started to work and live in a community setting, where his ‘eccentricities’ were accepted. His wife said of Nash, "it's just a question of living a quiet life".

Perhaps of great interest to anyone else with so called ‘psychoses’ is that John does not see a categorical distinction between terms such as schizophrenia and bipolar disorder, all are forms of so called  ‘mental illness’ caused by variations in the brain and its structure which may be completely different in one case as opposed to another and may even be unique.  Thus labels attached to symptoms have little meaning, when the cause is much the same – brain structure differences.

Furthermore there is just the hint that he regards the doctors as none too helpful in their approach.  He was always taken to hospitals against his will, and only temporarily renounced his "dream-like delusional hypotheses" after being in a hospital long enough to decide to superficially conform - to behave apparently or superficially  ‘normal’ or to experience as he put it  "enforced rationality".

By 1995, he was "thinking rationally again in the style that is characteristic of scientists" – so conforming, left brain stuff  – but it was a style he describes as ‘infinitely more limited’.  The muse left.

Nash himself has suggested hypotheses on mental illness. He has emphasised the importance of human diversity and the potential benefits of apparently ‘nonstandard behaviour’.  Or as has been noted elsewhere on this website, science is a realm of ‘clever’ but not very wise men.  Nash was a wise man, but clever men tend not to understand the wise – nor do they much like them – jealousy always creeps in.

But his genius was a function of being on the borderline – teetering figuratively speaking -  between being very mentally ill and losing touch entirely with reality and almost constant inspiration.  An absolute tightrope of balance and one that can tip you either way. Sometimes he did tip the wrong way and he was indeed very ill.  But when the balance was right, he was inspired.

Not only did Nash receive inspiration, but it appears that he had access to the wider spiritual world and the ‘general database of ideas’ that the spiritual world appears to keep – the so called akashic records.  In the book A Beautiful Mind, author Sylvia Nasar explains that Nash was working on proving a theorem involving elliptic partial differential equations when, in 1956, he suffered a severe disappointment when he learned of an Italian mathematician, Ennio de Giorgi,  who had published a proof just months before Nash achieved his proof. Each took different routes to get to their solutions.

It appears to have been extreme stress brought on by unhappiness, work pressure, and his fear that the gift he had would leave him  He has said, "If I felt completely pressureless I don't think I would have gone in this pattern".

On May 23, 2015, Nash and his wife, Alicia de Lardé Nash, while riding in a taxi, were killed in a motor vehicle accident in New Jersey.