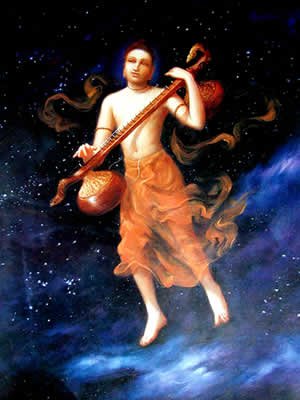 Narada was a sage who plays a prominent role in a number of the Hindu Puranic texts, especially in the Bhagavata Purana, and in the Ramayana.

There is the hint he might have been illegitimate [not that this matters, but for him it probably did] “He was born as the son of a maid-servant of a priest (Brahmin)”. After his mother died, he decided to roam the forest in search of enlightenment.  He then appears to have been a travelling monk with the ability to “visit distant worlds or planets” so have out of body experiences.

He carried a veena [a type of musical instrument] which he used to accompany his singing of hymns, prayers and mantras.  But his principal technique appears to have been a form of love with visualisation, along with chanting and controlled breathing.

Reaching a tranquil forest location, after quenching his thirst from a nearby stream, he sat under a tree in meditation, concentrating on the paramatma form of Vishnu within his heart as he had been taught by the priests he had served. After some time Narada experienced a vision wherein Narayan appeared before him, smiling, and spoke 'that despite having the blessing of seeing him at that very moment, Narada would not be able to see his divine form again until he died' . After instructing Narada in this manner, he then disappeared from his sight. The boy awoke from his meditation both thrilled and disappointed.

Much of what he said was written down for him in the Narada sutras. He was a key source about the gods in the Hindu cosmology.

The Narada Bhakti Sutra is a well known sutra within Hinduism. The text details the process of devotion (Bhakti), or Bhakti yoga and is thus of particular importance to many of the Bhakti movements within Hinduism. It has received particular attention among the Vaishnava traditions.

Sanskrit scriptures often appear in variant editions which may show differences in organization and verse numbering. As organized by Swami Prabhavananda, the text covers the following subjects: