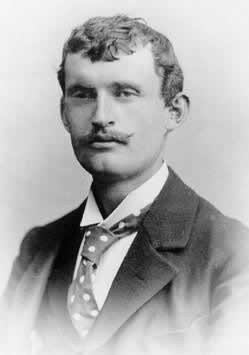 Edvard Munch was a Norwegian artist and one of five children born to Christian Munch, the son of a pastor and his wife Laura. The family moved to Christiania (now Oslo) in 1864. His father’s pay was very low, and they lived in perennial poverty.  They moved frequently from one sordid flat to another.

Edvard's mother died of tuberculosis in 1868, as did Munch's favorite sister Johanne Sophie in 1877. After their mother's death, the Munch siblings were raised by their father and an aunt. Edvard was often ill for many of the winters and was kept out of school.

His father is described as exhibiting ‘morbid pietism’. Munch wrote, "My father was temperamentally nervous and obsessively religious—to the point of psychoneurosis. From him I inherited the seeds of madness. The angels of fear, sorrow, and death have stood by my side since the day I was born."

His father reprimanded his children by telling them that their mother was looking down from heaven and grieving over their misbehavior.  Cruel.  HURT.  Imposed demons. 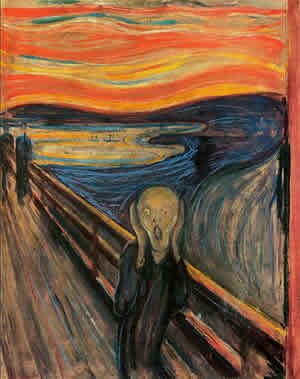 Angst of a terrible kind.

The oppressive religious milieu, plus Edvard's poor health and the vivid ghost stories, helped inspire macabre visions and nightmares in Edvard, who felt death constantly advancing on him. One of Munch's younger sisters was diagnosed with mental illness at an early age. Munch would later write, "I inherited two of mankind's most frightful enemies—the heritage of consumption and insanity."

There has been speculation that Munch was also gay, which given his father's preoccupations would not have helped his peace of mind at all.  In fact, Munch's state could have been because he was gay or because he was suffering from Repression.

In 1899, at the age of thirty-four, Munch began a relationship with Tulla Larsen, a "liberated" upper-class woman. Larsen was eager for marriage, and Munch begged off. He wrote, "Ever since he was a child he had hated marriage." So the answer to the question 'was he gay?', is that we don’t know, but this points far more to repression.  Munch fled from Tulla in 1900, also turning away from her considerable fortune, and moved to Berlin.

His paintings may tell us more.  Below I want you to compare Munch’s painting ‘the Madonna’ with a painting by Sir Edward Poynter.  Which of the two do you think liked women, had seen a woman naked and was sympathetically disposed towards women? 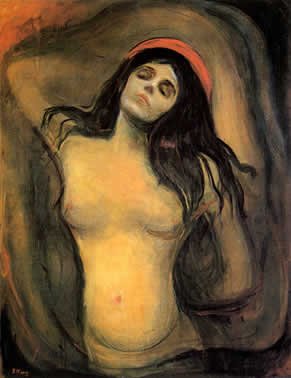 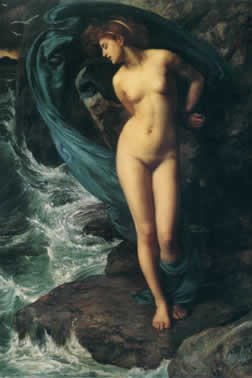 The Guardian Dec 2012
Munch never spared himself when it came to painting. He showed himself drunk, sick, taking aim at a rival with a gun through a window. In his 60s, he suffered a haemorrhage in his right eye and embarked on a series of paintings about his damaged retina, or of what it looked like from the inside: abstract images, like solar flares; portraits of friends and lovers obscured by spots and phantoms.  Munch's eyesight improved, and he continued to work until his death at the age of 80. A final self-portrait showed the elderly artist standing between a grandfather clock and a bed, two harbingers of the end, his suit loose on his shrinking frame, his features barely there. The canvas is crammed with details – the paintings in the room behind him, the patterned bedspread – but as a portrait it is almost unbearably naked: the artist's hands hang loose and unoccupied. He knows his number's up.