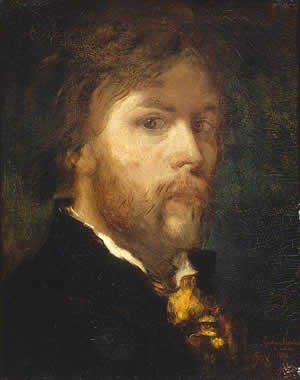 Gustave Moreau (1826 –1898) was a French painter, who had a considerable influence on many other painters as well as being a prolific artist himself.  During his lifetime, Moreau produced more than 8,000 paintings, watercolours and drawings, many of which are on display in Paris' Musée national Gustave Moreau.

Moreau became a professor at Paris' École des Beaux-Arts in 1891 and among his many students were the fauvist painters, Henri Matisse and Georges Rouault. Jules Flandrin, Theodor Pallady and Léon Printemps also studied with Moreau.  His first paintings had religious themes, but as time went on his paintings became more mythological and symbolic in content.

Gustave Moreau was born on April 6, 1826 in Paris.  His father was an architect determined to instill a ‘solid classical education’ in the boy, his mother Pauline was a caring soul whose main concern was how frail her son was.  By age 10, Gustave was studying at the College Rollin, but the death of his 13 year old sister Camille plunged him into despair and he was removed from school because of his health. From that point on he was coached by his father, his main consolation being drawing, a pastime he had started around the age of eight.

From that point on his destiny as an artist was determined.  He produced his first album of drawings during a trip to Northern Italy and in 1844 attended the private studio of the painter François -Édouard Picot, a neoclassical decorator of Parisian public monuments and churches.  In 1846, Gustave Moreau was admitted to the Royal Academy of Fine Arts, but in 1849, he left the school after his second rejection at the Prix de Rome.

And here we can pause, because Moreau’s work is the majority of the time dark, appallingly gloomy and very classical in content.  He is called a Symbolist, but only occasionally does he really rise to symbolism in its true sense.  His dark somber paintings can be full of violence and express the mind of a very depressed man ridden with angst.  And then, suddenly we come across paintings that are beautiful, light, technically good but also inspirationally good too with far more true Symbolic meaning.

One might be tempted to think Gustave Moreau was perhaps a manic depressive, but though ill a great deal, it was his life that went from highs to lows.  There has been a great deal of discussion about whether Gustave Moreau was homosexual.  One argument has been that he included a great many androgynous subjects in his paintings.  But that argument simply shows an ignorance of Symbolism.  To me the argument for his homosexuality was simply the way he painted and drew men.  What comes across very forcibly is how attracted he was to them, how much effort he put into making them beautiful.  The men in his paintings are nearly all nude, nearly all beautiful [rather than handsome] and are always the centre subject matter of the painting.  Like Lord Leighton, he liked men.  We can leave it there.  It makes his life that much more tragic for reasons that will be clear in a moment. 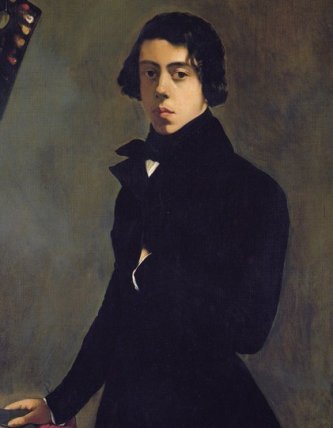 In 1851, Moreau befriended Theodore Chassériau, a former student of Ingres, and he rented a nearby workshop in Frochot Avenue, near the Place Pigalle. The influence Chassériau had on  Moreau became crucial.  In 1852, Moreau was admitted for the first time at the official Salon in Paris. His parents then bought him a house at 14 rue de La Rochefoucauld, with an artist's studio housed on the third floor.  Moreau’s paintings are lifted above gloom and become light and almost cheerful.

Moreau bereft, sank into gloom, his paintings plunged into darkness.  From 1857-1858, he travelled in Italy in a whirlwind of places, copying the old masters - Michelangelo, Veronese, Raphael, Correggio.  He went to Rome, Florence, Milan, Venice, and then Naples where his parents came to join him. 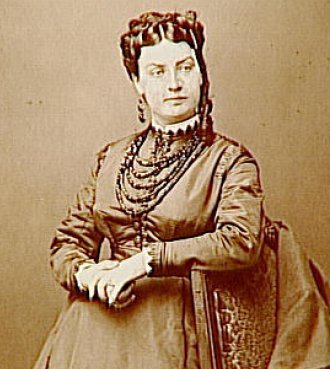 And then on returning to Paris in September 1859, he met a lady called Alexandrine Dureux, who became and remained his ‘best and only friend’ until her death in 1890.  She encouraged him to stop copying and to start drawing again.  There is never any indication in any of the description of their friendship that it was ever anything other than this – a friendship, but love is love and Moreau was for a while inspired by it.

And then another abyss.  In February 1862, his father died.

It is at this strange point in his life, where he has lost his sister, his father and Theodore Chassériau, but gained the support and friendship of Alexandrine, that Moreau paints perhaps one of his best known works.  In 1864, Moreau exhibited Oedipus and the Sphinx at the Paris Salon, it was acquired by Prince Napoleon.  The symbolism is extraordinarily well developed in the painting, but it is a very interesting exploration, given his circumstances.

Moreau continued to produce some very interesting paintings symbolically after this.  For example, he exhibited Prometheus and The Rape of Europa in the Paris Salon in 1865. He received a medal, but was so severely treated by the critics, that he did not exhibit again until 1876.  Many of his paintings of these years are dark paintings, paintings like Salome dancing, Hercules and the Hydra, and the watercolor The Apparition show him to be in a very fragile state.

In 1879, however, Moreau began an exceptional series of sixty-four watercolours to illustrate the Fables of La Fontaine, whose sketches are preserved in the Musée Gustave Moreau. These are lighter and somehow an indication that he was pulling himself out of the gloom into a better place.

And then the abyss struck again.  In 1884, the death of his mother plunged him into deep despair.  Moreau continued to paint.  He exhibited, for example, at the Goupil Gallery - the only solo exhibition he had.  In 1888, he was elected to the Academy of Fine Arts and later in 1892, he succeeded Delaunay as professor at the Ecole des Beaux- Arts.  But Moreau never really managed to lift himself up above the abyss again.  In 1890, his friend Alexandrine Dureux died and deeply troubled, he painted Orpheus at the Tomb of Eurydice in her memory.

In 1895, Moreau set about transforming the family home at 14 rue de La Rochefoucauld into a museum that could be used to exhibit his works after his death.  Moreau died on April 18th 1898 aged 72. He is buried in Montmartre cemetery. 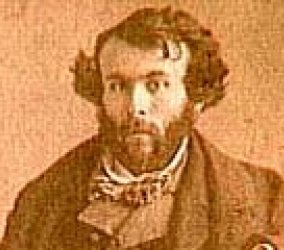 As a purely speculative aside, I think Moreau was left handed.  Left handed people paint things by preference on the left of the canvas, and his self portrait along with a number of his paintings have people on the left facing to the right.  If you are painting your own self portrait with a mirror [as he would have done] it is also marginally easier to have the mirror on your left, the same side as the drawing hand then there is not so much need to turn from canvas to mirror as you paint.  This also produces a portrait with you facing to the right, the left side of your face appears to be the right side of your face in the portrait.