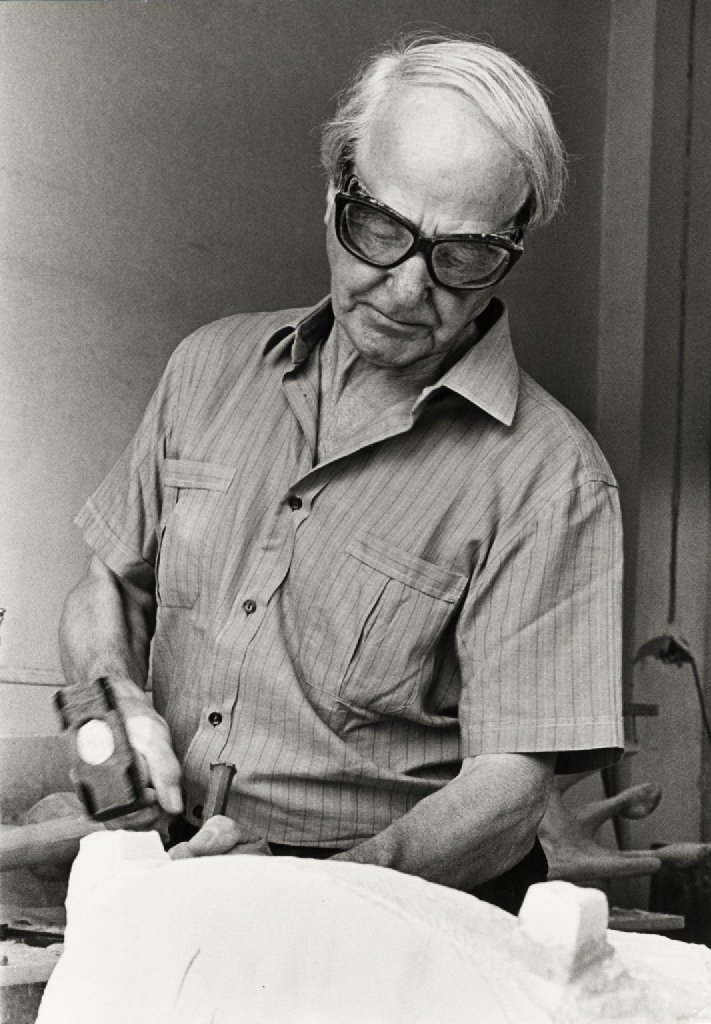 He was best known for his semi-abstract monumental sculptures in stone and bronze, many of which are now located around the world as public works of art.

Moore was born in Castleford, Yorkshire in the UK, the son of a coal miner.

His ability in later life to fulfill large-scale commissions made him exceptionally wealthy, and well known, but he was uninterested in money, he lived frugally and most of the money he earned went towards endowing the Henry Moore Foundation, which continues to support education and promotion of the arts.

An important key t the understanding of Moore's work is the understanding of the symbolism of stone and metals.  Jacquetta Hawkes and Henry Moore were friends.  Moore illustrated her book The Land, so she seems an appropriate person to explain something of the process of creation when you are spiritually aware, as he was.

You will notice that he was left handed. 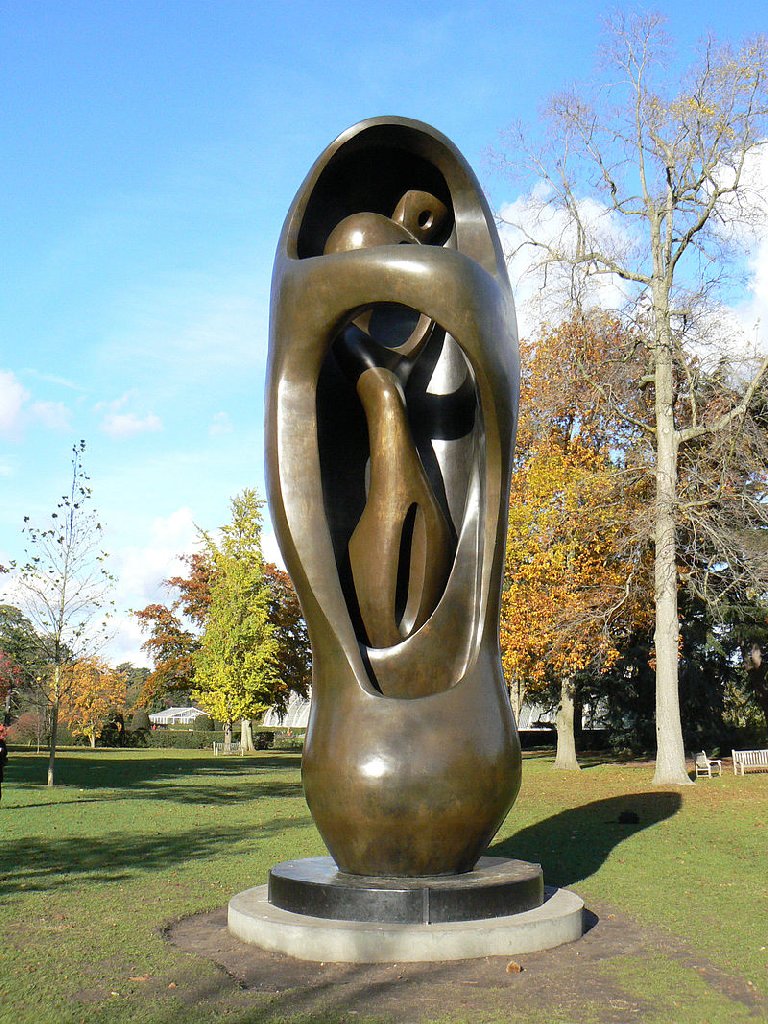 It is 'part of the wisdom of our greatest sculptor, Henry Moore, to have returned to English stones [as raw material] and used them with a subtle sensitiveness for their personal qualities.

He may have inherited something from his father who, as a miner spending his working life in the Carboniferous horizons of Yorkshire, must have had a direct understanding not only of coal but of the sandstones and shales in which it lies buried and on which the life of the miner depends.

Henry Moore has himself made studies of miners at work showing their bodies very intimate with the rock yet charged with a life that separates them from it. …

[He] uses his understanding of the personality of stones in his sculpture, allowing their individual qualities to contribute to his conception. Indeed, he may for a moment be regarded in the passive role of a sympathetic agent giving expression to the stone, to the silting of ocean beds, down in those fine bands that curve with the sculpture's curves, and to the quality of the life that shows itself in the delicate markings made by shells, corals and sea-lilies. 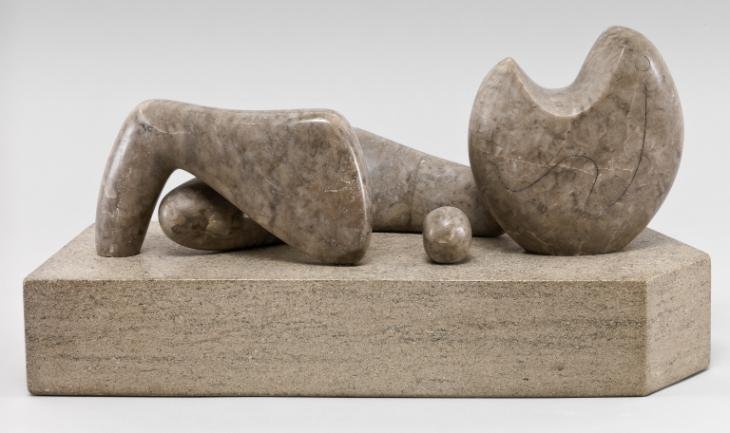 It would certainly be inappropriate to his time if Moore habitually used the Italian marbles so much in favour since the Renaissance. For this fashion shows how man in his greatest pride of conscious isolation wanted stone which was no more than a beautiful material for his mastery. 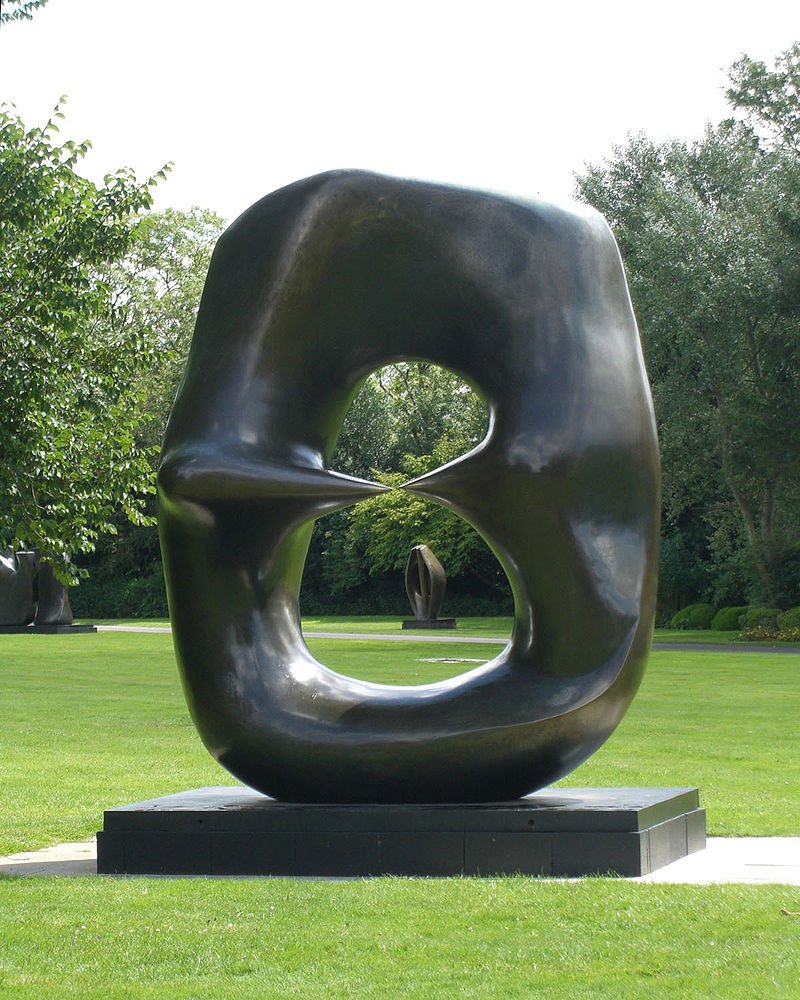 Now when our minds are recalling the past and our own origins deep within it, Moore reflects a greater humility in avoiding the white silence of marble and allowing his stone to speak.

That is why he has often chosen a stone like Hornton, a rock from the Lias that is full of fossils all of which make their statement when exposed by his chisel.

Sometimes the stone may be so assertive of its own qualities that he has to battle with it, strive against the hardness of its shells and the softness of adjacent pockets to make them, not efface themselves, but conform to his idea, his sense of a force thrusting from within, which must be expressed by taut lines without weakness of surface. 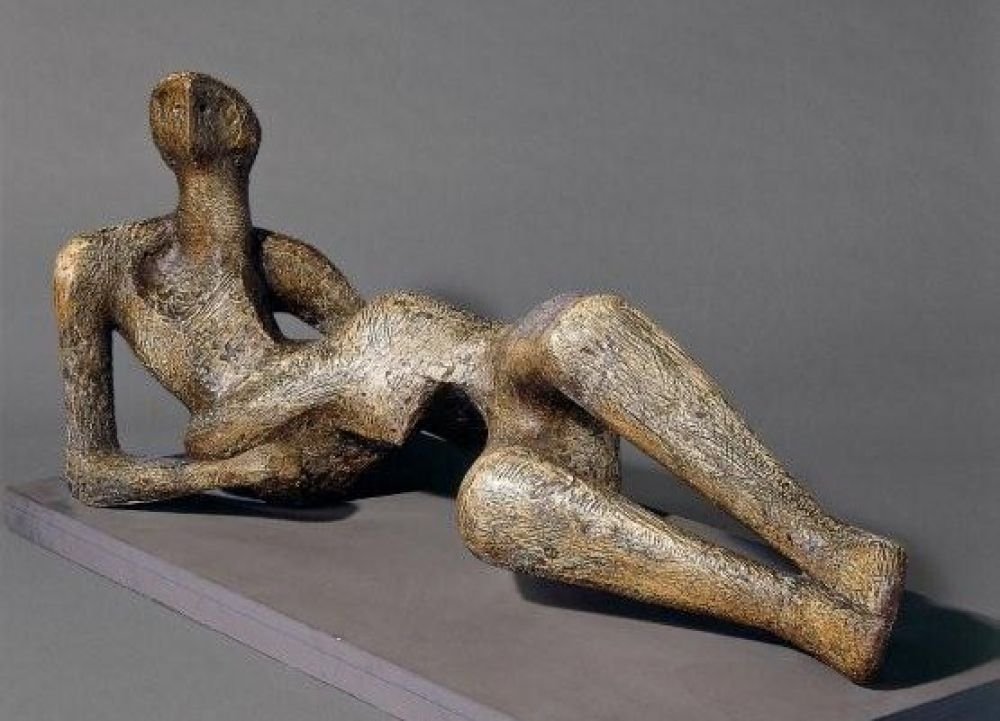 Moore uses Hornton stone also because it has two colours, a very pale brown and a green with deeper tones in it. The first serves him when he is conscious of his subject as a light one, the green when it must have darkness in it. 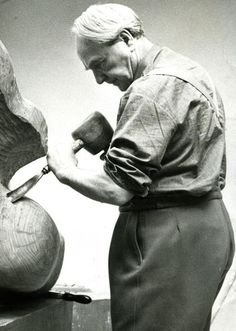 Differences in climate round the shores of the Liassic lakes probably caused the change in colour of Hornton stone, and so past climates are reflected in the feeling of these sculptures. As for the sculptor's sense of Light or Darkness inherent in his subjects, it is my belief that it derives in large part from the perpetual experience of Day and Night to which all consciousness has been subject since its beginnings.

The sense of Light and Darkness seems to go to the depths of man's mind, and whether it is applied to morality, to aesthetics or to that more general conception-the light of intellectual processes in contrast with the darkness of the subconscious-its symbolism surely draws from our constant swing below the cone of night.

It is hardly possible to express in prose the extraordinary awareness of the unity of past and present, of mind and matter, of man and man's origin which these thoughts bring to me. 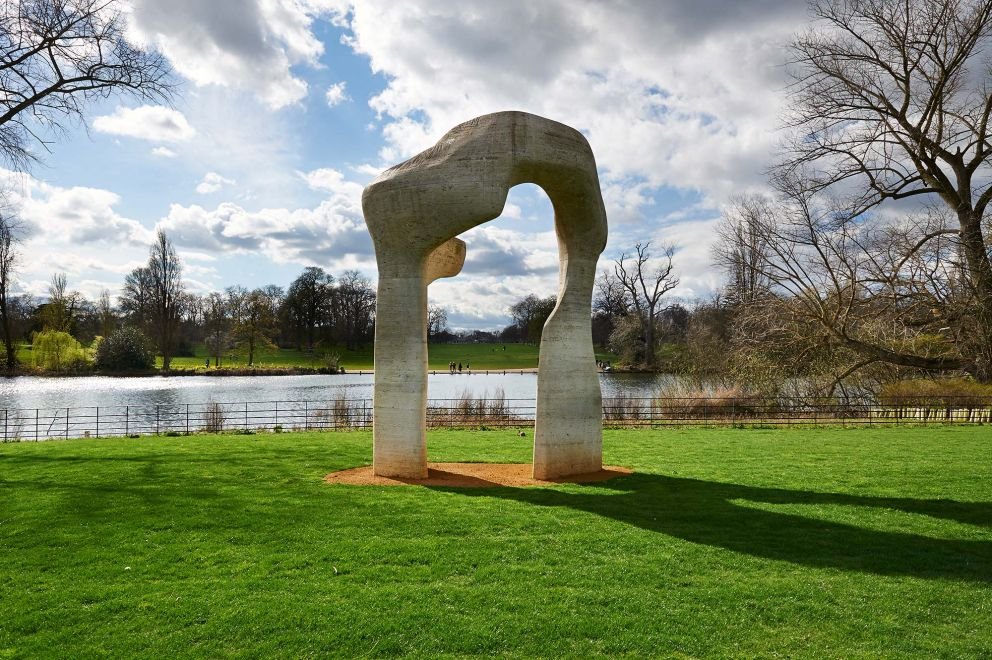 Once when I was in Moore's studio and saw one of his reclining figures with the shaft of a belemnite exposed in the thigh, my vision of this unity was overwhelming. I felt that the squid in which life had created that shape, even while it still swam in distant seas was involved in this encounter with the sculptor; that it lay hardening in the mud until the time when consciousness was ready to find it out and imagination to incorporate it in a new form.

So a poet will sometimes take fragments and echoes from other earlier poets to sink them in his own poems where they will enrich the new work as these fossil outlines of former lives enrich the sculptor's work.

Rodin pursued the idea of conscious, spiritual man emerging from the rock; Moore sees him rather as always a part of it. Through his visual similes he identifies women with caverns, caverns with eye-sockets; shells, bones, cell plasm drift into human form. Surely Mary Anning might have found one of his forms in the Blue Lias of Lyme Regis?

That indeed would be fitting, for I have said that the Blue Lias is like the smoke of memory, of the subconscious, and Moore's creations float in those depths, where images melt into one another, the direct source of poetry, and the distant source of nourishment for the conscious intellect with its clear and fixed forms. I can see his rounded shapes like whales, his angular shapes like ichthyosaurs, surfacing for a moment into that world of intellectual clarity, but plunging down again to the sea bottom, the sea bottom where the rocks are silently forming. 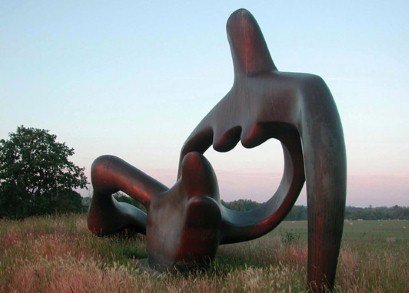 We are the hollow men
We are the stuffed men
Leaning together
Headpiece filled with straw. Alas!
Our dried voices, when
We whisper together
Are quiet and meaningless
As wind in dry grass
Or rats' feet over broken glass
In our dry cellar

Those who have crossed
With direct eyes, to death's other Kingdom
Remember us—if at all—not as lost
Violent souls, but only
As the hollow men
The stuffed men.