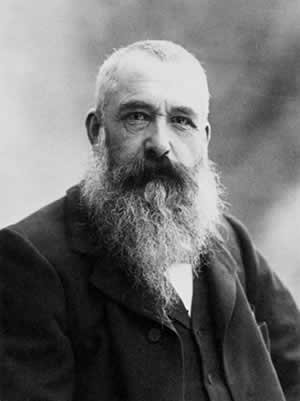 Claude Monet (1840 –1926) was a founder of French impressionist painting, and the most consistent and prolific practitioner of the movement's philosophy of expressing one's perceptions before nature, especially as applied to plein-air landscape painting. The term Impressionism is derived from the title of his painting Impression, Sunrise (Impression, soleil levant).

Impressionism does not seek to be a symbolist movement as well.  If there is any symbolism it is probably accidental.  Impressionism was intended to be a movement which captured the effects of Pure perception. As a consequence you can get two kinds of Impressionistic movements which derive from this one main theme

Monet was a transfigurer, a painter who tried to capture the effects of light and the enhanced colours you obtain in this spiritual state.

Monet was naturally gifted as a painter and probably saw things in this way anyway, but his true genius started to mature as a result of a whole host of other odd factors – many of which were damaging his health, his eyesight and his body.

He smoked heavily, he drank absinthe but perhaps more importantly he used lead and other heavy metal based paints and all the bright colours that can give you lead and heavy metal poisoning.

Claude Monet was born in Paris.  But in 1845, his family moved to Le Havre in Normandy.

On the beaches of Normandy in about 1856/1857, he met fellow artist Eugène Boudin, who became his mentor and taught him to use oil paints. Boudin also taught Monet "en plein air" techniques.

On 28 January 1857, his mother died. At the age of sixteen, he left school and went to live with his widowed childless aunt, in Paris, there he became friends with fellow impressionists; among them was Édouard Manet.  In June 1861, Monet joined the First Regiment of African Light Cavalry in Algeria for a seven-year commitment, but, two years later, after he had contracted typhoid fever, his aunt intervened to get him out of the army if he agreed to complete an art course at an art school. 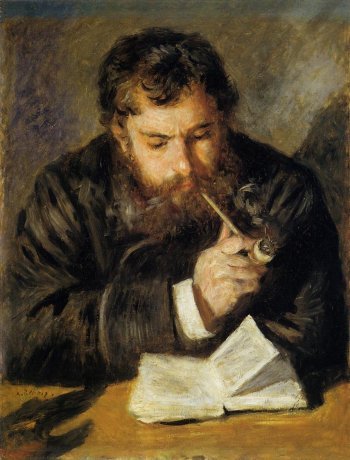 A portrait of Monet by Renoir.

In 1862 Monet became a student of Charles Gleyre in Paris, where he met Pierre-Auguste Renoir, Frédéric Bazille and Alfred Sisley. Together they shared new approaches to art, painting the effects of light with broken colour and rapid brushstrokes, in what later came to be known as Impressionism.

Monet's Camille or The Woman in the Green Dress (La femme à la robe verte), painted in 1866, brought him recognition and was one of many works featuring his future wife, Camille Doncieux; she was the model for the figures in Women in the Garden of the following year, as well as for On the Bank of the Seine, Bennecourt, 1868. Camille became pregnant and gave birth to their first child, Jean in 1867.

Monet and Camille married just before the outbreak of the Franco-Prussian War (19 July 1870),  and they took refuge in England.  His paintings depict the English smoggy atmosphere of the time and the influence of such fellow painters as Turner.

In May 1871, he left London to live in Zaandam, in the Netherlands. In October or November 1871, he returned to France. Monet lived from December 1871 to 1878 at Argenteuil, a village on the right bank of the Seine river near Paris, and a popular Sunday-outing destination for Parisians, where he painted some of his best known works.

Camille became ill in 1876. They had a second son, Michel, on 17 March 1878. This second child weakened her already fading health. In that same year, Monet moved to the village of Vétheuil. On 5 September 1879, Camille Monet died of tuberculosis at the age of thirty-two; Monet painted her on her death bed.

After several difficult months following the death of Camille in September, 1879, a grief-stricken Monet began in earnest to create some of his best paintings of the 19th century. During the early 1880s, Monet painted several groups of landscapes and seascapes in what he considered to be campaigns to document the French countryside. His extensive campaigns evolved into his series' paintings.  So as we can see grief also fuelled his inspiration.

The Monets had temporarily moved into the home of Ernest Hoschedé, in 1878, a wealthy department store owner and patron of the arts.  Hoschedé became bankrupt and left in 1878 and after the death of Camille Monet, Alice Hoschedé helped Monet to raise his two sons, Jean and Michel, by initially taking them to Paris to live alongside her own six children. Alice and all the children subsequently left Paris and rejoined Monet still living in the house in Vétheuil. 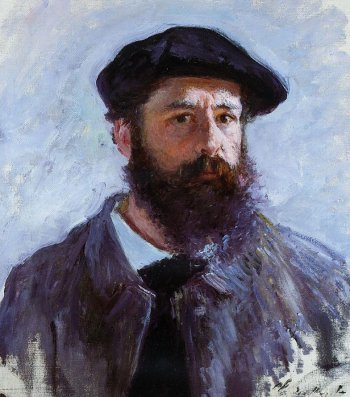 At the beginning of May 1883, they all moved to a house in Giverny in Normandy.  The house was rented but had a barn that doubled as a painting studio, orchards and a small garden. The house was close enough to the local schools for the children to attend and the surrounding landscape offered many suitable motifs for Monet's work. The family worked and built up the gardens. There Monet painted for much of the rest of his life. Following the death of her estranged husband, Alice Hoschedé married Claude Monet in 1892.

By November 1890, Monet was prosperous enough to buy the house, the surrounding buildings and the land for his gardens. During the 1890s, Monet built a greenhouse and a second studio, a spacious building well lit with skylights. Beginning in the 1880s and 1890s through the end of his life in 1926, Monet worked on "series" paintings, in which a subject was depicted in varying light and weather conditions. His first series exhibited was of Haystacks, painted from different points of view and at different times of the day.  He later produced several series of paintings including:  the Water Lilies that were painted on his property at Giverny.

Alice died in 1911 and his oldest son Jean, who had married Alice's daughter Blanche, died in 1914. After Alice died, Blanche looked after and cared for Monet. It was during this time that Monet began to develop the first signs of cataracts.   In 1923, he underwent two operations to remove his cataracts: the paintings done while the cataracts affected his vision have a general reddish tone, which is characteristic of the vision of cataract victims. After his operations he even repainted some of these paintings, with bluer water lilies than before.

Monet died of lung cancer on 5 December 1926 at the age of 86 and is buried in the Giverny church cemetery. Monet had insisted that the occasion be simple; thus only about fifty people attended the ceremony.

His home, garden and waterlily pond were bequeathed by his son Michel, his only heir, to the French Academy of Fine Arts (part of the Institut de France) in 1966. Through the Fondation Claude Monet, the house and gardens were opened for visits in 1980, following restoration. In addition to the  objects of his life, the house contains his collection of Japanese woodcut prints.

There is a very good and comprehensive gallery of Monet's works on Wikipaintings - follow the LINK.  It includes over 1300 of his works.  In choosing the paintings that follow I have kept the selection small, but tried to pick examples that spanned his career, as well as some which very clearly show the effects of pure or enhanced perception.