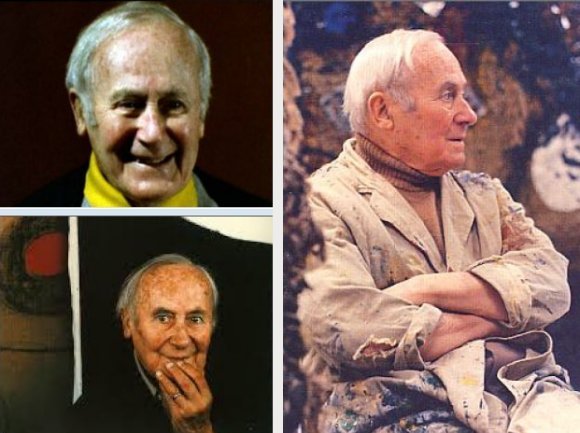 Joan Miró i Ferrà (20 April 1893– 25 December 1983) was a Catalan Spanish painter, sculptor, and ceramicist born in Barcelona. A museum dedicated to his work, the Fundació Joan Miró, was established in his native city of Barcelona in 1975, and another, the Fundació Pilar i Joan Miró, was established in his adoptive city of Palma de Mallorca in 1981.

It appears that art historians do not know how to classify Miro.  He has been called a Symbolist and a Surrealist, neither of which would be totally accurate, because what he devised was unique to him.  In order to understand Miro one has to trace the history of recording spiritual truths in art and poetry.

From the moment the institutionalised church replaced spirituality with power politics, art and poetry have been the two mediums by which spiritual truths have been preserved.  Other mechanisms were Circus, Pantomine, plays and theatre and of course the Tarot.

In painting, initially the symbols and truths were simply portrayed in mythological and realistic paintings, with the symbols part of a realistic looking scene.  John William Waterhouse was a master at this, but he was not alone.  Then paintings became a little less realistic and we have a split.  The Impressionists and painters like Segantini wanted to paint the effects of being spiritually inspired and the Light.  The companion movement sought to take a vast swathe of symbols and simply produce a painting that included them in a thought provoking preferably semi-real way – this was the Surrealists.  Both movements kept symbolism and the spiritual going and in people’s minds.

Then we have Matisse and Malevich, both of whom were symbolists but whose cut-outs and shapes represented the culmination in symbolism, for all you had was the symbol.  The symbol was always in the painting, but it was at its most simple.  A sort of artistic compendium of symbols with a picture to represent the symbol. 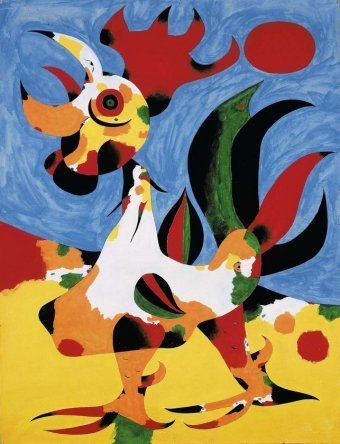 Joan Miro in some senses also took symbolism to its final representation.  The paintings he did are memorable marvelous compositions, abstracts that are very carefully designed and constructed, inspired compositions, colourful, instantly recognisable, but you can look in vain within them for any symbol.  It isn’t there and it was never meant to be.  The paintings are abstracts designed to please the senses, arrest the eye – a sort of poetry in paint, but there is no symbol in them, unless you count the occasional very obvious phallic ones.

No, the symbol was in the title.  Occasionally only one symbol, at other times a whole range of symbols which had no connection.  Miro, like Dali and Magritte had an almost childish [in a nice way] sense of humour.  He was playing games with people, having fun.  Why else would he call a painting “The Lark's Wing, Encircled with Golden Blue, Rejoins the Heart of the Poppy Sleeping on a Diamond-Studded Meadow”.

I could have included every one of his paintings, as each one contains a title with a symbol in them, but there is no point.  Instead I have provided an interesting selection, some of which cover the Tarot cards, of which he seemed to be particularly keen and also knowledgeable – or better wise.  Enjoy the paintings not as an illustration, but as a sort of pleasant aide-memoir.  Another symbol to remember a symbol!

So where did he get his inspiration?

Born into the families of a goldsmith and a watch-maker, he grew up in Barcelona.  He began drawing classes at the age of seven at a private school and in 1907 he enrolled at the fine art academy at La Llotja, to the dismay of his father. He studied at the Cercle Artístic de Sant Lluc  and he had his first solo show in 1918 at the Dalmau Gallery, where his work was ridiculed.  In 1920, he moved to Paris, but continued to spend his summers in Catalonia.  Miró initially went to business school as well as art school, but abandoned the business world completely for art after suffering a nervous breakdown.  In 1924, Miró joined the Surrealist group. He experimented with collage and the process of painting and started to use the techniques they used to get inspiration – relaxation and hypnagogic dreaming – lucid dreaming.  In effect, he used similar techniques to Dali.
How did I think up my drawings and my ideas for painting? Well I'd come home to my Paris studio in Rue Blomet at night, I'd go to bed, and sometimes I hadn't any supper. I saw things, and I jotted them down in a notebook. I saw shapes on the ceiling...
In 1926, he collaborated with Max Ernst on designs for ballet impresario Sergei Diaghilev. 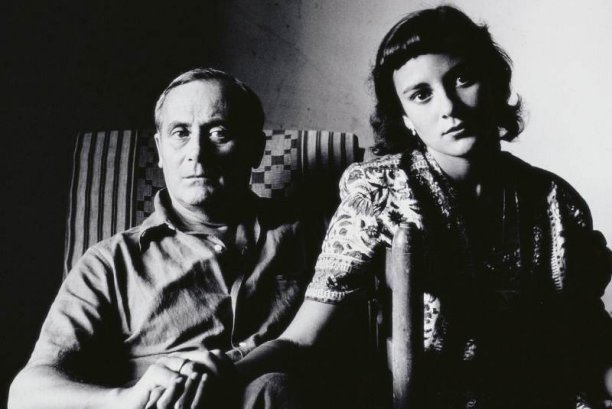 Until the outbreak of the Spanish Civil War, Miró habitually returned to Spain in the summers. Once the war began, he was unable to return home. In 1939, with Germany’s invasion of France looming, Miró relocated to Varengeville in Normandy, and on 20 May of the following year, as Germans invaded Paris, he narrowly fled to Spain (now controlled by Francisco Franco) for the duration of the Vichy Regime’s rule.  In Varengeville, Palma, and Mont-roig, between 1940 and 1941, Miró created the twenty-three gouache series Constellations. “Features of this work revealed a shifting focus to the subjects of women, birds, and the moon, which would dominate his iconography for much of the rest of his career.”

In 1948–49 Miró moved to Barcelona.  From there he produced lithographs, sculptures, ceramics, tapestries, and paintings.  Miró also created over 250 illustrated books. One such work was published in 1974, at the urging of the widow of the French poet Robert Desnos, titled "Les pénalités de l'enfer ou les nouvelles Hébrides" ("The Penalties of Hell or The New Hebrides"). It was a set of 25 lithographs, five in black, and the others in colour.  Desnos had died in the War.

In 1981, Miró's The Sun, the Moon and One Star was unveiled. This large, mixed media sculpture is situated outdoors in the downtown Loop area of Chicago.  I don’t suppose anyone realises it is symbolic.  It is, in fact, one of the tragedies, that despite the absolute simplicity of what he was trying to achieve, few people seem to understand what he was trying to do.  North South, for example, is a reference to the Cardinal directions.  But according to art historians “In Nord-Sud, the literary newspaper of that name appears in the still life, a compositional device common in cubist compositions, but also a reference to the literary and avant-garde interests of the painter.”  Oh dear. 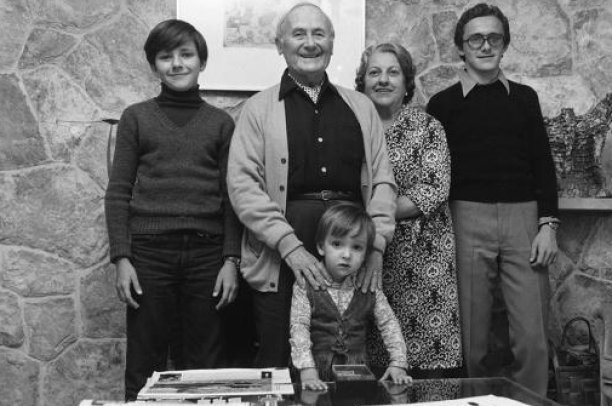 Miró and Pilar with their grandchildren Emilio, David and Joan.

Perhaps we should now have a little game, where you look up the symbols in the symbol section in the following paintings: House with Palm Tree (1918), The Table - Still Life with Rabbit (1920).

Miró suffered from heart disease later in life and eventually died in his home in Palma (Majorca) on December 25, 1983, aged 90.