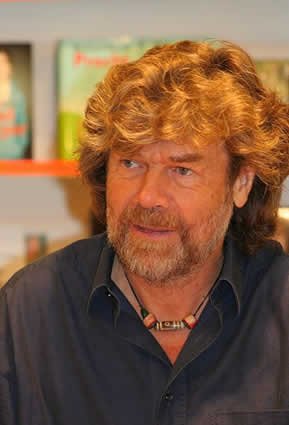 Reinhold Messner (born 17 September 1944) is a mountaineer, adventurer and explorer from the Italian autonomous province of South Tyrol,

"whose astonishing feats on Everest and on peaks throughout the world have earned him the status of the greatest climber in history."

He is renowned for making the first solo ascent of Mount Everest without supplemental oxygen and for being the first climber to ascend all fourteen "eight-thousanders" (peaks over 8,000 metres (26,000 ft) above sea level) also without oxygen.  Thus he has climbed Everest, Nanga Parbat, Cho Oyu, K2, Annapurna, Dhaulagiri,  Makalu,  Lhotse plus others, often using new routes, occasionally routes with no photographic images to help in pre-planning the route.

Born in Brixen (Bressanone), Italy, Messner is a native speaker of German and Italian, and also fluent in English. He grew up in Villnöß and spent his early years climbing in the Alps and fell in love with the Dolomites. His father, Josef Messner, was a teacher. He was also very strict and  led Reinhold to his first summit at the age of five. Reinhold had eight brothers and one sister: he later climbed with his brother Günther and made Arctic crossings with his brother Hubert.

When Reinhold was 13, he began climbing with his brother Günther, age 11. By the time Reinhold and Günther were in their early twenties, they were among Europe's best climbers.

Since the 1960s, and inspired by Hermann Buhl, he was one of the first and most enthusiastic supporters of alpine style mountaineering in the Himalayas, which consisted of climbing with very light equipment and a minimum of external help. Messner considered the usual expedition style ("siege tactics") disrespectful toward nature and mountains.

His first major Himalayan climb in 1970, the unclimbed Rupal face of Nanga Parbat, turned out to be a tragic success. Both he and his brother Günther Messner reached the summit, but Günther died two days later on the descent of the Diamir face. Reinhold lost six toes, which had become badly frostbitten during the climb and required amputation. Reinhold was criticized for persisting on this climb, but it led to a quite extraordinary spiritual experience and one which changed his life [see also Felix Kuen for more background].  The observations I have included come from his book describing this experience.

“The defining experience of my life happened a long time ago in a faraway place. It was in the Himalaya, on Nanga Parbat, that I experienced the kind of expanded state of being that occurs on two levels of consciousness, the kind that can easily lead you to believe that the brain is suffering from insane delusions. For it was there that I experienced, quite clearly, how Life and Death first occurred and how they then - almost simultaneously - became part of my biography.  What happened all those years ago remains in my memory as the story of my own death and at one and the same time the impossible story of my survival.
The traverse of Nanga Parbat from south to north-west in 1970 was, for me, far more than the crossing of a definite line in the geographical sense. It was like a border crossing from this world to the next, from life to death, from death to life.  I am recounting the whole story in detail now, in order to include all those who are a part of what happened and the pre-history that, at a subconscious level, was a part of my experience from the very start [The Naked Mountain].

In the 1970s, Messner championed the cause for ascending Mount Everest without supplementary oxygen, saying that he would do it "by fair means" or not at all. In 1978, he reached the summit of Everest with Habeler without bottled oxygen and repeated the feat, without Habeler, from the Tibetan side in 1980, during the monsoon season. This was Everest's first solo summit.

Messner has climbed in the Dolomites, the Alps, the Andes, has also crossed Antarctica on skis, together with fellow explorer Arved Fuchs and in 2004 he completed a 2,000-kilometre (1,200 mi) expedition through the Gobi desert. In 1985, Richard Bass first drew up and achieved a mountaineering challenge called ‘the Seven Summits’, which involved climbing the highest peaks of each of the seven continents. Messner suggested another list, replacing Mount Kosciuszko with Indonesia's Puncak Jaya, or Carstensz Pyramid (4,884 m/16,024 ft).  Messner himself completed this list in December 1986, aged 42,  to become the second to do so.

Messner today runs a business related to his mountaineering skills and from 1999 to 2004, he held political office as a Member of the European Parliament for the Italian Green Party (Federazione dei Verdi). He was also among the founders of Mountain Wilderness, an international NGO dedicated to the protection of mountains worldwide.

In 2003, Messner started work on a project for a mountaineering museum. On 11 June 2006, the Messner Mountain Museum (MMM) opened;  it unites within one museum the stories of the growth and decline of mountains, culture in the Himalayan region and the history of South Tyrol.  He now mainly devotes himself to the  Museum.

It is worth adding that one of the branches of his museum - Juval Castle in the Burggrafenamt looks at mystical mountains, such as Mount Kailash or Ayers Rock and their spiritual significance.