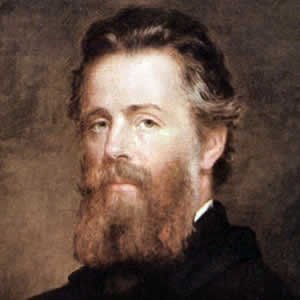 Melville's youth was greatly influenced by his father, Allan, who squandered away his and his wife Maria's inheritance, then proceeded to rack up yet more debts from doubtful business ventures. The worry and the stress of the predicament in which he had placed himself, Maria and his eight children eventually caused a mental breakdown. He became both manic and 'deranged'. Not long afterwards he died aged 49. His disgrace was so complete that Maria added an extra 'e' to their name in the vain hope of confusing all the remaining creditors. After his father's death, Herman was put to work as a bank clerk at the tender age of 12 years old in order to help make ends meet. Deprived of an education, Herman became a voracious reader. 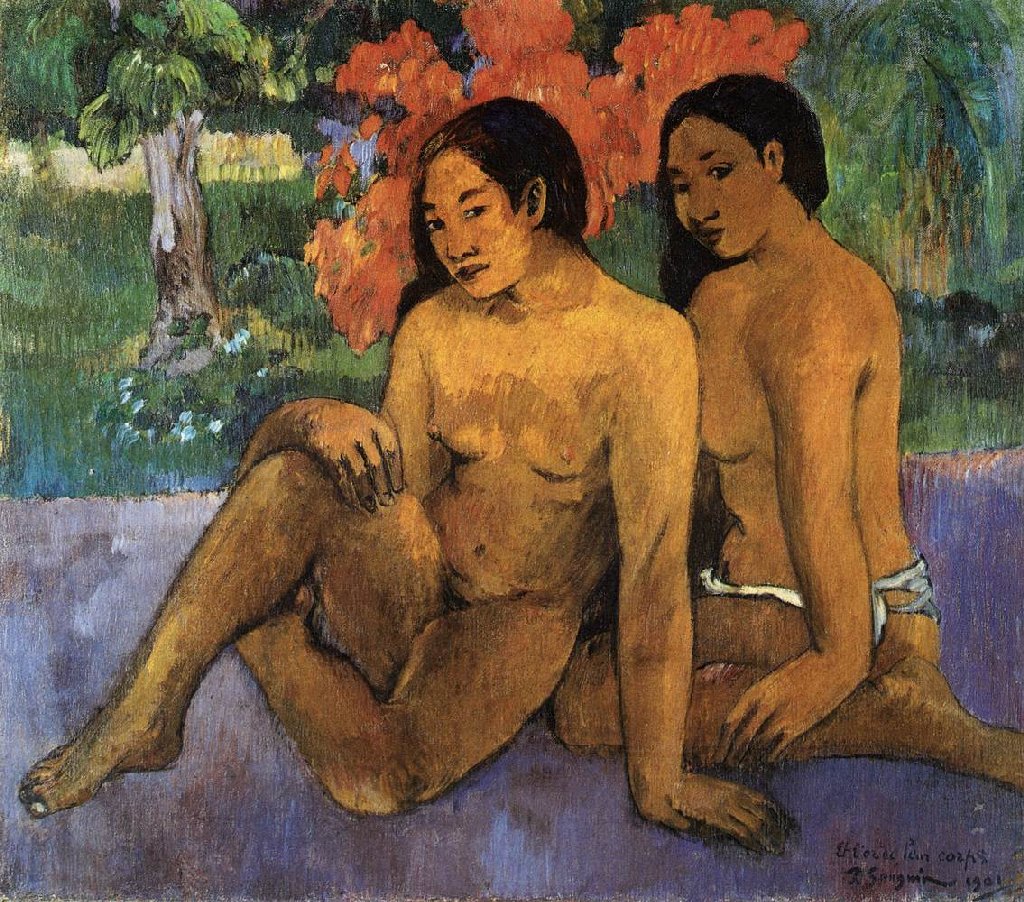 After stints as a farmer and a schoolteacher, at age 19 Melville went to sea; at aged 22 he joined a whaling ship. 'Whaling consisted of long periods of tedium followed by bouts of terror'. According to one biographer Melville discovered homosexual sex on the whaling ships and sensual uninhibited heterosexual sex in the Marquesas. He had numerous adventures, jumping ship, rejoining other ships, enjoying the society of native islanders. He arrived back in Boston in 1844. These experiences gave him the material for his first novel Typee:

The novel with its titillating innuendo and bare bosomed Polynesian damsels became a surprise best seller ...Typee also had a satirical edge; Melville suggested that compared to the Westerners who undertook to civilise them, the pagan Polynesians actually had a more just and compassionate society. 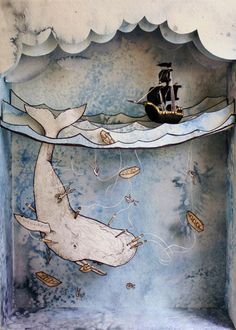 Herman's brother died in May 1846 aged only 30, putting even more pressure on Herman as the bread-winner. There is another intriguing side to his death, as his symptoms seem to point to some sort of heavy metal poisoning leading to mood disturbances, vision loss, headaches, fatigue and bleeding from the gums. If we look at the section on lead poisoning you will see that America was at the time riddled with lead from alcoholic drinks to cooking utensils, so maybe Herman's brother, his father and eventually, as we will see, Herman himself, were victims of lead poisoning.

Whether inherited or acquired via lead poisoning, Herman Melville appears to have what was then called 'delirious mania', which is now classified within the broader spectrum manic depression because its symptoms – manic bursts of activity and creativity, followed by catastrophically unproductive depression are broadly similar.

All his most loved and truly inspired novels were written during the heights of his less severe bursts of mania. When the bursts were truly severe his writing was unintelligible. With Moby Dick he had the mania under control, with Mardi Gras he went out of control. Even the publisher's reader for Mardi Gras said the later chapters were 'quite delirious' and seemed to have been 'written by a madman'. Redburn and White Jacket were also written at break neck speed and included many autobiographical details.

There is one other influence on Melville that cannot be ignored. He met and fell in love with Nathaniel Hawthorne. Both men were married, Hawthorne had children and it appears that of the two, only Melville felt very deeply. He raised Hawthorne on a metaphysical pinnacle, thus to all intents and purposes practising love with visualisation, although I doubt it was known to him as this. He wrote to Hawthorne:

I felt pantheistic then, your heart beat in my ribs and mine in yours and both in God's....whence come you Hawthorne? By what right do you drink from my flagon of life? And when I put it to my lips – lo, they are yours and not mine. I feel that the Godhead is broken up like the bread at the Supper and we are the pieces... when the big hearts strike together the concussion is stunning. 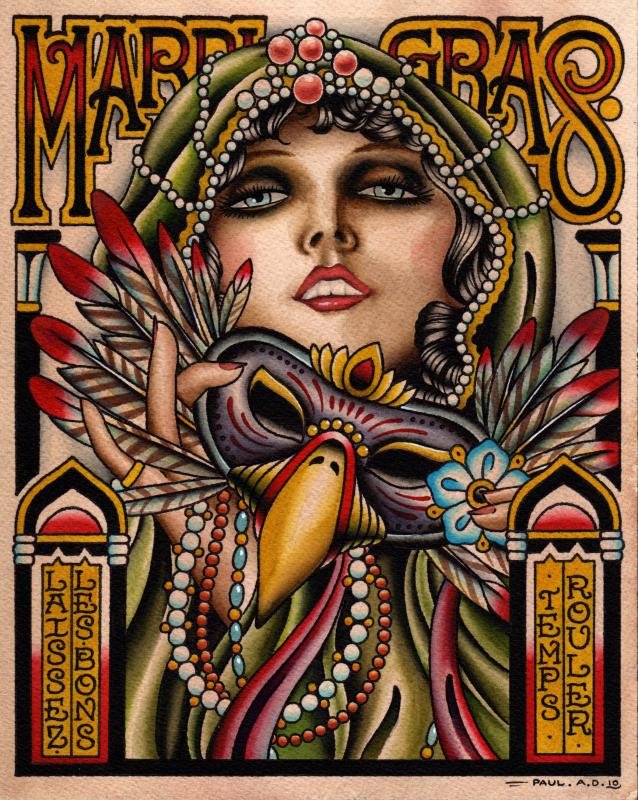 This love was at its height during the writing of Moby Dick.

There has been a vast amount of speculation on whether this love was consummated. Melville clearly knew homosexual sex from his sailing days. Hawthorne may have known it from his uncle Richard who was single and with whom he slept as a child due to the large numbers of people in the house in which they lived and the shortage of beds. He spoke of 'dark secrets' later to Melville, leading to 'the gloomy passages' in his books. So if we wildly speculate, Hawthorne had known homosexual acts through paedophilia, whereas Melville had known them from sailors!

If we now return to Melville, the years that followed the release of Moby Dick were dark indeed. Lewis Mumford wrote:

The word insanity is far too loose to be used about Melville's mental illness, even during the limited period we are considering... there were moments... between 1852 and 1858 when the outcome of his physical and mental condition may well have been in doubt. 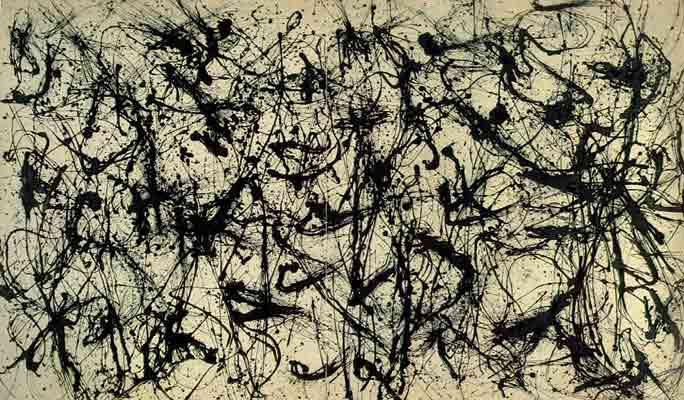 If Herman Melville suffered from lead poisoning, where did the lead come from? The answer appears to have been alcohol. The family as a whole – uncles, aunts, cousins, brothers and sisters seemed to have a predisposition for drinking excessively. Some were alcoholics, some just drank to excess. Three first cousins were alcoholics, his brother Allen was an alcoholic. In 18th century Boston, lead poisoning was fairly frequent on account of the widespread drinking of rum, which was made in stills with a lead component.   Melville was a sailor and what did sailors drink? Rum.

Although it is difficult to determine how much Melville drank, it seems certain that during the mid 1850s he came to rely on alcohol for his physical pain and emotional distress.  [a visitor also described him] - his countenance slightly flushed from whisky drinking.

Whisky too contained lead from the stills and from the decanters.
Melville himself appeared to realise he was going mad. In Moby Dick he says:

there is a wisdom that is woe, but there is a woe that is madness. And there is a Catskill eagle in some souls that can alike dive down into the blackest gorges and soar out of them again and become invisible in the sunny spaces. 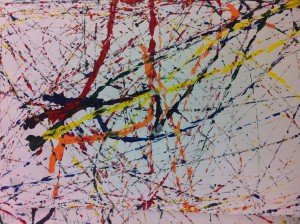 Kororoit Creek Primary school, this rainbow-colored painting
was made by rolling marbles through paint dripped onto paper
Melville lost his marbles [sorry a joke]

He appears to have in some respects realised that madness opens doors “And he who has never felt momentarily what madness is has but a mouthful of brains”.

In one extraordinary passage from Billy Budd, Melville makes a direct association – albeit in symbolic language – to the link between spiritual experience, inspiration and 'madness', he says “who in the rainbow can draw the line between where the violet tint ends and the orange tint begins? Distinctly we see the difference between colours but where does the one first blendingly enter into the other? So with sanity and insanity”.

Melville continued to write even though the depressive as opposed to manic periods increased in severity and frequency – Pierre, The Encantadas, Bartleby the Scrivener, Israel Potter, Cock-a-doodle-doo all of which contained gradually more and more symbolic references to both sexual and symbolic acts.

'Is that cock yours?'
'It is my cock' said Merrymusk looking slyly gleeful out of the corner of his long solemn face.
I stood awhile admiring the cock and wondering at the man.... 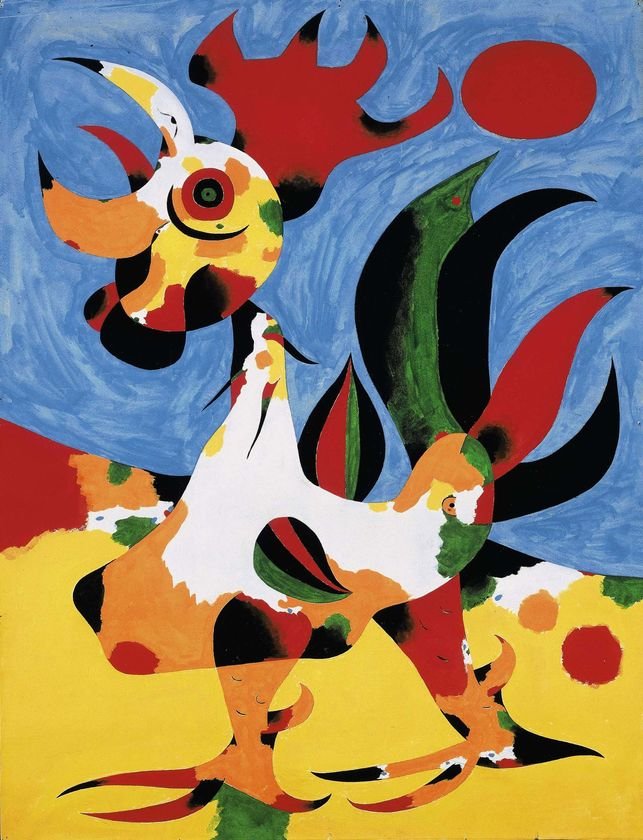 He suffered terrible pain, light sensitivity, rheumatism, he was often bedridden for weeks on end, he appears to have been moderately aggressive at times too. But not as aggressive as lead poisoning can make people. He was saved I think by his natural temperament. Described by his father when young as 'docile and amiable', he was later described as a man who “did not show either strength or determination, on the contrary he was the quietest, meekest, modestest, retiringest man you can imagine”

Dr John Ross in 'Shakespeare's tremour and Orwell's cough' postulated that he eventually developed Ankylosing spondylitis, but this is just a name for a group of symptoms again and is caused by an immunological reaction – probably to the lead.

Eventually he became a recluse. He also suffered from nosebleeds. I mention this because it is spiritually significant.

His last novel was The Confidence Man, published in 1857. He died aged 72, apparently from heart disease.

After he died in 1891, he was almost completely forgotten. It was not until the "Melville Revival" in the early 20th century that his work won recognition, especially Moby-Dick, which was hailed as one of the literary masterpieces of both American and world literature. In 1919, the unfinished manuscript for his novella Billy Budd was discovered by his first biographer, who published a version in 1924 which was acclaimed by notable British critics as another masterpiece of Melville's. He was the first writer to have his works collected and published by the Library of America.