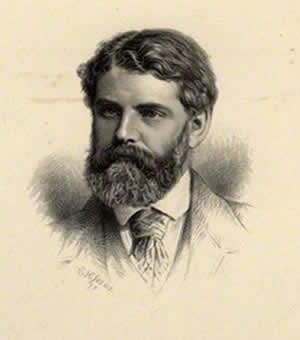 James Clerk Maxwell FRS FRSE (1831 –1879) was a Scottish theoretical physicist.  His most prominent achievement was to formulate a set of equations that united previously unrelated observations, experiments, and equations of electricity, magnetism, and optics into a consistent theory. His theory of classical electromagnetism demonstrates that electricity, magnetism and light are all manifestations of the same phenomenon, namely the electromagnetic field. Maxwell's achievements concerning electromagnetism have been called the "second great unification in physics", after the first one realised by Isaac Newton.

With the publication of A Dynamical Theory of the Electromagnetic Field in 1865, Maxwell demonstrated that electric and magnetic fields travel through space as waves moving at the speed of light.   Maxwell proposed that light is in fact undulations in the same medium that is the cause of electric and magnetic phenomena. The unification of light and electrical phenomena led to the prediction of the existence of radio waves.

Maxwell helped develop the Maxwell–Boltzmann distribution, which is a statistical means of describing aspects of the kinetic theory of gases. He is also known for presenting the first durable colour photograph in 1861 and for his foundational work on the rigidity of rod-and-joint frameworks (trusses) like those in many bridges.

His discoveries helped usher in the era of modern physics, laying the foundation for such fields as special relativity and quantum mechanics. Many physicists regard Maxwell as the 19th-century scientist having the greatest influence on 20th-century physics, and his contributions to the science are considered by many to be of the same magnitude as those of Isaac Newton and Albert Einstein.  On the centenary of Maxwell's birthday, Einstein himself described Maxwell's work as the "most profound and the most fruitful that physics has experienced since the time of Newton".

Where did his genius come from?  His mother was nearly 40 years old when he was born and his parents had had one earlier child, a daughter named Elizabeth, who died in infancy.  His birth was difficult and although not apparently premature, the results were similar.  Maxwell thus had a mixture of inherited genes and an abnormal brain to help him.  At school he was exceptionally good at mathematics, poetry and art.  Maxwell later also wrote poetry, a collection of his poems was published by his friend Lewis Campbell in 1882.

He was thought by his school friends to be slightly daft and ‘in another world’, the sign of the genius.  This other worldliness continued into his adult life.  “Many appreciations of Maxwell remark upon his remarkable intellectual qualities being matched by social awkwardness”.

Perhaps equally important is that Maxwell also appears to have had at least one, possibly more, very profound experiences.  He had or underwent [depending on how you want to phrase it] an ‘evangelical conversion’ in April 1853 and became an evangelical Presbyterian.

Maxwell died in Cambridge of abdominal cancer on 5 November 1879 at the age of 48.