Henri-Émile-Benoît Matisse (31 December 1869 – 3 November 1954) was a French artist, printmaker, and sculptor, but is known primarily as a painter.  Over his long life he experimented with a number of different approaches to art, but his style throughout was very much his own and recognisable, whether he used collage or paint, sculpture, cut-outs or canvas. 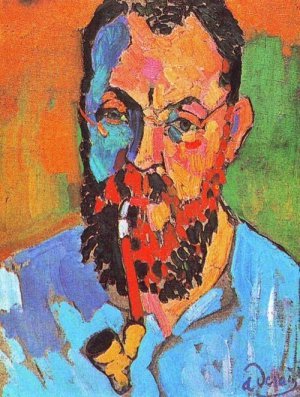 Matisse was fascinated by shape and colour.  His fondness for bright and expressive colours began with the Fauvism movement and his association with André Derain.  It became more pronounced after he spent the summer of 1904 painting in St. Tropez with Paul Signac and Henri-Edmond Cross.  In 1905 he worked with André Derain at Collioure, but his paintings are still characterised by flat shapes and controlled lines.

He studied African art and Primitivism; and spent two months in Spain studying Moorish art. He visited Morocco in 1912 and again in 1913 and while painting in Tangiers he made changes to his work, but those changes were in his use of colour – he introduced more black, for example, using it as a colour. Every new influence on him simply changed the way he used form and colour.  And all the time he was moving away from mixed colours towards intense, unmodulated colour, as in L'Atelier Rouge (1911).

Matisse saw the world almost in two dimensions with brilliant almost pure colours, no mixing, no textures, no undercoats or overcoats!  Blocks of brilliant carefully chosen colours.  In 1896 and 1897, Matisse visited the Australian painter John Peter Russell on the island of Belle Île off the coast of Brittany. Matisse later said that it was Russell who explained colour theory to him.

But Matisse came into his own when he started to use cut-outs.  He used scissors to make shapes, and then arranged the shapes on the surface of the canvas until he was happy with the composition, after which the design was executed in oils or whatever medium suited the work.   I have seen many an artist attempt to copy his approach, but though the process is relatively easy to copy, only Matisse’s compositions stand out.

The problem of course with doing something this novel and deceptively simple, when it is not simple at all, is that you get harshly criticised by those who cannot understand just how difficult it is.  At this level of simplicity the difference between a pleasing inspired composition and a bog standard ordinary one is very obvious, making the creative process exceptionally difficult.   For reasons I cannot explain, you can enter a room full of paintings attempting to copy him, but if there is a genuine Matisse amongst them, that will be the one you walk up to as being the most pleasing.

But the critics, were indeed very very hard.  "A pot of paint has been flung in the face of the public", said the critic Camille Mauclair.  So harsh and vitriolic was some of the criticism that Matisse had difficulty providing for his family.  His painting Nu bleu (1907) was burned in effigy at the Armory Show in Chicago in 1913.

Thankfully, however, he also had his supporters.  Matisse had a long association with the Russian art collector Sergei Shchukin. He created one of his major works La Danse especially for Shchukin as part of a two painting commission, the other painting being Music, 1910.

During the first decade of the twentieth century, the Americans Gertrude Stein, her brothers Leo Stein, Michael Stein and Michael's wife Sarah—were also important collectors and supporters of Matisse. In addition Gertrude Stein's two American friends from Baltimore, the Cone sisters Claribel and Etta, became major patrons, collecting hundreds of his paintings and drawings. His friends also organised and financed the Académie Matisse in Paris, a private and non-commercial school in which Matisse instructed young artists. It operated from 1907 until 1911. Hans Purrmann and Sarah Stein were amongst several of his most loyal students.

What was his inspiration?

Matisse was born in Le Cateau-Cambrésis, in the Nord department in northern France, the oldest son of a prosperous grain merchant. In 1887 he went to Paris to study law, working as a court administrator in Le Cateau-Cambrésis after gaining his qualification. He first started to paint in 1889, after his mother brought him art supplies during a period of convalescence following an attack of appendicitis. He discovered "a kind of paradise" as he later described it, and decided to become an artist, deeply disappointing his father. In 1891, he returned to Paris to study art at the Académie Julian and became a student of William-Adolphe Bouguereau and Gustave Moreau. Initially he painted still-lifes, and landscapes in a traditional style, “at which he achieved reasonable proficiency”.

With the model Caroline Joblau, he had a daughter, Marguerite, born in 1894. 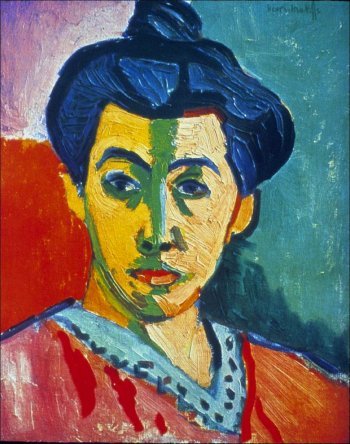 In 1898 he married Amélie Noellie Parayre; the two raised Marguerite together and had two sons, Jean (born 1899) and Pierre (born 1900).  There is an indication that although he appears to have cared deeply for his children, his marriage was not a great success.  He and his wife of 41 years separated in 1939.  His daughter Marguerite was active in the Résistance during the Second World War and was tortured (almost to death) in a Rennes prison and sentenced to the Ravensbrück concentration camp. But she managed to escape from the Ravensbrück-bound train, which was halted during an Allied air strike; she survived in the woods until rescued by fellow resisters.  Furthermore, Matisse's student Rudolf Levy was killed in the Auschwitz concentration camp in 1944.  So his life was not without grief and shock.

It was also not illness free.  In 1941, [aged 72] he underwent surgery in which a colostomy was performed. Afterwards he started using a wheelchair, and until his death he was cared for by a Russian woman, Lydia Delektorskaya, formerly one of his models.  In 1941, a nursing student named Monique Bourgeois responded to an ad placed by Matisse for a nurse. A platonic friendship developed between Matisse and Bourgeois.   But illness, grief and shock were not the principle drivers to Matisse, nor platonic love.

One major influence appears to have been his relocation in 1917 to Cimiez on the French Riviera, a suburb of the city of Nice. His work following this relocation shows a relaxation and a softening of his approach.

But I believe the principle inspiration for Matisse was the support and friendship of others – encouragement, love in its most generic sense, people who believed in him.  He was inspired by the ‘love’ – belief in him - from others.  If we take an example, American art collector Albert C. Barnes convinced him to produce a large mural for the Barnes Foundation, The Dance II, which was completed in 1932; the Foundation owns several dozen other Matisse paintings. And this support gave him the impetus to try out even more simplification and helped him move closer to the culmination of all the simplification - the cutouts.   The painting Large Reclining Nude (1935) was produced at this time. Matisse worked on this painting over a period of several months and documented the progress with a series of 22 photographs which he sent to Etta Cone.  So he was seeking her support, her encouragement, the kind word that says, ‘this is coming on really well, well done’.  Matisse appeared to thrive on kindness.

And because he was someone who relished support and kindness, people rallied and wanted to help him.  With the aid of assistants he set about creating cut paper collages, often on a large scale, called gouaches découpés. His Blue Nudes series feature prime examples of this technique he called "painting with scissors"; they demonstrate the ability to bring his eye for colour and geometry to a new medium of utter simplicity.  Watch Matisse with scissors and you are seeing all the enthusiasm a child brings to creativity.

In 1947 he published Jazz, a limited-edition artist's book of about one hundred prints of colourful paper cut collages, accompanied by his written thoughts. Tériade, a noted twentieth-century art publisher, arranged to have Matisse's cutouts rendered as pochoir (stencil) prints.

In 1952 he established a museum dedicated to his work, the Matisse Museum in Le Cateau, and this museum is now the third-largest collection of Matisse works in France.

No one calls Matisse a symbolist, but in some senses Matisse with his cut-outs represented the culmination in symbolism, for all you had was the symbol.  Only Kazimir Malevich equalled him in the pureness of expressing the idea. I think after Matisse and Malevich, artists didn't quite know where to go next.

Matisse died of a heart attack at the age of 84 in 1954. He is interred in the cemetery of the Monastère Notre Dame de Cimiez, near Nice.