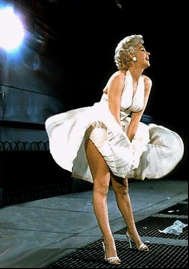 Marilyn Monroe was born on June 1, 1926, the third child born to Gladys Pearl Baker.  Monroe's birth certificate names the father as Martin Edward Mortensen with his residence stated as "unknown".  Throughout her life, Marilyn Monroe denied that Mortensen was her father. She said that, when she was a child, she had been shown a photograph of a man that Gladys identified as her father, Charles Stanley Gifford.

Gladys was mentally unstable and financially unable to care for the young Norma Jeane, so she placed her with foster parents Albert and Ida Bolender of Hawthorne, California, where she lived until she was seven.

One day, Gladys came to the Bolenders and demanded that Norma Jeane be released back into her care. Ida knew that Gladys was unstable at the time and insisted that this situation would not benefit Norma Jeane. Unwilling to cooperate, Gladys managed to pull Ida into the yard while she ran inside the house, locking the door behind her. After several minutes, Gladys walked out of the front door with one of Albert Bolender's military duffel bags. To Ida's horror, Gladys had stuffed the now screaming Norma Jeane inside the bag, zipped it up, and proceeded to leave the house. Ida charged towards Gladys and the quarrel resulted in the bag splitting open. Norma Jeane fell out and began weeping loudly as Ida grabbed her and pulled her back inside the house, away from Gladys. This was just one of the many bizarre exchanges between young Norma Jeane and her disturbed mother.

In 1933, Gladys bought a house and brought Norma Jeane to live with her. A few months after moving in, Gladys suffered a mental breakdown, beginning a series of mental episodes that would plague her for the rest of her life. In My Story, Monroe recalls her mother "screaming and laughing" as she was forcibly removed to the State Hospital in Norwalk.

Norma Jeane was declared a ward of the state. 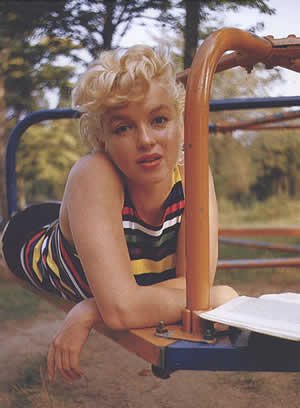 Gladys' best friend, Grace McKee, became her guardian. When she was 9, McKee married Ervin Silliman "Doc" Goddard in 1935, and subsequently sent Monroe to the Los Angeles Orphans Home (later renamed Hollygrove), followed by a succession of foster homes. While at Hollygrove, several families were interested in adopting her; however, reluctance on Gladys' part to sign adoption papers thwarted those attempts. In 1937, Monroe moved back into Grace and Doc Goddard's house, alongside one of Doc's daughters from a previous marriage. This arrangement did not last long, as Doc attempted on several occasions to sexually assault her.

Grace sent Monroe to live with her great-aunt, Olive Brunings in Compton, California. This arrangement also did not last long, as Monroe was assaulted (some reports say sexually) by one of Olive's sons while attending middle school.

And as we all now know Norma Jeane became Marilyn Monroe.

On August 5, 1962, at 4:25 a.m., LAPD sergeant Jack Clemmons received a call from Dr. Ralph Greenson, Monroe's psychiatrist, saying that Monroe was found dead at her home in Brentwood, Los Angeles, California.   She was 36 years old.

At the subsequent autopsy, eight mg/dL of chloral hydrate and 4.5 mg/dL of Nembutal were found in her system, and Dr. Thomas Noguchi of the Los Angeles County Coroners office recorded cause of death as "acute barbiturate poisoning", resulting from a "probable suicide".