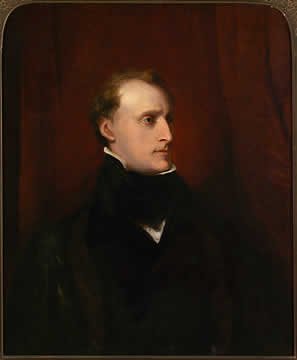 Francis Humberston Mackenzie, 1st Baron Seaforth FRS (1754 –1815) was a British politician, (by right of his ancestry) Chief of the Highland Clan Mackenzie and raised the renowned 78th (Highlanders) Regiment of Foot.  In 1794 he was elected a Fellow of the Royal Society. He was appointed Lord Lieutenant of Ross and was raised to the peerage of the United Kingdom as Lord Seaforth and Baron Mackenzie of Kintail on 26 October 1797.

When he was about twelve he suffered from scarlet fever which resulted in his losing his hearing and almost all speech, thereafter he was known as MacCoinnich Bodhar (Deaf Mackenzie) in Gaelic. He nearly recovered the use of his tongue but during the last two years of his life, mourning the deaths of his four sons, he never made the attempt to articulate.  He was said to possess the gift of ‘second sight’ brought on by the illness but also attributed to his genetic inheritance.  He had an abiding interest in the spiritual as a consequence of a very intense experience he had when he was ill, together with a curse placed on his family that finally worked its way out and came to pass during his lifetime.  He became the legendary last of his line, fulfilling the prophecy,  as he saw each of his sons die.  In 1801, Lord Seaforth was appointed Grand Master of the Freemasons in Barbados where he was at the time.

Despite his infirmities, he was a caring man.  He was Governor of Barbados from 1800–06, during which period he reformed slavery on the island, prohibiting the killing of slaves and easing discrimination against free blacks. Research shows that he probably sought to avoid the curse of Brahan Seer by choosing to use the surname Seaforth. As a result, his descendants from Guyana are known by the name of Seaforth. Records in Demerara identify Francis Mackenzie as Francis Seaforth

The last Baron of Kintail, Francis, Lord Seaforth was a nobleman of extraordinary talents, who must have made for himself a lasting reputation had not his political exertions been checked by painful natural infirmities.’ Walter Scott