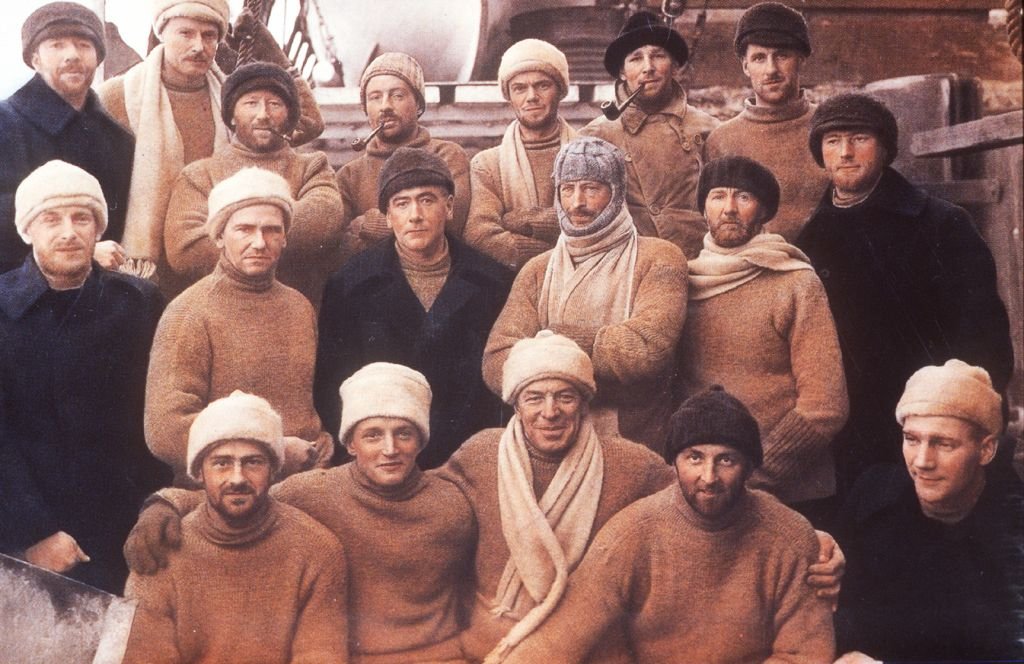 She sailed from London on 1 August 1929 under the command of Captain John Davies, a well-known Antarctic explorer and shipmaster. He had to train his crew, as they were unfamiliar with the ways of a sailing ship. Evidently he did this well, as the first voyage of exploration was a success. The ship sailed on and off the Antarctic coastline between 80 and 45 degrees east with the sighting of Kemp and Enderby Lands and the discovery and naming of MacRobertson Land. The ship returned to Melbourne from the Antarctic where MacKenzie took command during November 1930 whilst Captain Davies returned to the service of the commonwealth government as Director of Navigation.

RRS "Discovery" signed by Captain K.N. MacKenzie – inscribed
'On we go, sincerely yours'

On the ‘DISCOVERY’S’ second B.A.N.Z.A.R.E. Antarctic voyage (1930–1931), she navigated along the Antarctic Coast from 178 to 62 degrees east with sightings and landings on King George V land and the discovery and naming of Princess Elizabeth Land and Banzare Land. The name ‘Princess Elizabeth Land’ was selected on MacKenzie’s suggestion. And the newly discovered 'MacKenzie Sea' in 72 degrees east was named after him. Again the voyage went well; she returned to Hobart and then Melbourne in March 1931. With her scientific and exploration work completed, MacKenzie sailed the ship back to London by way of Wellington and the Cape Horn arriving back in London’s East India Dock in August 1931. She was found to be in an excellent condition and undamaged. Subsequently MacKenzie was awarded the Polar Medal, inscribed 'Antarctica 1929–1931', by King George V at Buckingham Palace. London.

In 1933, MacKenzie was invited by the committee of the John Murray Expedition to take command of the new research ship ‘MABAHISS”, an Egyptian naval vessel. She was to conduct voyages of oceanographic research of the north western Indian Ocean with scientific staff from Cambridge and Cairo Universities. Again MacKenzie was granted 'leave of absence with full promotion' by the Ellerman City Line, whilst he was gazetted into the Egyptian Navy with the rank of 'Bimbashi' (commander); then he sailed in command from Alexandria in September 1933 making continuous voyages of research in the Indian Ocean until the ship's safe return to Alexandria in May 1934.

Although MacKenzie’s illustrious career marks him out as a form of inspired navigator and sailor, the observation we have for him took place when he was very young, somewhat indicating he was a gifted man.

Kenneth Norman MacKenzie was born in Oban, Argyllshire on the west coast of Scotland in 1897 he was the third of four sons.  Their parents split up in 1904 when their mother, Catherine MacKenzie took her four sons to her father's home in Baugh on the Hebriddean Island of Tiree where her father, Duncan MacFarlane, served as the minister in the Baugh Church.

Duncan was one of a family of brothers – four of them, who all became parish ministers in Scotland (in Tiree, Elgin, Greenock and then Glenorchy, Tobermory and then Tiree); all were born on Tiree.

The schooling in Tiree was considered unsatisfactory, it only being a small island. So the four MacKenzie sons were sent to stay for their school days with their uncle, Dugald MacFarlane, parish minister for 51 years of St Columba's Church in Kingussie, in Inverness-shire in the heart of the Scottish Highlands.

In later years, (1938–1939) Dugald was the Moderator of the General Assembly of the Church of Scotland.” Dugald was their mother's brother. Certainly his uncle was a strict disciplinarian who set a high standard. Evidently the MacKenzie boys were very much 'sons of the manse'.”

On one of his voyages to Australia, MacKenzie met Lillian Green, an Australian farmer's daughter whom he subsequently married.  MacKenzie and his wife had two daughters, born in 1934 and 1943 and a son, born in 1938. His later life was troubled by ill health but he greatly enjoyed his family life.

His health, never really good after his experiences in the First World War, had a sharp setback when he suffered a heart attack in 1938. He never recovered but worked on under increasing debility and strain till he died in 1951, still only 53 years of age.