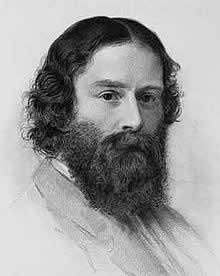 Lowell was the son of the Reverend Charles Russell Lowell, and the brother of Robert Lowell.   He was the youngest of six children.

While studying law, he contributed poems and prose articles to various magazines and it is clear that it was poetry that was his greatest love.

Early in his career, James Russell Lowell's writing was influenced by  Emanuel Swedenborg, causing Frances Longfellow (wife of the poet Henry Wadsworth Longfellow) to mention that "he has been long in the habit of seeing spirits." He composed his poetry rapidly when inspired by an "inner light" but could not write to order.  So what caused him to see spirits?  It appears that the principle driver to his openness to spiritual influence was grief and grief of a monumental order. 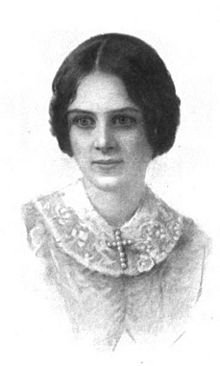 In late 1839, Lowell met Maria White and the two became engaged in the autumn of 1840. Maria's father then insisted that their wedding be postponed until Lowell had gainful employment.  He published his first collection of poetry in 1841 so an outpouring of frustration from unrequited love .  They were finally married on December 26, 1844, five years after he had met her.   Lowell was deeply in love with Maria, he said she was made up "half of earth and more than half of Heaven."  Like Lowell, she wrote poetry, and the next twelve years of Lowell's life were deeply affected by her influence. He said his first book of poetry, A Year's Life (1841), "owes all its beauty to her."   But Maria was in poor health, and thinking her lungs could heal there, the couple moved to Philadelphia shortly after their marriage.

In the spring of 1845, the Lowells returned to Cambridge, Massachusetts, to make their home at Elmwood – the Lowell family home. They had four children, - only one (Mabel, born 1847) survived past infancy.

Their first, Blanche, was born December 31, 1845, but lived only fifteen months.  In 1850, Lowell's mother died unexpectedly.  Rose, born in 1849, survived only a few months as well; their only son, Walter, was born in 1850 but died in 1852. Lowell was deeply affected by the loss of  his children. His grief over the death of his first daughter was expressed in his poem "The First Snowfall" (1847).  Rose's death left Lowell distraught and reclusive for six months. He wrote to a friend that death "is a private tutor. We have no fellow-scholars, and must lay our lessons to heart alone."

In the Spring of 1853, Maria, who had been suffering from poor health for many years, became very ill  and died on October 27 of tuberculosis.  Just before her burial, her coffin was opened so that her daughter Mabel could see her face while Lowell "leaned for a long while against a tree weeping," according to Henry Wadsworth Longfellow and his wife, who were in attendance. 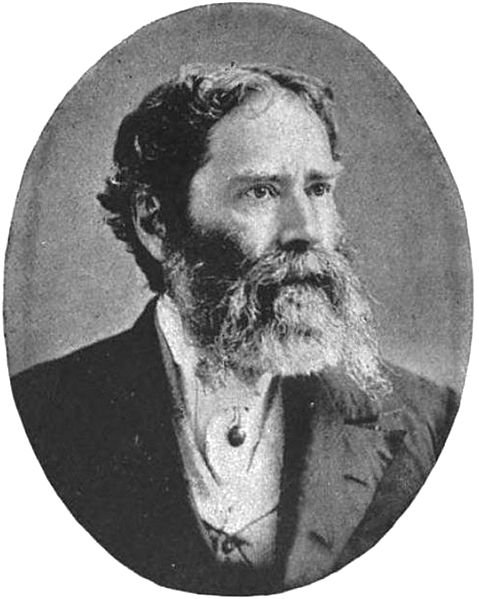 He cut himself off from others, becoming reclusive at Elmwood, and his private diaries from this time period are riddled with the initials of his wife. On March 10, 1854, for example, he wrote: "Dark without & within. M.L. M.L. M.L." Longfellow, a friend and neighbor, referred to Lowell as "lonely and desolate."

But the tide turned.  Lowell was offered the Smith Professorship of Modern Languages at Harvard, a post vacated by Longfellow, at an annual salary of $1,200,  Lowell accepted the appointment, with the proviso that he should have a year of study abroad. He set sail on June 4, leaving his daughter Mabel in the care of a governess named Frances Dunlap. He visited, Paris, and London, spending time with friends including, Robert and Elizabeth Browning and Leigh Hunt. He returned to the United States in the summer of 1856 and began his college duties.  He turned out to be a somewhat unconventional teacher...

"True scholarship consists in knowing not what things exist, but what they mean; it is not memory but judgment."

Still grieving the loss of his wife, during this time Lowell avoided Elmwood and instead lived on Kirkland Street in Cambridge, an area known as Professors' Row. He stayed there, along with his daughter Mabel and her governess Frances Dunlap, until January 1861. 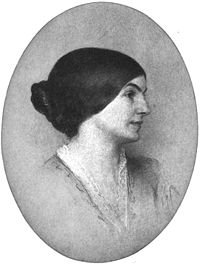 Lowell had intended never to remarry after the death of his wife Maria. However, in 1857, surprising his friends, he became engaged to Frances Dunlap, who many described as simple and unattractive [though her photo left rather contradicts this].  Lowell and Dunlap married on September 16, 1857,  Lowell wrote, "My second marriage was the wisest act of my life, & as long as I am sure of it, I can afford to wait till my friends agree with me."

In January 1861, Lowell's father died of a heart attack, inspiring Lowell to move his family back to Elmwood. As he wrote to his friend Briggs, "I am back again to the place I love best. I am sitting in my old garret, at my old desk, smoking my old pipe... I begin to feel more like my old self than I have these ten years."

But what is apparent is this sudden new found contentment and happiness, and this little slice of domestic peace, affected his ability to produce poems.  From that point most of his work centred on his prose -  abundantly presented in the pages of the North American Review during the years 1862–1872. For the Review, he served as a co-editor along with Charles Eliot Norton. Lowell's reviews for the journal covered a wide variety of literary releases of the day, he wrote few poems and seemed almost unable to do so.

Ralph Waldo Emerson noted that during these better days, Lowell could still write poetry if he chose, but it became more technical and less inspired   "it rather expresses his wish, his ambition, than the uncontrollable interior impulse which is the authentic mark of a new poem... and which is felt in the pervading tone, rather than in brilliant parts or lines."

Shortly after Lincoln's assassination, for example, Lowell was asked to present a poem at Harvard in memory of graduates killed in the war. His poem, "Commemoration Ode," cost him sleep and his appetite, but was delivered on July 21, 1865, after a 48-hour writing marathon.   It was not a great success.  "I did not make the hit I expected," he wrote, "and am ashamed at having been tempted again to think I could write poetry, a delusion from which I have been tolerably free these dozen years." 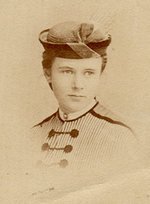 Mabel Lowell, his only surviving  daughter

But even his technical poems had an impact.  Lowell's poem "The Present Crisis,"  addressed the national crisis over slavery leading up to the Civil War, and it had a big impact.  Martin Luther King, Jr. frequently quoted the poem in his speeches and sermons.

Lowell spent most of the latter part of his life in politics.  His second wife, Frances, died on February 19, 1885.

In the last few months of his life, Lowell struggled with gout, sciatica in his left leg, and chronic nausea; by the summer of 1891, doctors believed that Lowell had cancer in his kidneys, liver, and lungs. His last few months, he was administered opium for the pain and was rarely fully conscious. He died on August 12, 1891, at Elmwood.

... The proof of poetry is, in my mind, that it reduces to the essence of a single line the vague philosophy which is floating in all men's minds, and so renders it portable and useful, and ready to the hand... At least, no poem ever makes me respect its author which does not in some way convey a truth of philosophy