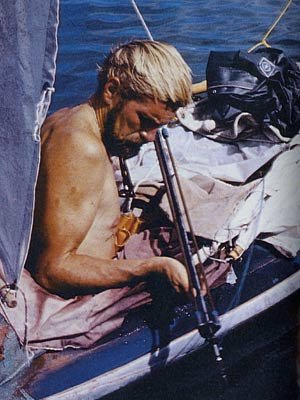 Hannes Lindemann (born 28 December 1922) is a German doctor, navigator and sailor. He made two solo transatlantic crossings, one in a sailing dugout canoe made while working in Liberia and the second in a 17-foot Klepper Aerius II double folding kayak, modified to carry two masts and an outrigger.

His book Alone at Sea documents the trips, which were totally unassisted.

He was motivated to make the trips by an interest in how the human body and mind respond to survival at sea, a theme which the Kon-Tiki (1947) and Alain Bombard (1952) explored in earlier ocean voyages.

His kayak was delivered to the Canary Islands, before sailing to the Caribbean. He very rarely paddled, though used a paddle when rudders broke. He carried 154 pounds (70 kg) of supplies, much of it canned comestibles, some of which he ditched on setting out as the kayak was too heavy. He caught fish and gathered rainwater to supplement his rations. 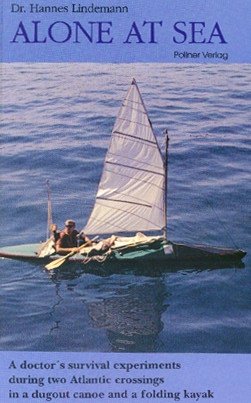 The 3,000-mile (4,800 km) crossing to St. Martin took him 72 days. Towards the end of that trip he encountered storms of "wind force 8, gusting to force 9" when he capsized twice during a period of hallucinations brought on by fatigue and sleep deprivation. At times he described what might be described as altered states – safe in the cocoon of his sodden kayak while storms raged around him for days.

He was convinced that in a survival situation the mind gave up long before the body (or indeed the craft).

To help accomplish the second trip he trained himself in sleep deprivation as well as mentally, which he described at times as prayer, meditation, autogenic training and ingraining his sub-conscious with affirmational mottos like "I will make it" and "Keep going west".

The following adds a little to the description above [from Wikipedia] and was obtained from a book review site.

Many packboaters have heard of Alone at Sea, Hannes Lindemann’s famous account of his sail-assisted, mid-Fifties Atlantic crossings, first in a dug-out canoe and then in a production Klepper folding kayak. As a doctor, Lindemann used his expedition to examine the physiology and psychology of enduring long weeks at sea alone. 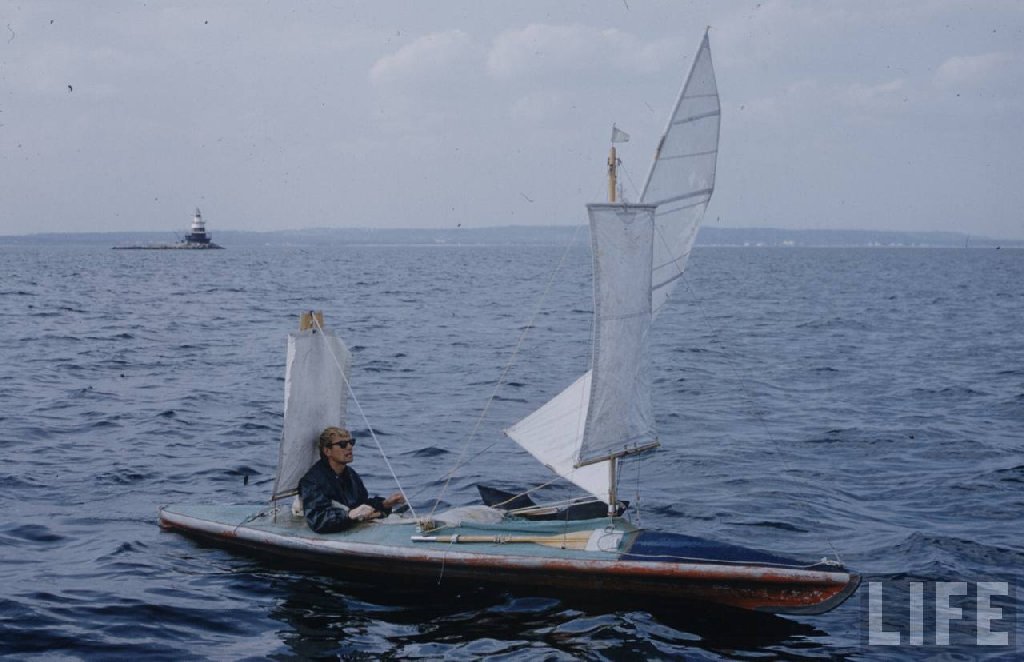 A couple of years after meeting Alain Bombard in Tangiers, Lindemann  put himself to the test – crossing the Atlantic alone in, off all things, a heavily-keeled West African dug-out canoe he had made in Liberia where he was stationed at the time.

He took off again a year later, this time in a smaller and less robust Klepper Aerius folding kayak, fitted with two masts and an all-important outrigger to partially compensate for the lack of a keel. Little changed, the legendary Aerius is still made by Klepper today.

There are no less than four trips covered in the book which adds up to a lot of horrendous days and nights at sea with waves washing over his decks and smashing of rudders. The end of the Klepper trip does pick up though, as utterly exhausted through lack of sleep, Lindemann drifts into hallucinations and altered states following two weeks of terrible storms. His great achievement was preparing himself as well as he could mentally, using prayer, meditation, what we now call ‘visualisation’ as well as affirmation (‘I will make it’; ‘Keep going west’), and what was then known as autogenic training, a relaxation technique about which he was later to write manuals. All this must have helped Lindemann keep going, when other individuals would have allowed a capsized boat to slip away. Towards the end of the book there’s a telling photo on a Caribbean quay of a hunched, emaciated but still smiling figure; Lindemann had lost over 25% of his body weight and on arrival his pulse was down in the 30s.

Lindemann succeeded in making the crossing from the Canaries with his own provisions plus what nature provided with no human assistance whatsoever.

Dr Lindemann sailed the Atlantic in a native canoe. Dr Lindemann 33 years old accomplished the feat in 65 days. The boat is 73 cm broad and 7,80 long. Dr Lindemann managed the trip with a minimum of navigation knowledge and equipment, the 3,400 sea miles from Las Palmas to St Croix (West India) is a world record.  Arriving in Hamburg on board the Swiss ship 'Cristallina', the bachelor-surgeon was warmly welcomed.  The newsreel shows:
LS. Swiss ship "Cristallina" unloading at dock side.
MS. Dr. Hannes Lindemann's canoe being raised from the hold.
Various shots, the canoe being unloaded and Dr. Lindemann inspecting it.
Various shots, showing the boat being made (man sculpting hollow out of what looks like one piece of wood), and launched.
CU. From boat, showing mast, and sea.
CU. Bird in water.
CU. Whale in water.
CU. From boat, pan up to sails
MS. Native band playing instruments (2 shots)
CU. Chart, showing route Dr. Lindemann took.
MS. Smiling Dr. Lindemann walking along deck and being greeted.