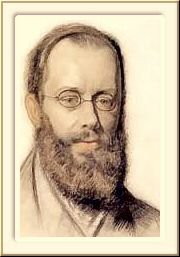 Edward Lear (12 or 13 May 1812 – 29 January 1888) was an English artist, landscape painter, cartoonist, illustrator, musician, composer, author and poet, who is now known mostly for his literary nonsense in poetry and prose, especially his limericks, a form he popularised.

The irony is that his Limericks are the least representative of his talent. Few realise how very gifted Lear was.  His ornithological paintings were exceptional, his landscapes were beautifully composed works full of Light and beauty, and few realise he was a gifted musician and a composer setting his poems to music.

Lear suffered from lifelong health afflictions, very serious debilitating afflictions. From the age of six he suffered frequent grand mal epileptic seizures, and bronchitis, asthma, and during later life, partial blindness. Lear experienced his first seizure at a fair near Highgate with his father. The event scared and embarrassed him.

a bird hovering between life
and death self portrait

Lear felt lifelong guilt and shame for his epileptic condition. His adult diaries indicate that he always sensed the onset of a seizure in time to remove himself from public view. When Lear was about seven years old he began to show signs of ‘deep melancholia’, which in the circumstances was to be expected.  He referred to these bouts of extreme unhappiness as "the Morbids."  Lear suffered all his life from epilepsy and melancholia.

And he had no solace from his friendships or relationships.  Lear's most fervent and painful friendship involved Franklin Lushington. He met the young barrister in Malta in 1849 and then toured southern Greece with him. Lear developed a passion for him that Lushington did not reciprocate. Although they remained friends for almost forty years, until Lear's death, the disparity of their feelings for one another constantly tormented Lear. Indeed, none of Lear's attempts at male companionship were successful; the very intensity of Lear's affections doomed every relationship.

Epilepsy, asthma, bronchitis, and to add to this we can add shyness and timidity and a life of loneliness and rejection.  And yet he produced nonsense and humour, stunning works of art, music and poetry.  If ever there was an example of someone who managed to drag heaven from hell, it is Lear.

Although Lear’s poetry is pure fantasy, there is a deep melancholic edge that runs through it.  Most people are aware of the Jumblies, but in the poem The Dong with the luminous nose he tells us that:

Long years ago The Dong was happy and gay,
Till he fell in love with a Jumbly Girl
Who came to those shores one day…….
Happily, happily passed those days!
While the cheerful Jumblies staid;
They danced in circlets all night long,
To the plaintive pipe of the lively Dong,
In moonlight, shine, or shade.
For day and night he was always there
By the side of the Jumbly Girl so fair,
With her sky-blue hands and her sea-green hair;
Till the morning came of that hateful day
When the Jumblies sailed in their sieve away,
And the Dong was left on the cruel shore
Gazing, gazing for evermore,— 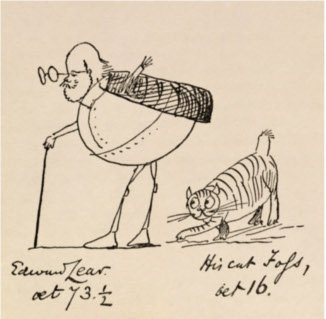 The closest Lear came to marriage was two proposals, both to the same woman 46 years his junior.

They were never accepted and in the end she walked out of his life.

Lear’s only real trusted companion was his Albanian Souliote chef, Giorgis, a faithful friend and, as Lear complained, a thoroughly unsatisfactory chef.

His only other trusted companion was his cat, Foss, who died in 1886 and was buried with some ceremony in a garden at Villa Tennyson. 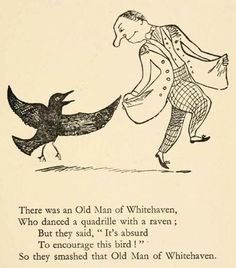 There is the sense in all his nonsense verse that he did not really feel part of the world at large, a sort of elf catapulted into a world he did not understand. A world furthermore he would much rather have escaped from – too cruel, too cunning, too manipulative.  A world that seemed to be always saying that something could not be done and was not allowed.   In Lear's limericks the first and last lines usually end with the same word rather than rhyming. For the most part they are truly nonsensical and devoid of any punch line or point. But, a typical thematic element is the presence of a callous and critical "they."

There are some remarkable parallels between Lewis Carroll and Edward Lear.  Lear had a natural affinity for children, and it was for the Earl of Derby’s grandchildren that he produced A Book of Nonsense (1846, enlarged 1861).  Lear may even have been a mystic like Carroll, but the evidence is less solid.  All we know is that he travelled to all the places a good mystic would want to travel to.

After 1837 he lived mainly abroad. The places are a rollcall of sacred geography -  Italy, Greece, Albania, Palestine, Syria, Egypt, and, later, India and Ceylon [now Sri Lanka]. He visited Greece and Egypt during 1848–49, and toured India and Ceylon during 1873–75. During his nomadic life he lived, among other places, in Rome.

Lear - in the campagna near Rome

He also appears to have spent some time at Mount Athos, which is extremely significant from a mystical point of view. 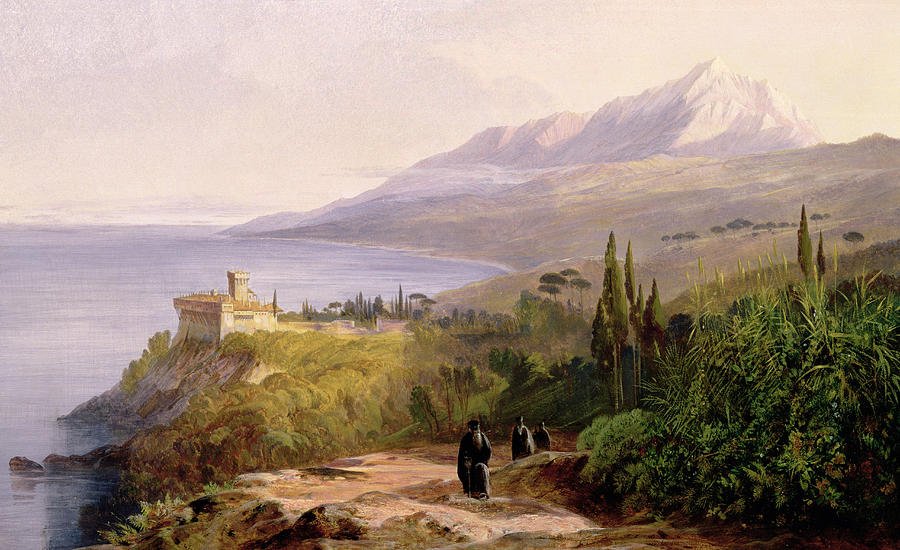 There are also the self portraits.  Lear frequently drew himself as a bird.  Birds are symbolic and Lear, being a poet would have known that.  He painted himself as a little plump bird unable to fly or barely able to fly and in this we also have a clue.  Lear would probably have wanted to be a swan, but he clearly felt he had failed at this. 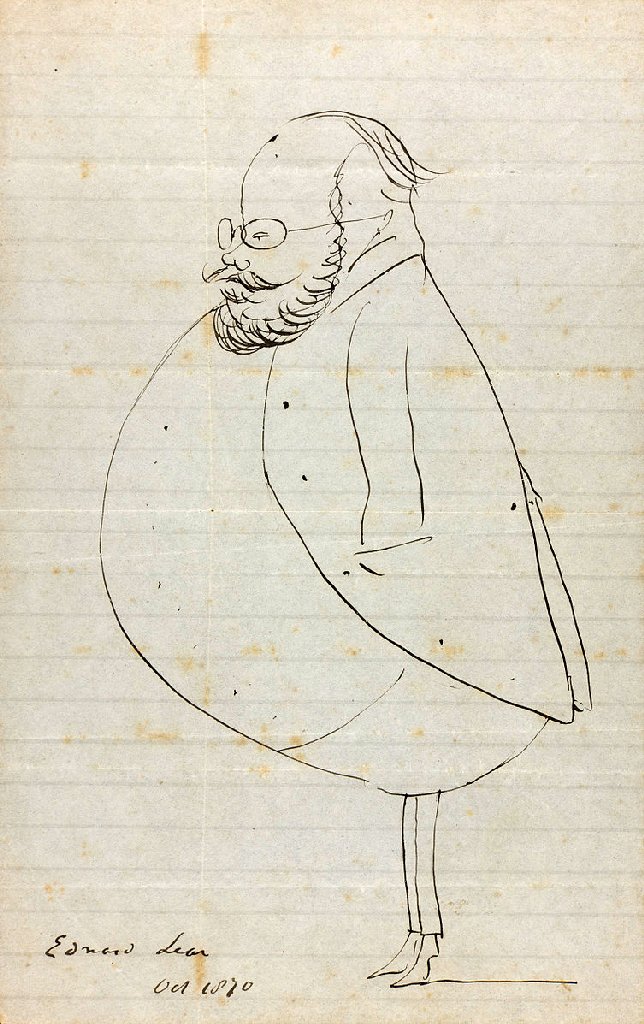 Said the Kangaroo, "I'm ready,
All in the moonlight pale; But to balance me well, dear Duck, sit steady,
And quite at the end of my tail."

So away they went with a hop and a bound;
And they hopped the whole world three times round.
And who so happy, oh! who, As the Duck and the Kangaroo?

In 1846 Lear published A Book of Nonsense, a volume of limericks that went through three editions and helped popularize the form and the genre of literary nonsense. 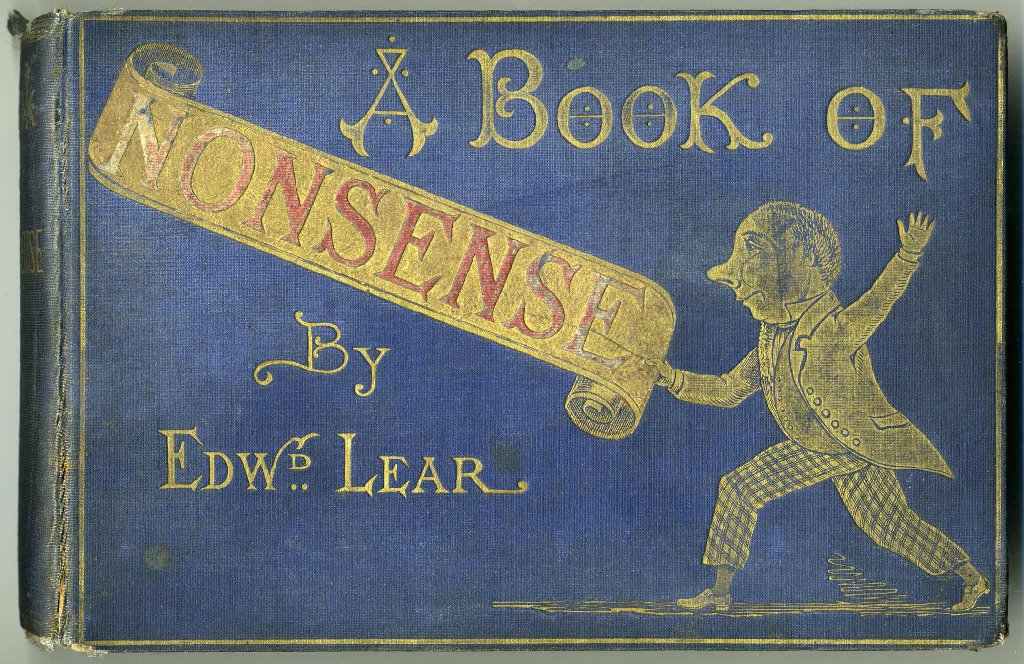 In the end Lear wrote about animals because he felt more in tune with animals, people were a mystery.  And all he wanted his life was to go home, to go home.

Then Mr. Daddy Long-legs
And Mr. Floppy Fly Rushed downward to the foamy sea
With one sponge-taneous cry: And there they found a little boat,
Whose sails were pink and gray; And off they sailed among the waves,
Far and far away: 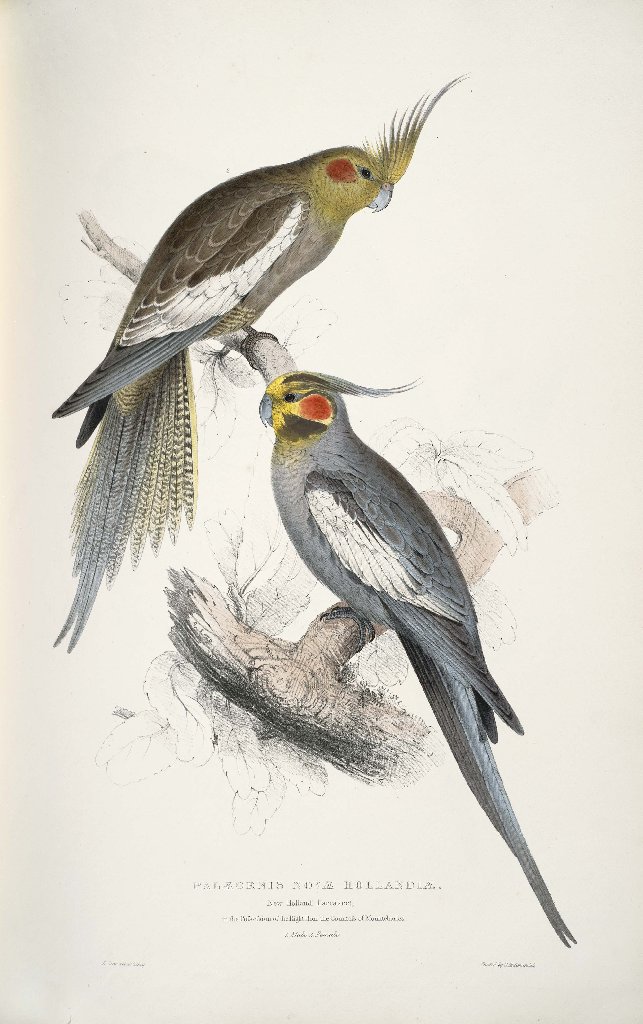 Lear was already drawing "for bread and cheese" by the time he was aged 16 and soon developed into a serious "ornithological draughtsman" employed by the Zoological Society and then from 1832 to 1836 by the Earl of Derby, who kept a private menagerie at his estate Knowsley Hall.

Lear's first publication, published when he was 19 years old, was Illustrations of the Family of Psittacidae, or Parrots in 1830.  Lear became one of the greatest ornithological artists of his era, he contributed to John Gould's works and published three volumes of bird and animal drawings.

In 1835 he decided to become a landscape painter and started making coloured drawings during his journeys, which he reworked later, sometimes as plates for his travel books.  Lear published seven illustrated travel books  The Illustrated Travels of a Landscape Painter. Popular and respected in his day, Lear’s travel books have largely been ignored in the twentieth century.

An indefatigable worker, he produced innumerable pen and watercolour sketches of great topographical accuracy. He worked these up into the carefully finished watercolours and large oil paintings that were his financial mainstay.  His landscape style often shows views with strong sunlight, with intense contrasts of colour and Light, the Light................

Throughout his life he continued to paint seriously. He had a lifelong ambition to illustrate Tennyson's poems; near the end of his life a volume with a small number of illustrations was published.

Lear played the accordion, flute, and guitar, but primarily the piano. He composed music for many Romantic and Victorian poems, but was known mostly for his many musical settings of Tennyson's poetry. He published four settings in 1853, five in 1859, and three in 1860. Lear's were the only musical settings that Tennyson approved of.

Lear also composed music for many of his nonsense songs, including "The Owl and the Pussy-cat," but only two of the scores have survived, the music for "The Courtship of the Yonghy-Bonghy-Bò" and "The Pelican Chorus." While he never played professionally, he did perform his own nonsense songs and his settings of others' poetry at countless social gatherings. 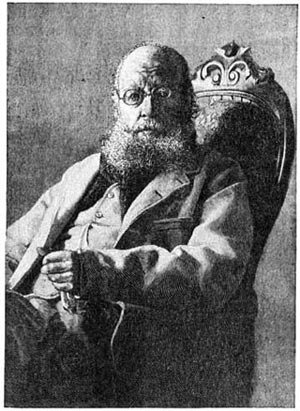 Lear was born into a middle-class family at Holloway, North London, the penultimate of twenty-one children (and youngest to survive) of Ann Clark Skerrett and Jeremiah Lear. He was raised by his eldest sister, also named Ann, 21 years his senior. Owing to the family's limited finances, Lear and his sister were required to leave the family home and live together when he was aged four. Ann doted on Edward and continued to act as a mother for him until her death, when he was almost 50 years of age.

Lear travelled widely throughout his life and eventually settled in San Remo, on his beloved Mediterranean coast, in the 1870s, at a villa he named "Villa Tennyson."

After a long decline in his health, Lear died at his villa in 1888 of heart disease, from which he had suffered since at least 1870. Lear's funeral was said to be a sad, lonely affair by the wife of Dr. Hassall, Lear's physician, none of Lear's many lifelong friends being able to attend.

Lear is buried in the Cemetery Foce in San Remo. On his headstone are inscribed these lines about Mount Tomohrit (in Albania) from Tennyson's poem To E.L. [Edward Lear], On His Travels in Greece:

all things fair.
With such a pencil, such a pen.
You shadow forth to distant men,
I read and felt that I was there. 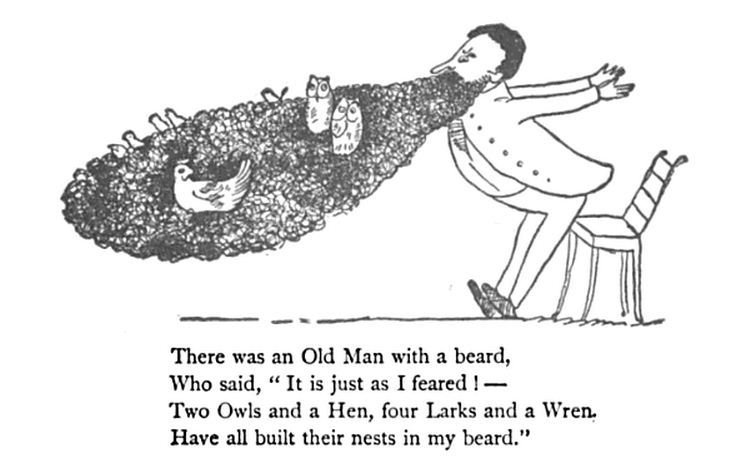