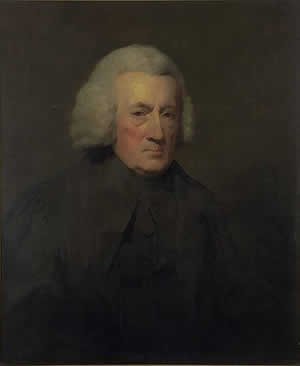 William Law (1686 – 1761) was born at Kings Cliffe, Northamptonshire.  He was one of the great theologians, clerics, and educators of the Church of England. As such one would think he had no place on this site.  But he had a spiritual streak which emerged more and more later in life and occasionally appeared when he wrote of his horror at the politics that was religion.  Educated at Cambridge, he eventually took a teaching position there in addition to being ordained in the Church of England.

He lost his position at Cambridge for being a Non-Juror (the Church of England being a state religion, clerics and others were required to swear oaths of allegiance to the monarch).

He also thrived on controversy taking up positions often in direct opposition to established thought and occasionally taking up extremely controversial positions for his time.

He wrote the first work, 'A Serious Call to a Devout and Holy Life', one of his best-known works, while in retirement as tutor in the Gibbon household (he was tutor to the father of the historian noted for the work on the Decline and Fall of the Roman Empire.  His pupil then went abroad, but Law remained in Gibbon's house for more than ten years, acting as a religious guide not only to the family but to people who came to consult him).

His early writings were concerned mostly with the political role of the church and whether church and government should be one or separate.  But he also wrote works on morality, Deism, and the battles between the Anglican and Catholic churches.  The first of his controversial works was Three Letters to the Bishop of Bangor (1717), which dealt with the political role of the church.  Law's next controversial work was Remarks on Mandeville’s  Fable of the Bees (1723), in which 'he vindicates morality on the highest grounds'; supporters of Law state that ‘for pure style, caustic wit and lucid argument this work is remarkable’.  In his Case of Reason (1732), Law actually opposed Deism, which is none too promising from our point of view. His Letters to a Lady inclined to enter the Church of Rome describe 'the attitude of a high Anglican towards Catholicism'.

Two of Law’s books - A Serious Call to a Devout and Holy Life (1728), together with its predecessor, A Practical Treatise Upon Christian Perfection (1726), deeply influenced the major players in the great Evangelical revival -  John and Charles Wesley, George Whitefield, Henry Venn, Thomas Scott and Thomas Adam.  The Serious Call affected others quite as deeply. Samuel Johnson, Gibbon, Lord Lyttelton and Bishop Home all spoke enthusiastically of its merits; and it is still the only work by which its author is popularly known. Its supporters state that ‘it has high merits of style, being lucid and pointed to a degree’.  So up to now we have a man who was 'religious' and not in any sense spiritual.  And it is interesting to note who he appealed to.   People who were influenced by Law’s works include George Cheyne the physician and Archibald Hutcheson, MP for Hastings!

But something happened to him later in life and he appears to have mellowed.

Though the least popular, by far the most interesting and original of all Law's works are those which he wrote in his later years, after he had become an enthusiastic admirer of Jacob Boehme. From his earliest years, he had 'been deeply impressed with the piety, beauty and thoughtfulness of the writings of the Christian mystics'. However, it was not till after his accidental meeting with the works of Boehme, about 1734, that pronounced spirituality appeared in his works.

Thus we might surmise that somehow he started to see things differently.  The only clues to what changed him come in this extract from Wikipedia

"Law by 1740 retired to Kings Cliffe, where he had inherited from his father a house and a small property. There he was joined by Elizabeth Hutcheson, the rich widow of his old friend (who recommended on his death-bed that she place herself under Law's spiritual guidance) and Hester Gibbon, sister to his late pupil. For the next 21 years, the trio devoted themselves to worship, study and charity, until Law died on 9 April 1761"

So perhaps in the end it was the existence of a safe house [reducing threats] and love!

Other books by Law