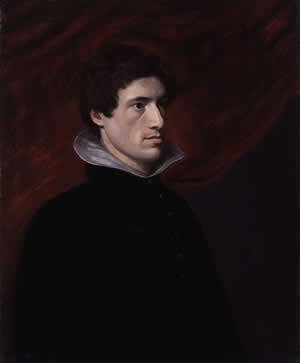 Charles Lamb (10 February 1775 – 27 December 1834) was an English essayist and poet, best known for his Essays of Elia and for the children's book Tales from Shakespeare, which he produced with his sister, Mary Lamb (1764–1847). The book contains prose summaries of some of Shakespeare's works. Lamb's poetry includes 'Blank Verse' a collection he wrote with Charles Lloyd, the mentally unstable son of the founder of Lloyd's Bank. Lamb's most famous poem is possibly The Old Familiar Faces. Like most of Lamb's poems, it is “unabashedly sentimental”, and perhaps for this reason it is still remembered and widely read today.

Lamb was however a much more talented prose stylist than poet. William Wordsworth wrote in1815 that Lamb "writes prose exquisitely".

Lamb was born in London and was the youngest child of 7 children, 4 of whom died in infancy. His childhood was a mixture of happiness and appalling trauma. The happiness came from his sister Mary, who was 11 years older than him, his Aunt Hetty and his grandmother Mrs Field. His grandmother was in sole charge as housekeeper of a large country house and he spent many happy days there. 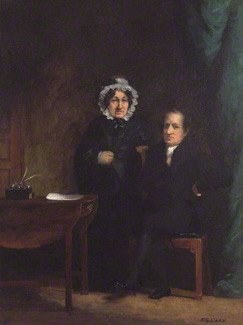 After contracting smallpox during his early years, he underwent a long period of convalescence and received home schooling from a Mrs. Reynolds, who appears to have also been a source of happiness.

But in October 1782, Lamb was enrolled in Christ's Hospital, a charity boarding school and the trauma began. Christ's Hospital was a traditional bleak English boarding school. Many students later wrote of the terrible violence they suffered there. The upper master of the school from 1778 to 1799 was Reverend James Boyer, a man renowned for his unpredictable and capricious temper and brutality. In one famous story Boyer was said to have knocked one of Leigh Hunt's teeth out by throwing a copy of Homer at him from across the room. When things got really bad, Charles was at least able to escape to his home which was not far distant, others were not so lucky. 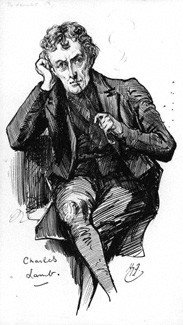 Schools in those days persecuted left handers and Charles Lamb, like Lewis Carroll appears to have been a left hander. The forced use of his right hand gave him the characteristic stutter - an "inconquerable [sic] impediment" in his speech which [possibly thankfully] served to deprive him of any further education at university. Lamb left school at fourteen and started work. On 5 April 1792 he went to work for the British East India Company. Charles continued to work there for 25 years, until his retirement.

What inspired Lamb? In 1792, Lamb fell in love with a young woman named Ann Simmons. Lamb spent years attempting to woo her. He wrote essays about her and "Dream Children," "New Year's Eve," and several others, speak of the many years that Lamb spent pursuing his love. Miss Simmons eventually went on to marry a silversmith, thus years of unrequited love were followed by grief. In 1819, at age 44, Lamb fell in love with an actress, Fanny Kelly, of Covent Garden, and proposed marriage. She refused him. He died a bachelor. 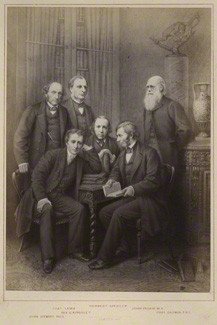 So unrequited love had a hand, but the principal driver to Charles Lamb was that he had manic depression. Both Charles and his sister Mary suffered periods of mental illness. Charles spent six weeks in a psychiatric hospital during 1795. It was during these times of acute mental illness that Lamb wrote poetry. Although the psychological trauma of his schooling and his failed love affairs appear to have exacerbated Charles's illness, the predisposition was inherited. On 22 September 1796, Mary, "worn down to a state of extreme nervous misery by attention to needlework by day and to her mother at night," was seized with acute mania and stabbed her mother to the heart with a table knife. A jury returned a verdict of 'Lunacy'. Lamb used a large part of his relatively meagre income to keep his beloved sister in a private 'madhouse' in Islington. When their father died, Mary came to live with Charles again.

Despite Lamb's bouts of depression and a gradual decline into alcoholism, both he and his sister enjoyed “an active and rich social life”. Their London quarters became a kind of weekly salon for many of the most outstanding theatrical and literary figures of the day. Lamb was at school with Samuel Taylor Coleridge, and counted Coleridge as perhaps his closest, and certainly his oldest, friend.

Lamb's first publication was in 1796, when four sonnets by "Mr. Charles Lamb of the India House" appeared in Coleridge's Poems on Various Subjects. In 1797 he contributed additional blank verse to the second edition, and met the Wordsworths, William and Dorothy, on his short summer holiday with Coleridge at Nether Stowey. 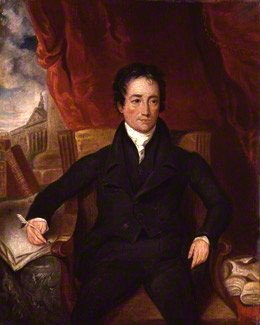 He became a lifelong friend of William. In London, Lamb became friends with Percy Bysshe Shelley, William Hazlitt, and Leigh Hunt. So he was not without love and companionship of a kind.

Charles Lamb died of a streptococcal infection, aged 59, on 27 December 1834, just a few months after Coleridge.

Anne Fadiman has said: "... because of his notoriously quirky, even bizarre, style, Lamb has been more of a cult favourite than an author with mass popular or scholarly appeal... but .. I for one do not understand why more ... readers are not clamouring for his company”.