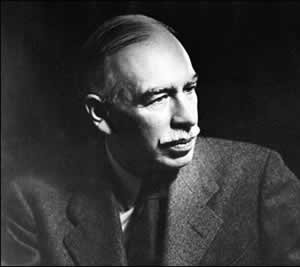 John Maynard Keynes, 1st Baron Keynes, CB, FBA (1883 – 1946) was a British economist whose ideas fundamentally affected the theory and practice of modern economics, and had a profound effect on the economic policy of a number of governments. His ideas are given the generic name 'Keynesian economics'.

In simplistic terms the gist of his theory was that leaving the free market to solve economic problems and downturns in business cycles and economies in general, did not work. Keynes instead argued that aggregate demand determined the overall level of economic activity, and that inadequate aggregate demand could lead to prolonged periods of high unemployment.

If the aggregate demand was low and the demand from consumers and businesses was low, then the demand had to come from government and the government would need to spend in order to boost demand. The spending of government could be on borrowed money as long as it was invested in infrastructure projects that thereby helped businesses recover. Again, put simply, this was treating government like just another business that needed to invest in services that were 'purchased' by private enterprise - used to create income which was then taxed.  Much as a hire car company will buy cars in order to rent them to consumers, the government invested in services that could be used by businesses and individuals for which they paid tax [sadly the correlation between tax and service has been lost long ago]. 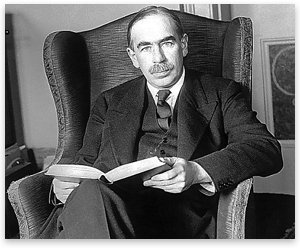 During the years when the economies of Europe and America were strong [principally the Reagan Thatcher years], Keynesian economics was largely forgotten. The advent of the global financial crisis in the early 2000s, however, caused a new interest in Keynesian thought. Keynesian economics provided the theoretical underpinning for economic policies undertaken in response to the crisis by President George W. Bush of the United States, and the Chancellor and then Prime Minister Gordon Brown of the United Kingdom, however, in neither case was Keynesian policy actually being followed.

Both governments appear to have taken the principle of spending without the understanding that the spending needs to be on services needed by the rest of the economy. Spending on war, on government officials without any real role, or on government officials whose job it is to monitor businesses and not help them, simply adds to the depressive effect. Thus the only real time that Keynesian economics has actually been used was in the '50s and '60s, when it appeared to be remarkably effective. 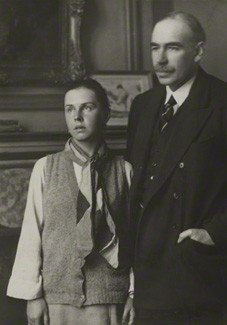 Despite the fact his principles seem to be misunderstood, Keynes has been described by The Economist as "Britain’s most famous 20th-century economist."

In addition to being an economist, Keynes was also a civil servant, a director of the British Eugenics Society, a director of the Bank of England, a patron of the arts and an art collector, a part of the Bloomsbury Group of intellectuals, an advisor to several charitable trusts, a writer, a philosopher, a private investor, and a farmer.

What provided his inspiration?

In the first place, he was a sick man with the sorts of illnesses that have produced many inspirational moments in others.  Alexander Cairncross, [his biographer] stated that: " In his first few years Maynard was a sickly child, suffering to begin with from frequent attacks of diarrhoea and thereafter from feverishness... In the summer of 1889 he had an attack of rheumatic fever and a few months later he had to give up attending his kindergarten for a time, suffering from what was diagnosed as St Vitus's dance."

And he continued to have recurrent bouts of very severe illness.  His wife, Lydia Lopokova, looked after him when he became ill in 1936: 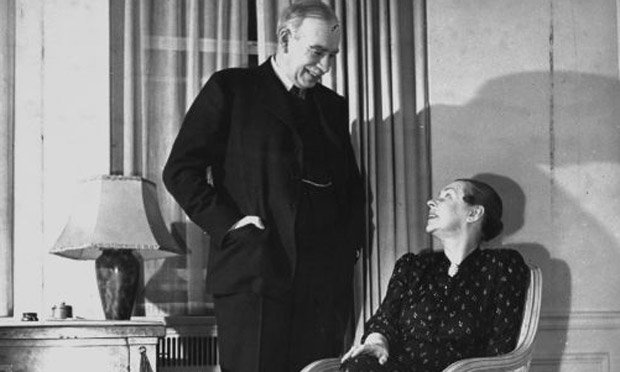 John Maynard Keynes and Lydia Lopokova.  … Keynes and his wife in 1944.

"From the summer of 1936 Keynes was affected by a prolonged spell of illness, beginning with chest pains and breathlessness. After a complete collapse in May 1937 heart trouble was diagnosed and a complete rest prescribed. He gradually improved, and was writing occasional letters and even the odd article by July 1937. But when he returned to London and Tilton in late September he still needed Lydia's constant care to prevent over-excitement and overwork.

But we also have another source of inspiration in Lydia herself - so again LOVE played a big part.

They first fell in love at the end of 1921, when Lopokova was still a star ballerina with Diaghilev's Ballets Russes. At that point, Keynes had risked only a few experimental episodes with women, ….. Like many men of his generation whose early experiences were homosexual, he didn't discount the idea of marriage and children, but even so he was disarmed, even terrified, by the power of his feelings for Lopokova. It wasn't just that she was a woman – she was also so alien. As the daughter of a Russian peasant and an itinerant, erratically educated dancer she had little contact with Keynes's own world, whose fixed points were Eton, Cambridge and Bloomsbury.  But Keynes and Lopokova were both exceptional oddities: he possessed a rare intellectual curiosity and subtlety of imagination; she had an intuitive comic charm and intelligence. Lank and Lydochka, as they called each other, were enchanted by each other's differences. And while Duncan Grant initially wrote to Vanessa Bell that the idea of them as a couple "beggars my imagination", they married in 1925 and that marriage turned into a long, loyal and happy one.

As for the sex – references in the correspondence to … their vivid "fluctuations" in bed, indicate that, despite early conflicts over Keynes's desire to maintain a male lover, they made each other very happy. Keynes never stopped desiring beautiful men, but he was physically beguiled by Lopokova and settled into a very uxorious husband. Certainly they wanted children, and even before their marriage Keynes had anticipated them "starting their work on population", and imagining the "poet" they would produce together. If he was disappointed by their failure to become parents, Lopokova was temporarily very depressed by it.

So grief and LOVE - a heady combination.

His work is testimony to his inspiration, but he did have one minor visual spiritual experience caused by fever which I have included.

It may be of interest to know that Isaac Newton's occult papers, some of which are now published online, were kept hidden for centuries. When these mysterious diaries resurfaced, about half of them were purchased in 1936 by  John Maynard Keynes ; another large portion was collected by Abraham Shalom Yahuda (1877-1951). You can read details about the 1936 Sotheby's auction of Newton's 'Portsmouth Papers' here and here.