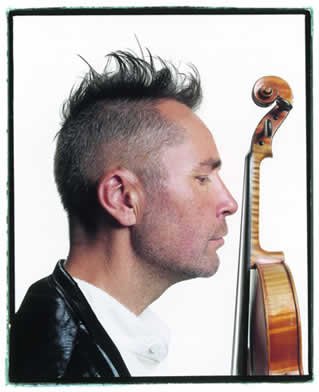 Nigel Kennedy (born 28 December 1956) is a British-born violinist and violist.

He made his early career in the classical field, and he has performed and recorded most of the major violin concerti.

Later, however, he branched out and his performances and records now include jazz, klezmer, and adaptations of pop songs.

Not surprisingly Nigel was a boy prodigy. He was a pupil at the Yehudi Menuhin School of Music, and later studied at the Juilliard School in New York with Dorothy DeLay.

At the age of 16, Kennedy was invited by Stéphane Grappelli to appear with him at New York's Carnegie Hall.

He made his recording debut in 1984 with Elgar's Violin Concerto. Kennedy's recording of Vivaldi's The Four Seasons with the English Chamber Orchestra in 1989 sold over 2 million copies and earned a place as one of the best-selling classical works ever.  He has since recorded numerous classical pieces all with the same level of success.  He has given numerous performances for The Prince's Trust, the Royal Variety Performance and private performances at St. James's Palace and Buckingham Palace.

He is, however, an unconventional little soul and began to branch out with a repertoire that started to include jazz and 'pop' music.  He has recorded  a cover of Jimi Hendrix's "Fire" and adapted Jimi Hendrix's music for 'The Kennedy Experience',  an extended instrumental work where each movement is a classical interpretation of a Hendrix song.  He also produced a violin based version of  Riders on the Storm by the Doors and other orchestral versions of the Doors songs - "Strange Days", "LA Woman", and "The End".  He has also worked with The Who, Kate Bush, Sarah Brightman, and the Polish jazz band Kroke.

In late 2005, Kennedy went to New York to record his first album for the jazz label Blue Note Sessions. Other musicians on the album were Ron Carter on double bass, Jack DeJohnette on drums; and saxophonist Joe Lovano. Kennedy has since stated that "from now on, at least 50 per cent of my endeavour is going to be in the jazz field".  And the reason jazz interests him?  Because he can let go to inspiration – entirely let go to inspiration, just let the spirit work through him.

When not touring, Kennedy divides his time between residences in Malvern, Worcestershire (where his former girlfriend and son Sark live); and Kraków where he lives with his Polish second wife, Agnieszka.

It is also relevant to state that according to Wikipedia “Kennedy has acknowledged regularly smoking cannabis in order to aid his creativity”.

This was not how he got the out-of-body experience in the observation, however, which is fascinating.