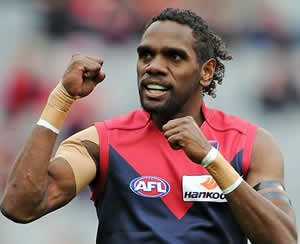 Jurrah is also known as "Jungarrayi", an initiated member of the Warlpiri people who are based in Yuendumu, a small and remote Indigenous Australian community 300 km north-west of Alice Springs in the Northern Territory.

He is the first indigenous person from a remote community in Central Australia to play senior football in the Australian Football League.

But he is a very very good footballer and the emotion is key to the inspiration.