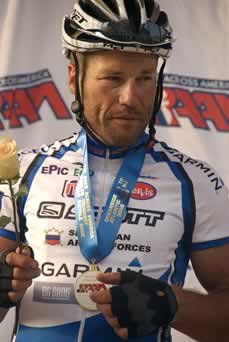 Jure Robic (1965 -  2010) was a Slovenian cyclist and a soldier in the Slovenian Army. He died on 24 September 2010 in a head-on collision with a car while descending on a narrow mountain forest road in Plavški Rovt near Jesenice.

Robic was renowned for pushing himself to extreme mental breakdown during endurance races. He was laboratory tested, and his abilities to produce power and to transport oxygen were found to be parallel to those of other top ultra-endurance athletes worldwide. During the 2004 Race Across America, it was reported that he had only eight hours of sleep during his eight-day, 2,958.5-mile (4,761.2 km) ride across the United States.

From 1988 to 1994 Jure was part of the Slovenian Cycling National Team and he was also a National road champion. In his career he won more than 100 races and has been on the podium at least 150 times. He was also a winner of Maraton Franja, Juriš na Vršic.