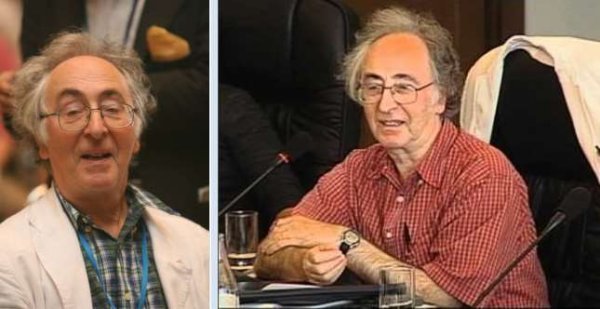 Brian David Josephson, FRS (born 4 January 1940), is a Welsh theoretical physicist and professor emeritus of physics at the University of Cambridge. Best known for his pioneering work on superconductivity and quantum tunnelling, he was awarded the Nobel Prize in Physics in 1973 for his prediction of the Josephson effect, made in 1962 when he was a 22-year-old PhD student at Cambridge. He shared the prize with physicists Leo Esaki and Ivar Giaever, who jointly received half the award for their own work on quantum tunnelling.

Professor Josephson has spent his academic career as a member of the Theory of Condensed Matter group at Cambridge's Cavendish Laboratory. He has been a fellow of Trinity College since 1962, and served as professor of physics from 1974 until 2007. 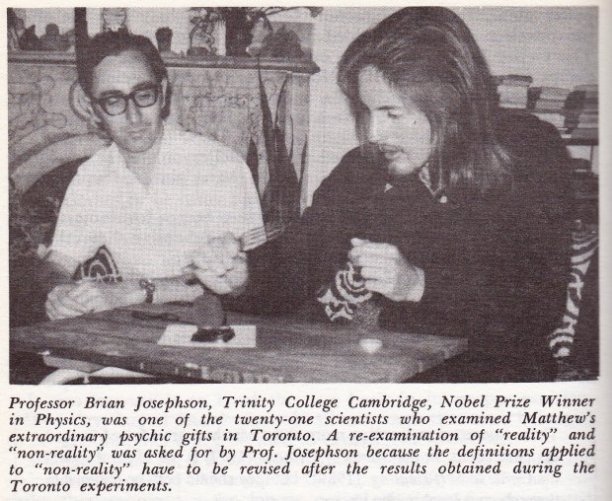 He is one of the few scientists to argue that para-psychological phenomena (telepathy, psychokinesis apporting and other such events) are real.

It is worth adding that Trinity College has a history of being involved in research into the so called ‘paranormal’.  Several presidents of the Society for Psychical Research had been fellows of Trinity, and the Perrott-Warrick Fund, set up in Trinity in 1937 to fund parapsychology research, is still administered by the college.

Professor Josephson became involved in the mid-seventies with a group of physicists associated with the Lawrence Berkeley Laboratory at the University of California. They called themselves the Fundamental Fysiks Group.  The American government was financing research at Stanford Research Institute (SRI) into telepathy – and physicists able to understand it found themselves in demand. The Fundamental Fysiks Group got involved and used ideas from quantum physics, particularly Bell's theorem and quantum entanglement, to explore issues such as action at a distance, clairvoyance, precognition, remote viewing and psychokinesis.  The results were sufficiently convincing and real to fire a life long interest in Professor Josephson.

He  co-organized a symposium on consciousness at Cambridge in 1978, publishing the proceedings as Consciousness and the Physical World (1980), with neuroscientist V. S. Ramachandran. A conference on "Science and Consciousness" followed a year later in Cordoba, Spain, attended by physicists and Jungian psychoanalysts, and addressed by Josephson, Fritjof Capra and David Bohm (1917–1992).

Winning the Nobel Prize in 1973 gave him the freedom to work in less orthodox areas, and express his views openly.  And he had no hesitation in talking about higher states of consciousness during science conferences, “to the irritation of fellow scientists”.  In 1974 he angered scientists during a colloquium of molecular and cellular biologists in Versailles by inviting them to read the Bhagavad Gita.

"Nothing forces us," one scientist shouted at him, "to listen to your wild speculations." Biophysicist Henri Atlan wrote that the session ended in uproar.  How wonderful.

In the early 1970s, Professor Josephson took up transcendental meditation and in 1979 took up a more advanced form of TM, known as the TM-Sidhi program.  He later set up the Mind–Matter Unification Project at the Cavendish to explore the idea of intelligence in nature, the relationship between quantum mechanics and consciousness, and the synthesis of science and Eastern mysticism.  Professor Josephson [bless his little cotton socks] has continued undaunted in his research and even had the temerity to state that meditation could lead to mystical and scientific insights.

In 2002 he told Physics World: "Future science will consider quantum mechanics as the phenomenology of particular kinds of organised complex system. Quantum entanglement would be one manifestation of such organisation, paranormal phenomena another."

So as we can see Professor Josephson is a brave man, daring to suggest the earth is round when surrounded by scientists who continue to insist it is flat.  I particularly liked the following example of the Flat earth scientists

In 2004 Josephson criticized an experiment by the Committee for Skeptical Inquiry to test claims by Russian schoolgirl Natasha Demkina that she could see inside people's bodies using a special kind of vision. The experiment involved her being asked to match six people to their confirmed medical conditions (plus one with none); to pass the test she had to make five correct matches, but made only four.

Only four eh?  My goodness what a failure that was.

I am pleased to say that Keith Rennolis, professor of applied statistics at the University of Greenwich, supported Josephson's position.

Professor Josephson should however, think himself lucky.  In days gone by, like Kepler or Newton he would have run the risk of being burnt at the stake by the Institutionalised Church for proposing the sort of views he expresses today – Kepler’s Mum was tried for witchcraft.  These days all he faces is criticism from a few easily forgotten left brainers.