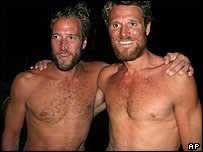 Ben Fogle is a television presenter whose programmes include Country File and Animal park. James Cracknell won gold medals for rowing at the 2000 and 2004 Olympics, and writes regularly for the Daily Telegraph.

They got together in order to compete in the Atlantic Rowing Race.  They thought they knew what awaited them: nearly three thousand miles of empty ocean, stormy weather and colossal physical stress. But their epic journey would become at times, ‘a living hell’ that tested the strength of every fibre of their being. Yet, forty-seven days later, James and Ben were the first pair to cross the finishing line - overtaking one of the four-man teams in the process - becoming the first British pair ever to win the race. They pushed themselves physically, psychologically and emotionally to the limit. They survived without water rations for two days, lost the few clothes they had in a freak wave, capsized, hallucinated, wept, fought, played games, grew beards, nursed blisters and rowed 2,930 miles. They will never be the same again. 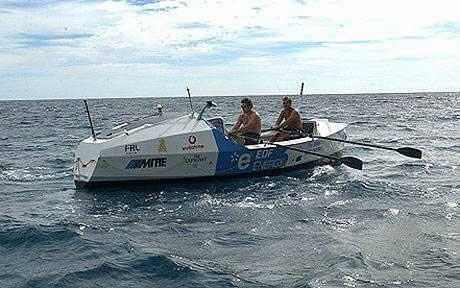 “This is the autobiographical account of James Cracknell and Ben Fogle's crossing in the Atlantic Rowing Race 2005/06 from the Canary Islands to Antigua. Both of them alternate in telling the story and sometimes recount the same incidents from their own very different perspectives.

They seemed to enter the race in a fit of absent mindedness and their preparations were truly shambolic to the extent that the organisers came within a hair's breadth of refusing them permission to participate. Ben Fogle hadn't even properly learnt to row beforehand!

Oh yes, and in addition to rowing 3,000 miles they also had to endure the worst weather that the bi-annual race had ever experienced. However, this amateurishness greatly improves the story. What prevents it falling into a story of public school derring do is that gradually you see the strengths and transferable skills that both characters have developed in other spheres coming very much to the fore and pulling them through to become the first pair to cross the finishing line.

So James Cracknell's intense competitiveness provides immense drive and motivation whilst Ben Fogle's good natured doggedness offers a striking contract to Cracknell. Despite great stretches when not a lot happens other than lots and lots of rowing (interspersed with a few brief moments of dangerous high drama) the book never fails to engage.

There was a surprising twist before the end when the motivation of both characters changed. Both frankly, but kindly, relate the tensions that invariably arose on board. I think this is one of the book's strengths - the way they honestly project both their personalities, warts and all, to the extent that you feel you know and like them both by the time they reach Antigua.

The ending is affecting as they bring out how the race helped clarified life changing decisions for them both and revealed their personalities to themselves. This book will appeal to rowing enthusiasts, fans of either author and anyone interested in endurance events, motivational stories or team work under pressure”.