Ikkyū (一休宗純 Ikkyū Sōjun, 1394–1481) (self-named: "Crazy Cloud") was a Japanese Zen Buddhist monk, musical composer and poet. He is one of the most significant (and eccentric) figures in Zen history. To Japanese children, he is a folk hero, mischievous and always out-smarting his teachers, to Japanese adults he is known as having had a great impact on the infusion of Japanese art and literature with Zen attitudes and ideals.

In Rinzai Zen tradition, he is both heretic and saint.

Ikkyū’ was a follower of the spiritual path and in 1418 he achieved enlightenment.

In 1418 Ikkyū was given Case 15 of the Mumonkan, Tozan's 60 Blows. One day a band of blind singers performed at the temple and Ikkyū penetrated his koan while engrossed in the music. In recognition of his understanding Kaso gave Shuken the Dharma name Ikkyu, which roughly means One Pause. In 1420 Ikkyū was meditating in a boat on Lake Biwa when the sound of a crow sparked satori. Kaso confirmed this great enlightenment and granted Ikkyu inka.

Satori (悟り) (Chinese: 悟; pinyin: wù; Korean: 오 o; Vietnamese: ngộ) is a Japanese Buddhist term, which literally translated means "awakening, comprehension; understanding". It is derived from the Japanese verb satoru.  In the Zen Buddhist tradition, satori refers to the experience of kenshō, "seeing into one's true nature". Ken means "seeing," shō means "nature" or "essence."  Thus if we align this with the terms used on the site, Ikkyu had moved into the first stages of ecstasy, moksha and annihilation – the three last stages of the spiritual path.  In Zen Buddhism it requires you to ‘know yourself’, in both the sense of ecstasy and in the activity of comprehension.  It appears that Ikkyu achieved ecstasy, which means he might be better described as a mystic poet.

But what is interesting about Ikkyū is how he achieved his spiritual understanding and experiences. 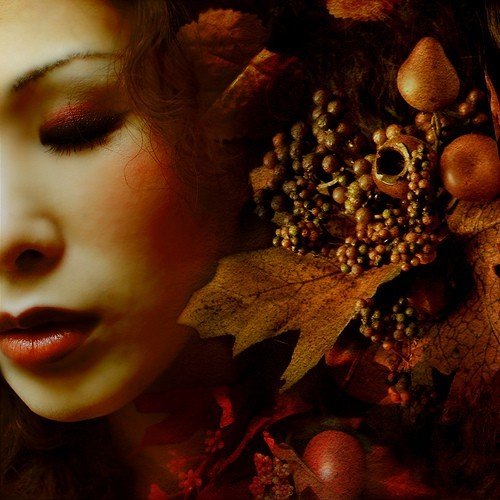 From all the descriptions, Ikkyū used meditation combined with befuddling as one method – taught him by his various teachers, but what made him a heretic to many Buddhists was that he used all the sexual techniques to achieve enlightenment from Making love, to Sex magick to Sexual stimulation to Peaking.

Ikkyū was among the few Zen priests who argued that his enlightenment was deepened by consorting with pavilion girls. He entered Geisha houses wearing his black robes, since for him sexual intercourse was a religious rite. At the same time he warned Zen against its own bureaucratic politicising. Usually he is referred to as one of the main influences on the Fuke sect [sic] of Rinzai zen, as he is one of the most famous ‘flute player’ mendicants of the medieval times of Japan. The piece "Murasaki Reibo" is attributed to him. He is credited as one of the great influences on the Japanese ‘tea ceremony’, and renowned as one of medieval Japan's greatest calligraphers and sumi-e artists.

Ikkyū wrote in Kanbun style classical Chinese, which was employed by many contemporary Japanese authors. His verse is immediate, poignant, insightful, and at times moving. 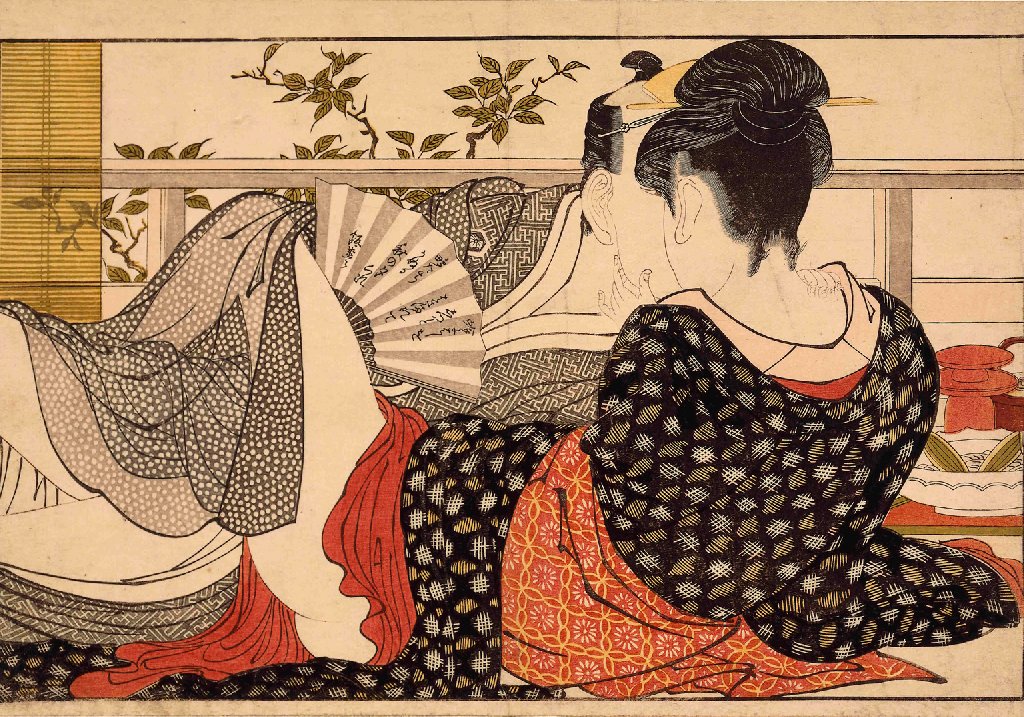 Ikkyū was born in 1394 in a small suburb of Kyoto. It is believed that he was the son of Emperor Go-Komatsu and a low-ranking court noblewoman. His mother was forced to flee to Saga, Japan, where Ikkyū was raised by servants.

At the age of five, Ikkyu was separated from his mother and placed in a Rinzai Zen temple in Kyoto called Ankoku-ji, as an initiate. The temple masters taught him Chinese culture and language as part of the curriculum, a method termed Gozan Zen. He was given the name Shuken, and learned about Chinese poetry, art and literature.

When Ikkyū turned thirteen he entered Kennin-ji in Kyoto to study Zen under a well known priest by the name of Botetsu. Here Ikkyū began to write poetry that was frequently  non-traditional in form.

He was openly critical of Kennin-ji's leadership in his poetry, disheartened with the 'social stratum and lack of zazen practice' he saw around him.

In 1410, at the age of sixteen, Ikkyū left Kennin-ji and entered the temple Mibu-dera, where an abbot named Seiso was in residence.

He did not stay long, and soon found himself at Saikin-ji in the Lake Biwa region where he was the sole student of an abbot named Ken'o.

It seems that here Ikkyū finally found a master that taught true Rinzai Zen as Ikkyū saw it. These days Rinzai Zen bears no relationship to the Rinzai Zen taught in those days.  It was somewhat similar to the practises used in alchemy, and involved men and women.  At the time it was flourishing, Rinzai contributed to a great flowering of Japanese cultural arts such as calligraphy, painting, literature, tea ceremony, Japanese garden design, architecture and even 'martial arts' [in its spiritual form]. 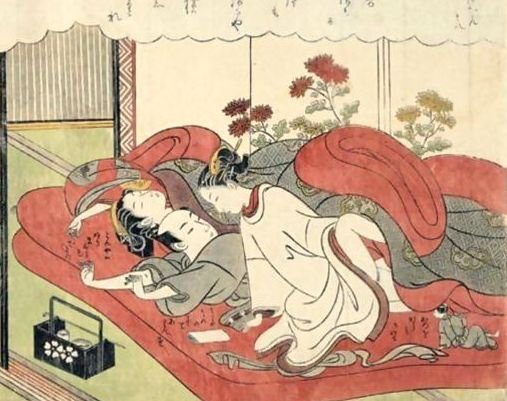 Ken'o was sporadic in his teaching style and was a strong believer in the supremacy of zazen. In 1414, when Ikkyū was 21, Keno died. Ikkyū performed funeral rites and fasted for seven days. In despair Ikkyu tried to commit suicide by drowning himself in Lake Biwa, but was talked out of it from the shore by a servant of his mother.

Ikkyū soon found a new teacher in a master named Kaso at Zenko-an, a branch temple of Daitoku-ji. Kaso was much like Ken'o in his style. For years he worked hard on assigned koans and made dolls for a local merchant in Kyoto.

After his enlightenment, Ikkyū came up against the jealousy of Yoso, a more senior student who eventually came to run the monastery. In Ikkyū's poems, Yoso appears as a character unhealthily obsessed with material goods, who sold Zen to increase the prosperity of the temple.

Ikkyu could sometimes be a troublemaker. Known to drink in excess, he would often upset Kaso with his remarks and actions to guests. In response, Kaso gave inka to Yoso and made him Dharma heir. Ikkyu quickly left the temple and lived many years as 'a vagabond'. He was not alone, however, as he had a regular circle of notable artists and poets from that era. Around this time, he established a relationship with a blind singer Mori who became the love of his later life.

Ikkyu worked to live Zen outside of formal religious institutions. However, the Ōnin War had reduced Daitokuji to ashes, and Ikkyū was elected abbot late in life, a role he reluctantly took on. This firmly placed him in one of the most important Zen lineages.

In 1481, Ikkyū died at the age of eighty-seven from acute ague. 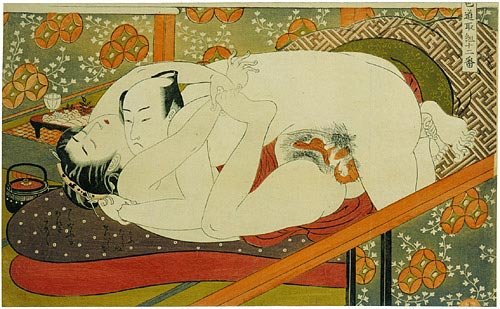 Please note the pictures I have chosen for Ikkyu are merely those I liked.

They are however, all relevant.