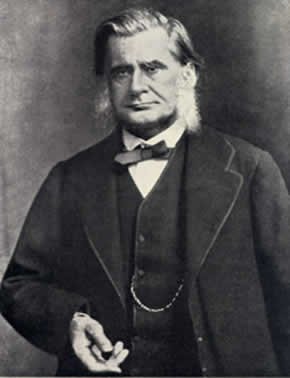 Thomas Henry Huxley PC FRS (1825 –1895) was an English biologist known as "Darwin's Bulldog" for his advocacy of Charles Darwin's theory of evolution.  Aldous Huxley was one of his grandsons.

Huxley's famous 1860 debate with Samuel Wilberforce was a key moment in the wider acceptance of evolution, and in his own career.   Huxley had been planning to leave Oxford on the previous day, but, after an encounter with Robert Chambers, the author of Vestiges, he changed his mind and decided to join the debate. Wilberforce was coached by Richard Owen, against whom Huxley also debated whether humans were closely related to apes.  Huxley was slow to accept some of Darwin's ideas, and was undecided about natural selection, but despite this, he was wholehearted in his public support of Darwin.

Huxley had little formal schooling and taught himself almost everything he knew. He became perhaps the finest comparative anatomist of the latter 19th century. He worked on invertebrates, clarifying relationships between groups previously little understood. Later, he worked on vertebrates, especially on the relationship between apes and humans. After comparing Archaeopteryx with Compsognathus, he concluded that birds evolved from small carnivorous dinosaurs, a theory widely accepted today.

The tendency has been for his fine anatomical work to be overshadowed by his energetic and controversial activity in favour of evolution, and by his extensive public work on scientific education, both of which had significant effects on society in Britain and elsewhere.

Few in the UK, educated nowadays in secular schools with subjects ranging from politics to art, may realise how important his influence was in producing the system we enjoy  today.   Elsewhere on this site I am critical of the way education has evolved in recent times, but at the time Huxley lived, education was in a far worse state.  Practically the whole education system, at that time, was dedicated to the indoctrination, by fear, in belief systems.

Huxley said  "I will never be a party to enabling the State to sweep the children of this country into denominational schools".

And through him, for a brief period, indoctrination and denominational schooling was squashed.  When I was at school there was no indoctrination, no ‘Bible or Q’ran bashing’, there was a curriculum and a set of standards and a defined course of education and it all started with Huxley.  In primary schooling, he advocated a wide range of disciplines, a set of subjects still taught today: reading, writing, arithmetic, art, science, music, etc. In secondary education he recommended two years of basic liberal studies followed by two years of some upper-division work, focusing on a more specific area of study.

Huxley's interest in education went still further than school and university classrooms; he made a great effort to reach interested adults of all kinds. There were his lecture courses for working men, many of which were published afterwards, and there was the use he made of journalism to reach out to the literate public.

His opposition of course, in both his support for evolution and his ideas for schooling, came from religious institutions and he spent most of his life fighting against the more extreme versions of religious tradition.  In 1869, Huxley coined the term 'agnostic' to describe his own views on theology, a term whose use has continued to the present day. 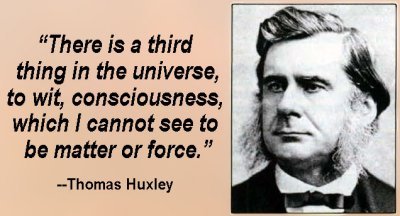 He was against religious dogma, but not against spirituality and this is key.  Look at his observations and they are full of a sense of the spiritual.  This may seem at odds with ideas of evolution, but this is not the case.  Institutionalised Religion was against evolution, but spiritually gifted people have never been – look at the observations and you will see – thousands upon thousands who saw the spiral of evolution as it gently swung out over time.

Despite being agnostic, Huxley supported the reading of the Bible in schools. This may also seem out of step with his convictions, but he believed that the Bible's significant moral teachings and superb use of language were relevant to English life.

"I do not advocate burning your ship to get rid of the cockroaches".

Perhaps one of the saddest things is that denominational schools have started to sneak back in the UK  with all their indoctrination of the young – Huxley would have wept.  He was a lifelong and determined opponent of almost all organized religion throughout his life, especially the "Roman Church... carefully calculated for the destruction of all that is highest in the moral nature, in the intellectual freedom, and in the political freedom of mankind”  During his life, and especially in the last ten years after retirement, Huxley wrote on many issues relating to the humanities.

It may be right to see Huxley's life and work as contributing to the secularisation of British society which gradually occurred over the following century.  One of his best known works in this area is Evolution and Ethics, in which Huxley dismisses religion as a source of moral authority.   Like Descartes he believed that the mental characteristics of man are as much a product of evolution as the physical aspects. Thus, our emotions, our intellect, our tendency to prefer living in groups and spend resources on raising our young are part and parcel of our evolution, and therefore inherited.

Despite this, the details of our values and ethics are not inherited: they are partly determined by our culture, and partly chosen by ourselves. Morality and duty are often at war with natural instincts; ethics cannot be derived from the struggle for existence. It is therefore our responsibility to make ethical choices

"Of moral purpose I see not a trace in nature. That is an article of exclusively human manufacture."

Huxley also thought that reincarnation was a plausible idea and discussed it in Evolution and Ethics and other Essays.

There was so much achievement in his life that it seems extraordinary that he was given no award, by the British state, until late in life. In this he did better than Darwin, who got no award of any kind from the state. (Darwin's proposed knighthood was vetoed by ecclesiastical advisors, including Wilberforce). Perhaps Huxley had commented too often on his dislike of honours, or perhaps his many assaults on the traditional beliefs of organised religion made enemies in the establishment.

If you wish to read more about this wonderful man the Wikipedia entry is very good.

Where did he get his inspiration?  Well he seems to have inherited the right genes – his father was mathematically inclined, and he himself was artistic [see drawing ].  He was also a very sensitive caring man, and being sensitive was easily hurt or shocked.

As a young apprentice to a medical practitioner, aged thirteen or fourteen, Huxley was taken to watch a post-mortem dissection. Afterwards he sank into a ‘deep lethargy caused by the  emotional shock’. He recuperated on a farm, looking thin and ill.

He was lucky that he did not have  to suffer the  ‘education’ meted out in the days when he was a child.  It might well have killed him.  It was his observation of what happened to others that prompted him to seek reform. 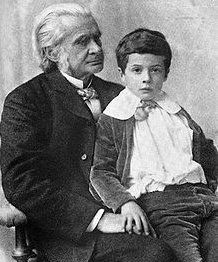 He also seems to have been a person with the capacity for great love – of his family and his fellow man.

“Huxley's relationships with his relatives and children were genial by the standards of the day—so long as they lived their lives in an honourable manner, which some did not. After his mother, his eldest sister Lizzie was the most important person in his life until his own marriage. He remained on good terms with his children, more than can be said of many Victorian fathers. One surviving letter to his eldest daughter Jessie is full of affection” 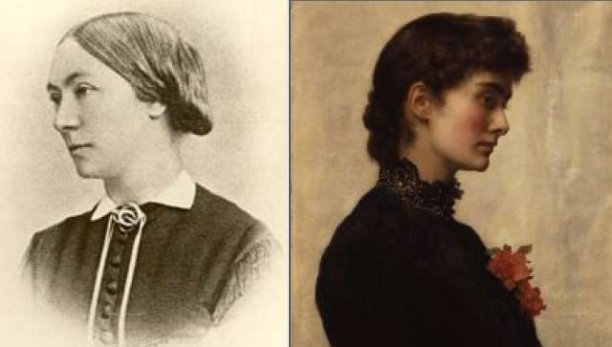 Huxley's wife Henrietta (above) and his daughter Marion (right).

Biographers have sometimes noted the occurrence of mental illness in the Huxley family. And indeed many of his relatives suffered from depression and  "extreme mental anxiety".  But this is not mental illness, this is high or if you prefer extreme sensitivity.  His brother James was, at 55, "as near mad as any sane man can be", which of course is meaningless.  Huxley himself suffered depression whilst he was on the third voyage of HMS Rattlesnake in 1848. But depression is extreme sadness, not mental illness.  With true mental illness you cannot function.  All his family functioned, some may say a darn sight better than those who were judging them.

But it does lend credence to the view that this whole family was genetically gifted to be spiritual and inspired, a fact which tends to be born out when we see later generations.