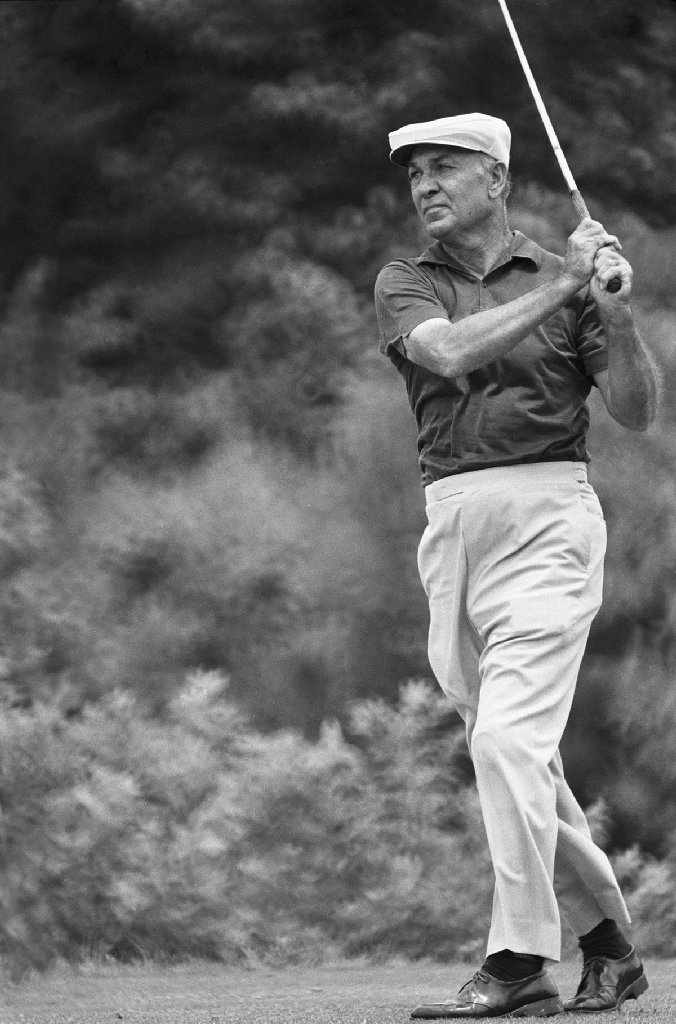 William Ben Hogan (August 13, 1912 – July 25, 1997) was an American professional golfer, generally considered one of the greatest players in the history of the game.

Hogan is notable for his profound influence on golf swing theory, but he is perhaps better known as one of the greatest ball strikers ever to have played golf.

Although he had a formidable record as a tournament winner, it is this aspect of Hogan which mostly underpins his modern reputation.

Hogan was known to practice almost obsessively.  He himself said, "You hear stories about me beating my brains out practicing, but... I was enjoying myself. I couldn't wait to get up in the morning, so I could hit balls. When I'm hitting the ball where I want, hard and crisply, it's a joy that very few people experience."

His nine career professional major championships tie him with Gary Player for fourth all-time, trailing only Jack Nicklaus , Tiger Woods  and Walter Hagen . He is one of only five golfers to have won all four major championships currently open to professionals (the Masters Tournament, The Open (despite only playing once), the U.S. Open, and the PGA Championship). The other four are Nicklaus, Woods, Player, and Gene Sarazen.

Why is he on the site?  He recovered from a devastating, career-threatening, accident by the use of mind over matter.  In effect he willed himself better. Between the years of 1938 through 1959, Hogan won 63 professional golf tournaments despite his career being interrupted in its prime by World War II and this near-fatal car accident. 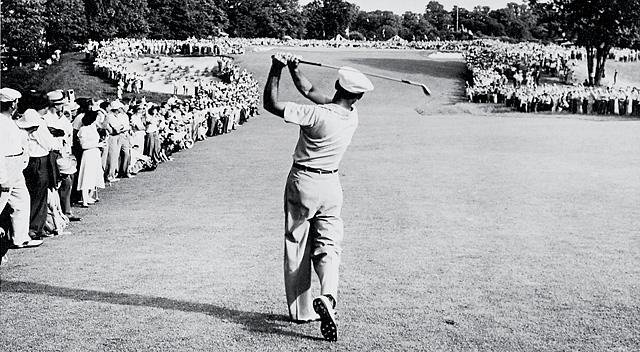 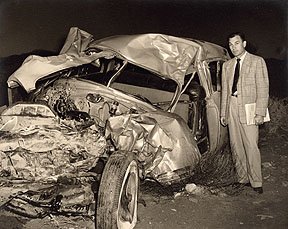 Hogan and his wife, Valerie, survived a head-on collision with a Greyhound bus on a fog-shrouded bridge, early in the morning, east of Van Horn, Texas on February 2, 1949. Hogan threw himself across Valerie in order to protect her, and would have been killed had he not done so, as the steering column punctured the driver's seat.

This accident left Hogan, age 36, with a double-fracture of the pelvis, a fractured collar bone, a left ankle fracture, a chipped rib, and near-fatal blood clots: he would still suffer lifelong circulation problems and other physical limitations even after his recovery but his recovery was little short of miraculous.

His doctors said he might never walk again, let alone play golf competitively. While in hospital, Hogan's life was endangered by a blood clot problem, leading doctors to tie off the vena cava.  The venae cavae (from the Latin for "hollow veins", singular "vena cava") are two large veins (venous trunks) that return deoxygenated blood from the body into the heart. 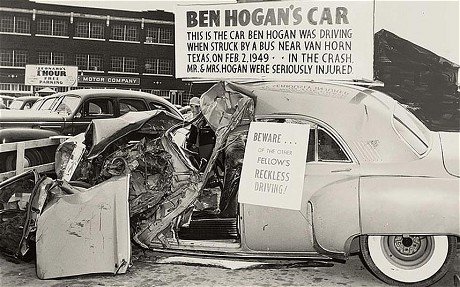 Hogan left the hospital on April 1, 59 days after the accident.

But Hogan was determined all the gloomy prognostications of his doctors were not going to come true.  And Hogan in a quite extraordinary demonstration of mind over matter willed himself better.  This was proof if proof were needed that it is the state of mind that determines whether we recover from illness or not and whether we become ill or not.  Did-ease is named fittingly – the mind in turmoil can produce illness, but a mind that is at peace with itself and determined to be better can will the body to heal itself.

Hogan used visualisation methods to imagine his body well again.  He pictured himself playing golf, in effect showing his sub-conscious and autonomic system what he wanted it to do.  He wanted it to heal itself so that he could do play golf again.  And he left the body to do its work, and follow his orders and it did. 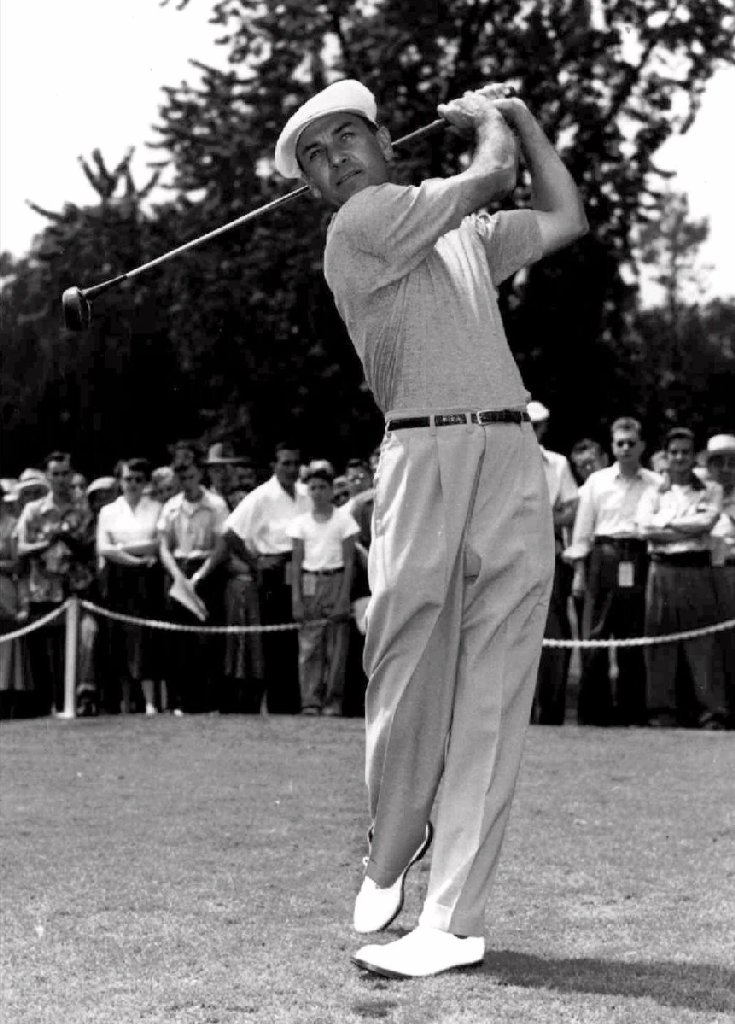 Hogan resumed golf activities in November 1949. He returned to the PGA Tour to start the 1950 season, at the Los Angeles Open, where he tied with Sam Snead over 72 holes, but lost the 18-hole playoff.

The win at Carnoustie was only a part of Hogan's watershed 1953 season, a year in which he won five of the six tournaments he entered, including three major championships (a feat known as the Triple Crown of Golf).

It still stands among the greatest single seasons in the history of professional golf. Hogan, 40, was unable to enter—and possibly win—the 1953 PGA Championship (to complete the Grand Slam) because its play (July 1–7) overlapped the play of the British Open at Carnoustie (July 6–10), which he won. It was the only time that a golfer had won three major professional championships in a year until Tiger Woods won the final three majors in 2000 (and the first in 2001).

Hogan often declined to play in the PGA Championship, skipping it more and more often as his career wore on. There were two reasons for this. First, the PGA Championship was, until 1958, a match play event, and Hogan's particular skill was "shooting a number"—meticulously planning and executing a strategy to achieve a score for a round on a particular course (even to the point of leaving out the 7-iron in the U.S. Open at Merion, saying "there are no 7-iron shots at Merion"). Second, the PGA required several days of 36 holes per day competition, and after his 1949 auto accident, Hogan struggled to manage more than 18 holes a day. 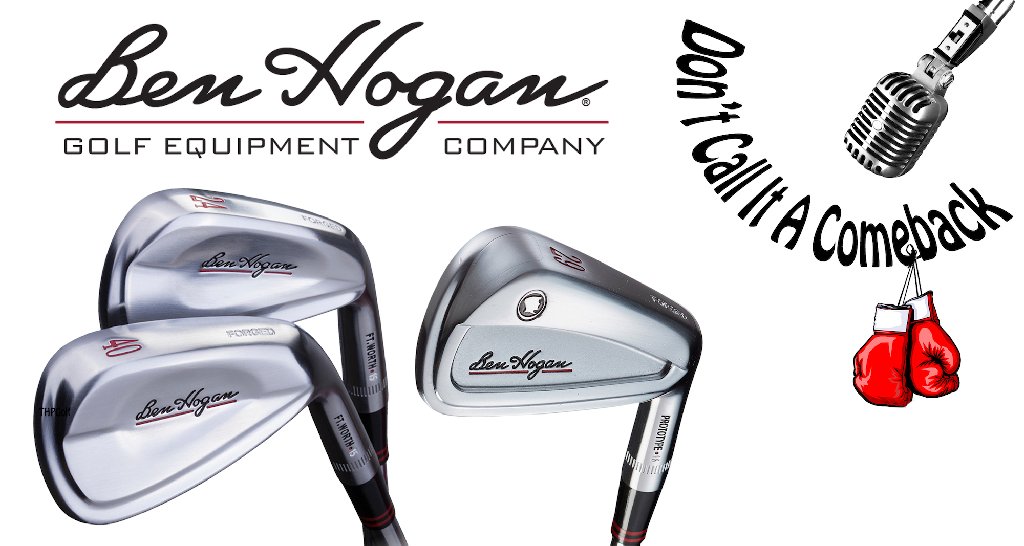 Wikipedia has quite a good biography of Hogan and you can read more if you wish by following this LINK.

Prior to the 1949 accident, Hogan never truly captured the hearts of his galleries, despite being one of the best golfers of his time. Perhaps this was due to his perceived cold and aloof on-course persona. But when Hogan shocked and amazed the golf world by returning to tournament golf only 11 months after his accident, and took second place in the 1950 Los Angeles Open after a playoff loss to Sam Snead, he was cheered on by ecstatic fans. "His legs simply were not strong enough to carry his heart any longer", famed sportswriter Grantland Rice said of Hogan's near-miss. However, he proved to his critics (and to himself, especially) that he could still win by completing his famous comeback five months later, defeating Lloyd Mangrum and George Fazio in an 18-hole playoff at Merion Golf Club to win his second U.S. Open Championship. 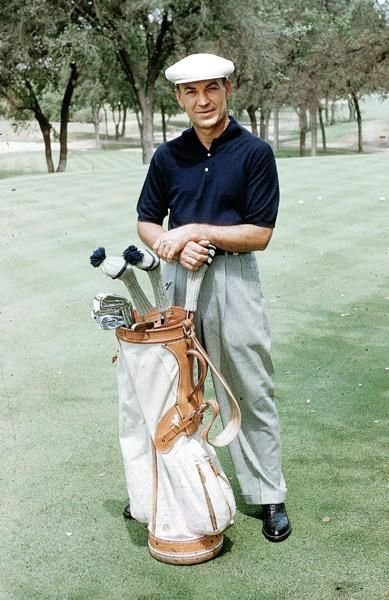 Hogan went on to achieve what is perhaps the greatest sporting accomplishment in history, limping to 12 more PGA Tour wins (including six majors) before retiring.

In 1951, Hogan entered just five events, but won three of them - the Masters, the U.S. Open, and the World Championship of Golf, and finished second and fourth in his other two starts. He would finish fourth on that season's money list, barely $6,000 behind the season's official money list leader Lloyd Mangrum, who played over 20 events. That year also saw the release of a biopic starring Glenn Ford as Hogan, called Follow the Sun: The Ben Hogan Story. He even received a ticker-tape parade in New York City upon his return from winning the 1953 British Open Championship, the only time he played the event. With his British Open Championship victory, Hogan became just the second player, after Gene Sarazen, to win all four of the modern major championships—the Masters, U.S. Open, British Open, and PGA Championship.

Hogan remains the only golfer in history to win the Masters, U.S. Open, and British Open in the same calendar year (1953). His 14-under par at the 1953 Masters set a record that stood for 12 years, and he remains one of just 10 golfers (Jack Nicklaus, Raymond Floyd, Ben Crenshaw, Tiger Woods, David Duval, Phil Mickelson, Charl Schwartzel, Jordan Spieth and Justin Rose) to have recorded such a low score in the tournament. In 1967, at age 54, Hogan shot a record 30 on the back nine at the Masters; the record stood until 1992.

In 1945, Hogan set a PGA Tour record for a 72-hole event at the Portland Open Invitational by shooting 27-under-par. The record stood until 1998, when it was broken by John Huston (it has since been surpassed by nine others, including most recently Phil Mickelson's 28-under in the 2013 Waste Management Phoenix Open).

Hogan died in Fort Worth, Texas on July 25, 1997 at the age of 84, and is interred at Greenwood Memorial Park there.