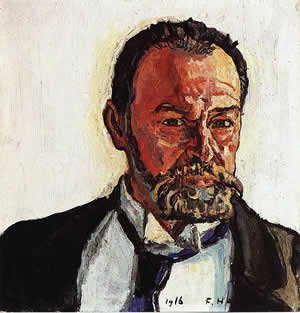 Hodler was the eldest of six children. By the time Hodler was eight years old, he had lost his father and two younger brothers to tuberculosis. His mother remarried to a decorative painter, but in 1867 she too died of tuberculosis. Eventually the disease killed all of Hodler's remaining siblings, “instilling in the artist a powerful consciousness of mortality”. Or to put it another way engendering grief on a massive scale.

Before he was ten, Hodler received training in decorative painting from his stepfather, and was subsequently sent to Thun to apprentice with a local painter, Ferdinand Sommer. Hodler's earliest works were conventional landscapes, which he sold in shops and to tourists. In 1871, at the age of 18, he traveled on foot to Geneva to start a career as a painter. 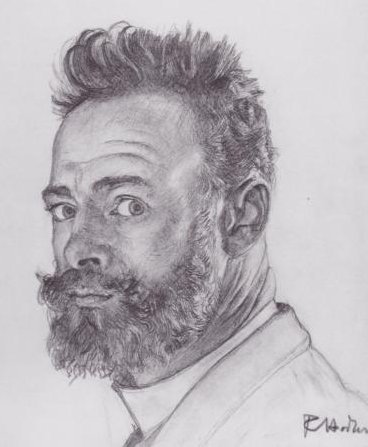 The works of Hodler's early years consisted of landscapes, figure compositions and portraits, treated with “a vigorous realism”. He was technically a superb artist, but as he matured so did his painting and his emotions started to play a far greater role in providing him with inspiration. Needless to say he was especially haunted by the theme of death. He was also an artist that used symbolism to great effect. Thus he was essentially an artist involved in the spiritual world - through dreams, through death and through symbols. He also understood the importance to spiritual experience and inspiration of ritual and ceremony and developed a style which he called Parallelism, “characterized by groupings of figures symmetrically arranged in poses suggesting ritual or dance”.

Hodler's work in his final phase became gradually more and more abstract. He used strong colours and geometrical figures. Landscapes were pared down to essentials, sometimes consisting of a jagged wedge of land between water and sky. The most striking of Hodler's paintings portray scenes in which characters are engaged in everyday activities, such as The Woodcutter (Der Holzfäller, Musée d'Orsay, Paris). This picture went on to appear on the back of the 50 Swiss Franc bank note issued by the Swiss National Bank.

Was there any other mechanism behind Hodler's inspiration besides grief, belief in the spiritual world, enacting ritual and ceremony and dreaming? 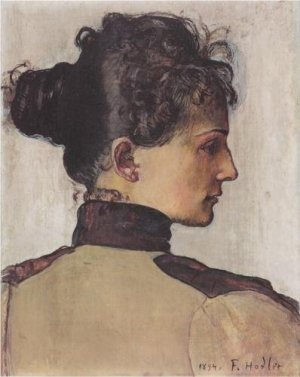 Portrait of Berthe Jacques - his wife.

He was an artist – it was making love again. In 1884, Hodler met Augustine Dupin (1852–1909), who became his companion and model for the next several years. Their son, Hector Hodler, was born in 1887, and founded the World Esperanto Association in 1908. From 1889 until their divorce in 1891, Hodler was married to Bertha Stucki, who he depicted in the painting Poetry (1897, Museum für Gestaltung, Zürich).

In 1908, he met Valentine Godé-Darel, who became his mistress. She was diagnosed with cancer in 1913, and the many hours Hodler spent by her bedside resulted in a remarkable series of paintings documenting her disintegration. Her death in January 1915 affected Hodler greatly. He occupied himself with work; a series of about 20 introspective self-portraits date from 1916. By late 1917 his declining health led him to thoughts of suicide. 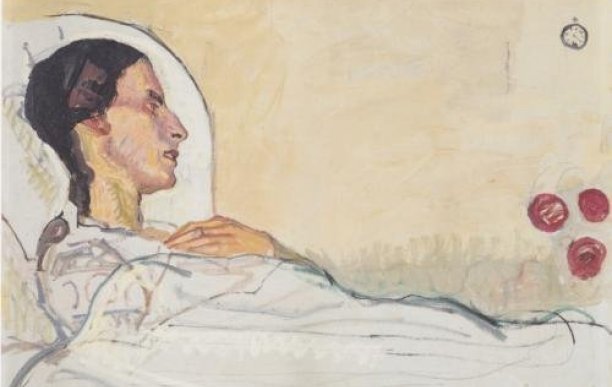 He died on May 19, 1918 in Geneva leaving behind a number of unfinished works portraying the city.

In 1914 he condemned the German atrocities conducted using artillery at Rheims. In retaliation for this, German art museums excluded Hodler's work.

A more extensive collection which can be viewed chronologically can be found on Wikipaintings.  See LINK.  This has the advantage that you can also see his evolving style and map the paintings and their subject matter to the events in his life.