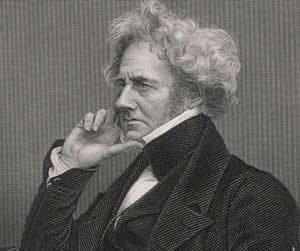 Sir John Frederick William Herschel, 1st Baronet, KH, FRS (7 March 1792 – 11 May 1871) was an English mathematician, astronomer, chemist, and experimental photographer/inventor, who also did valuable botanical work. He was the son of the astronomer Sir William Herschel.

Herschel studied at Eton College and St John's College, Cambridge and graduated in 1813. It was during his time as an undergraduate that he became friends with Charles Babbage and it was Charles Babbage who published the letter I have used as an observation. He took up astronomy in 1816, building a reflecting telescope and went on to catalogue numerous stars and moons, continuing the work of his father. He proposed the names for the seven then-known satellites of Saturn: Mimas, Enceladus, Tethys, Dione, Rhea, Titan, and Iapetus. A few years later, in 1852, he proposed the names still used today for the four then-known satellites of Uranus: Ariel, Umbriel, Titania, and Oberon. Herschel also proposed the use of the Julian day system in astronomy.

He made many contributions to the science of photography, and investigated colour blindness and the chemical power of ultraviolet rays. He also invented a practical contact lens design in 1823.

"The question, Cui bono? to what practical end and advantage do your researches tend? — is one which the speculative philosopher, who loves knowledge for its own sake, and enjoys, as a rational being should enjoy, the mere contemplation of harmonious and mutually dependent truths, can seldom hear without a sense of humiliation.

He feels that there is a lofty and disinterested pleasure in his speculations, which ought to exempt them from such questioning.

But, if he can bring himself to descend from this high but fair ground, and justify himself, his pursuits, and his pleasures in the eyes of those around him, he has only to point to the history of all science, where speculations, apparently the most unprofitable, have almost invariably been those from which the greatest practicable applications have emanated.''

A preliminary discourse on the study of natural philosophy

Herschel like Babbage and Darwin believed in the concept of systems of the universe. His ideas were set out in A preliminary discourse on the study of natural philosophy which was published early in 1831 as part of Dionysius Lardner's Cabinet cyclopædia.

He described nature as being governed by laws which were difficult to discern or to state mathematically, but which could be deduced through inductive reasoning.. He called the process natural philosophy. Like Kepler and numerous other geniuses, he set out methods of scientific investigation which emphasised that there had to be a balance between observation and theorising [bottom up and top down systems analysis]. At the time, this discourse became an authoritative statement with wide influence on science, particularly at the University of Cambridge where it inspired the student Charles Darwin with "a burning zeal" to contribute to this work.

the eyes of the perfect observer must always be open so as not to let any phenomenon pass in opposition to the prevailing theories; for any such phenomenon marks the beginning of a new theory. 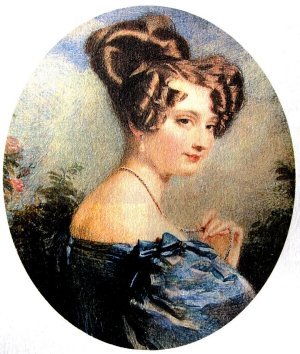 The background to the observation I have used, is that Herschel and his wife [and 12 children] went to South Africa in order to catalogue the stars, nebulae, and other objects of the southern skies. As their home during their stay in the Cape, they selected 'Feldhausen', an old estate on the south-east side of Table Mountain. So we have possibly one of the most beautiful locations you can imagine as a base, in magnificent scenery and natural vegetation. He set up a private 21 ft telescope at Feldhausen at Wynberg. And there he was able to witness the return of Comet Halley. Herschel collaborated with Thomas Maclear, the Astronomer Royal at the Cape of Good Hope, and the two families became close friends.

This voyage to a far corner of the British empire gave Herschel an escape from the pressures under which he found himself in London, where he was one of the most sought-after of all British men of science. While in southern Africa, he engaged in a broad variety of scientific pursuits free from a sense of strong obligations to a larger scientific community. It was, he later recalled, probably the happiest time in his life.

In an extraordinary departure from astronomy, he combined his talents with those of his wife, Margaret, and between 1834 and 1838 they produced 131 botanical illustrations of fine quality, showing the Cape flora. Herschel used a camera lucida to obtain accurate outlines of the specimens and left the details to his wife. Even though their portfolio had been intended as a personal record,  their accurate rendition makes them more valuable than contemporary collections. Some 112 of the 132 known flower studies were collected and published asThree studies from"Flora Herscheliana" in 1996. 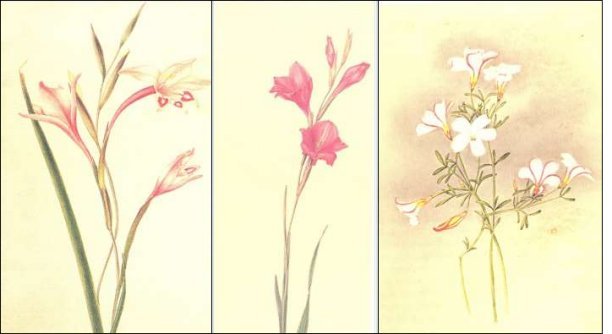 Thus in South Africa, surrounded by beauty, friends and family, he was able to simply let inspiration and wisdom seep through.  He had numerous ideas - he pondered on "that mystery of mysteries, the replacement of extinct species by others" and as you will see he also discovered plate tectonics.

He that on such quest would go must know not fear or failing
To coward soul or faithless heart the search were unavailing.