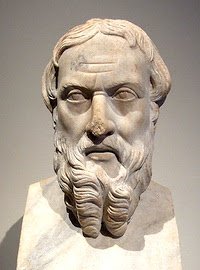 Herodotus (Ancient Greek: Ἡρόδοτος Hēródotos) was, according to Wikipedia,  a Greek historian who was born in Halicarnassus, Caria (modern-day Bodrum, Turkey) and lived in the fifth century BC (c. 484–425 BC).

Widely referred to as "The Father of History" (first conferred by Cicero), he was the first historian known to collect his materials systematically and critically, and then to arrange them into a historiographic narrative. The Histories—his masterpiece and the only work he is known to have produced—is a record of his "inquiry" (or ἱστορία historía, a word that passed into Latin and acquired its modern meaning of "history"), being an investigation of the origins of the Greco-Persian Wars and including a wealth of geographical and ethnographical information.

But there is one vital piece of information missing from this description of Herodotus and that is that he was an Adept - a successful initiate from the Mysteries.

Although the Greek used methods based on music, song, drums and so on, the key techniques within the Mysteries are all based on sexual stimulation.  All of them.  All the Greek mystery religions – not just the ones I have described - were based on the use of sexual energy as the means of promoting spiritual experience.

Every historic relic, piece of pottery, statue or sculpture bears witness to this fact, there are caduceus’s with the spine, the twisting snakes and the pineal gland and oblique references everywhere to sex and the penis and the vagina.

What we owe to Herodotus is a record of this fact, veiled, obscure where it needed to be, clear when the rules of secrecy do not apply, he records what he knows.  Herodotus in his ‘History’ attributes most sexual practises found in other cultures to Egypt.  In other words, the Greeks learnt from the Egyptians.  One of the ways he does this is to incorporate myths into the narrative:

Wikipedia
Although Herodotus considered his "inquiries" a serious pursuit of knowledge, he was not above relating entertaining tales derived from the collective body of myth, .....While the gods never make personal appearances in his account of human events, Herodotus states emphatically that "many things prove to me that the gods take part in the affairs of man" (IX, 100).
In Book One, passages 23 and 24, Herodotus relates the story of Arion, the renowned harp player, "second to no man living at that time," who was saved by a dolphin. Herodotus prefaces the story by noting that "a very wonderful thing is said to have happened," and alleges its veracity by adding that the "Corinthians and the Lesbians agree in their account of the matter."
Herodotus included stories with a fairy tale quality in part because such stories share repetitive patterns that point toward commonly accepted truths ..... Herodotus draws out the themes of sex and power that, it so happens, are also the main themes of the History as a whole.
In the 42nd passage of Book IV Herodotus states, "For my part I am astonished that men should ever have divided Libya, Asia, and Europe as they have, for they are exceedingly unequal." And later in the 45th passage he adds, "I cannot conceive why three names, and women's names especially, should ever have been given to a tract which is in reality one." ......Herodotus depicts a Fall from a state of harmony: what was once a unified tract (accord) is now divided unequally (discord) and fought over by men because of lust for land.

Thus Herodotus is describing the two competing strategies in the creation.  On the one hand there is love, direct spiritual experience and unity or aggregation - based on all the activities of suppression; on the other there is hate, lust, power, hurt and division - based on many [but not all] of the activities of overload.  Accord versus discord; harmony versus discord.

Candidates and initiates in the Mystery religions were taught suppression techniques exclusively, theirs was a 'religion' if you can call it that, based on love.  For this reason there is of course, no repression - an overload activity - which is why there is so much discussion of sex.

In History, Herodotus refers to two ithyphallic statues at Samothrace and his  observation is confirmed by the Christian author Hippolytus in his Refutation of All Heresies, 5.8.10, in which he claims that at Samothrace there stand two statues of  naked men with hands stretched upward and phalli erect.

But Herodotus does not deny alternative links and in one of the observations I have provided, he refers to the ‘Pelasgians’.   The name Pelasgians was used by some ancient Greek writers to refer to populations that were either the ancestors of the Greeks or who preceded the Greeks in Greece.

The ancient Ukrainian word "pelasg" means "stork". The Pelasgians were the people who decided to follow the storks while migrating to Southern lands from circum-Carpathian region (Western Ukraine). In the Middle East they established a state "Pelasgina" (now Palestina, or Palestine) with its capital "Ye Rusal' Lem" (now Jerusalem). The phrase "ye rusal' lem" is in a language that my grandparents used for everyday (home) speech. 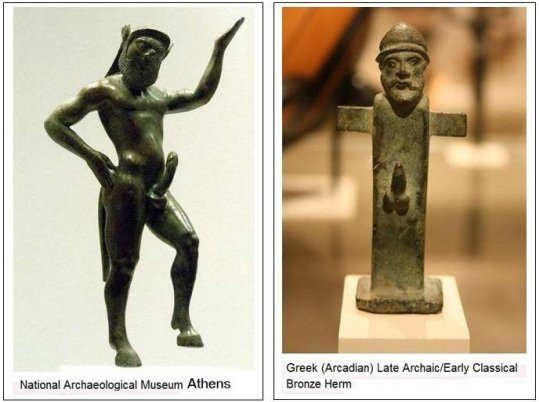 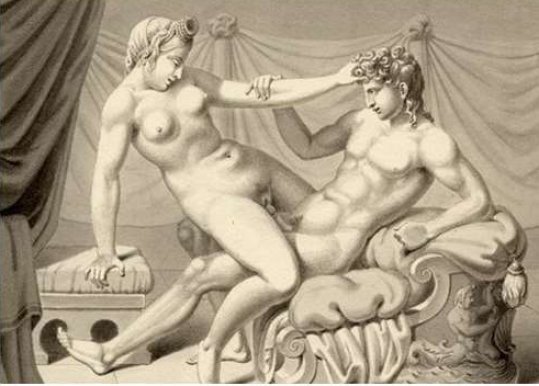