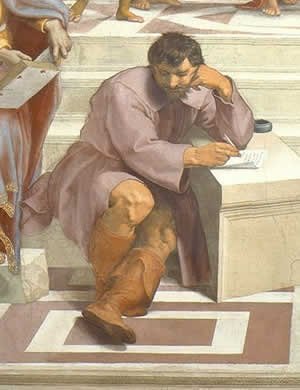 Heraclitus of Ephesus (c. 535 – c. 475 BCE) was, according to Wikipedia, a pre-Socratic Greek philosopher, a native of the Greek city Ephesus, Ionia, on the coast of Asia Minor.

But Heraclites was a great deal more than this, as he was an Adept - a successful initiate from the Mysteries, which makes him a mystic not a philosopher.

He was of distinguished parentage. Little is known about his early life and education, but he regarded himself as self-taught and 'a pioneer of wisdom'.

According to Diogenes [who isn't entirely reliable as a source] Heraclitus' work was "a continuous treatise On Nature, but was divided into three discourses, one on the universe, another on politics, and a third on theology”. For some time his philosophy was available via a book that he donated to the great temple of Artemis, the Artemisium, one of the largest temples of the 6th century BCE and one of the Seven Wonders of the Ancient World. Ancient temples were regularly used for storing treasures, and were open to specific private individuals; many subsequent philosophers in this period refer to the work. "Down to the time of Plutarch and Clement, if not later, the little book of Heraclitus was available in its original form to any reader who chose to seek it out." Diogenes says:"the book acquired such fame that it produced partisans of his philosophy who were called Heracliteans." 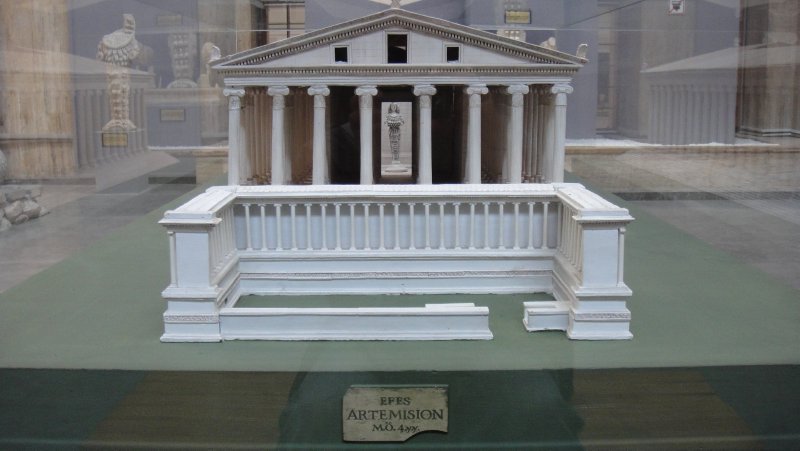 Unfortunately for us, this book was lost and all we have are fragments recorded by other authors. Furthermore, Heraclitus liked to use symbolism and obscure 'riddles' in his explanations in the hope that people might rise to the challenge of a riddle rather than taking things at face value [they didn't].

Diogenes Laërtius complained that Heraclitus wrote his book "rather unclearly" (asaphesteron) so that only the "capable" should attempt it. By the time of Cicero he had become "the dark" because he had spoken nimis obscurē, "too obscurely". 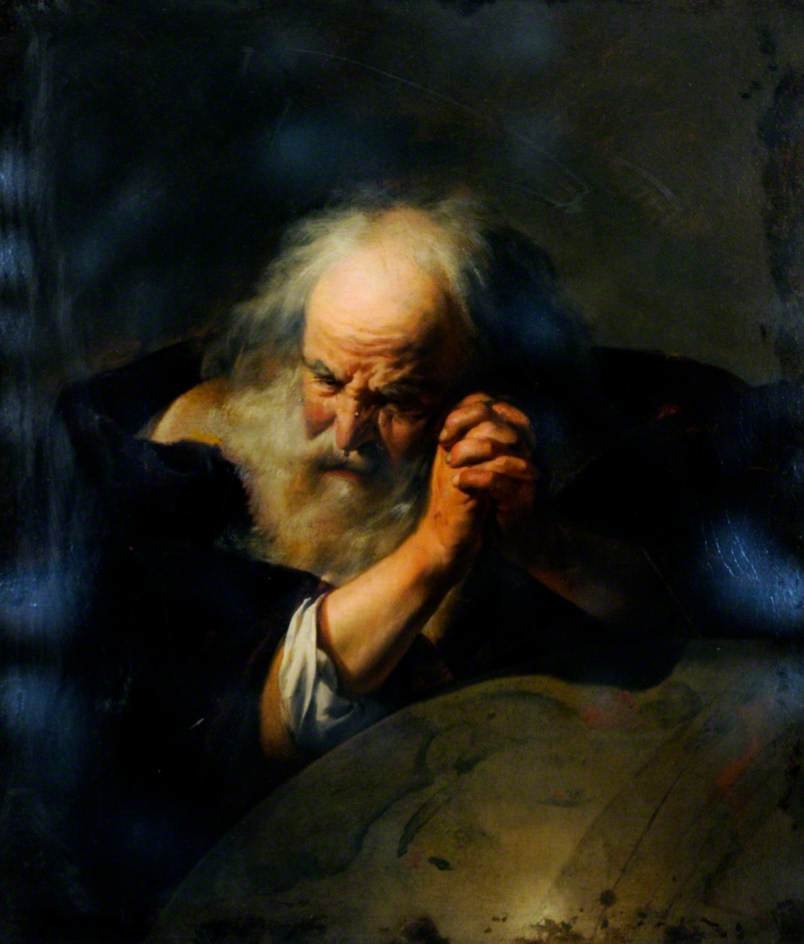 Overwhelmed by the sheer magnitude of the task
maybe, but not really weeping

His philosophy had many parallels with Nietzsche's and as a consequence his popularity was not dissimilar!

He basically believed no one and questioned everything and everybody, including, it seems, himself.

From the lonely life he led, and still more the nature of his philosophy, he was nicknamed the "Weeping Philosopher".  But this is quite unfair.  I feel a bit like that at times, trying to explain something as complex as the symbolism, activities and concepts is no easy task and I have the web to help me, it leaves you quite despondent at times.  I have sympathy for him.  I know exactly how he felt!

His overall reasons for the need to constantly question were poorly understood by his biographers who simply related that he attacked revered people like Hesiod, Pythagoras, Homer and Archilochus. Timon is said to have called him a "mob-reviler" principally because he grew increasingly frustrated with the unquestioning acceptance displayed by his fellow Athenians and Ephesians.  Plus ca change.

Suppression of memory is key to spiritual experience and ultimate wisdom. Fill your head with book learning and you have is 'knowledge, but open yourself to the spiritual world and you gain wisdom.  By only using books you have denied yourself direct experience. Wisdom is "to know the thought by which all things are steered through all things". 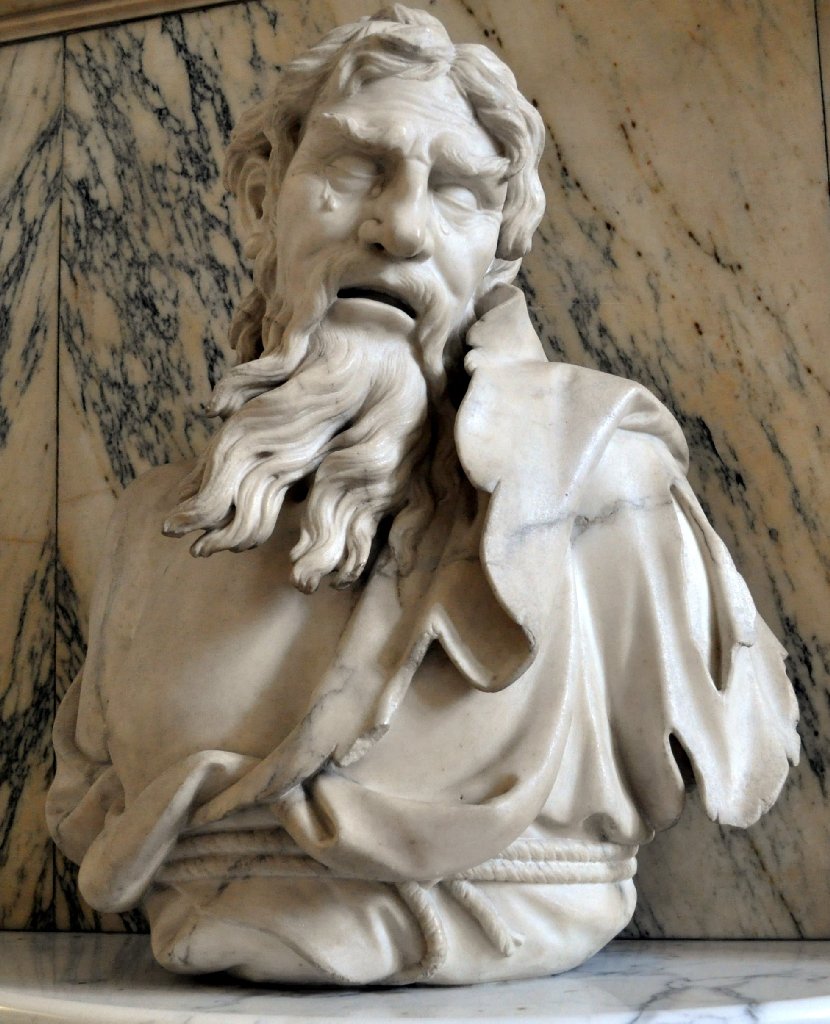 There are tantalising references to the Word in the fragments that have survived "The idea that all things come to pass in accordance with this Logos and the Logos is common". The meaning of Logos also is subject to interpretation: "word", "plan", "formula", "measure", "proportion", all of which would be true of course. All software, all spirit.

Heraclitus is also famous for his insistence on ever-present change in the universe, as stated in the famous saying, "No man ever steps in the same river twice" and "We both step and do not step in the same rivers. We are and are not", which has a very different meaning spiritually. He also described 'the unity of opposites', all existing entities being characterized by pairs of contrary properties – he made himself rather unpopular by questioning the existence of the supposed absolutes of 'good and evil'. "To the gods all things are fair and good and just, but people hold some things wrong and some right."

He also described the spiritual path "the upward-downward path." The path is a series of transformations: "turnings of fire," first into sea, then half of sea to earth and half to rarefied air.  Ascension.

The transformation is a replacement of one element by another: "The death of fire is the birth of air, and the death of air is the birth of water" - so he knew his levels and layers, which alone must earn him the classification of mystic, if he was indeed pursuing the path. 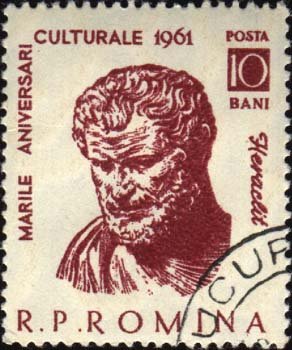 Heraclitus portrayed on a stamp

Heraclitus considered fire as the most fundamental element. Here I think he is combining fire and aether. He believed fire gave rise to the other elements and thus to all things. He regarded the soul as being a mixture of fire and water, with fire being the noble part of the soul, and water the ignoble part. A soul should therefore aim toward becoming more full of fire and less full of water: a "dry" soul was best. According to Heraclitus, worldly pleasures made the soul "moist", and he considered mastering one's worldly desires to be a noble pursuit which purified the soul's fire.

I'm not surprised that he was not generally understood or found 'obscure' because he also tried to explain the concept of form being constantly created via activity. Even Hindu mystics have difficulty explaining that one. In effect, execution of the functions continuously creates form:

“objects are new from moment to moment so that one can never touch the same object twice, then each object must dissolve and be generated continually momentarily and an object is a harmony between a building up and a tearing down”.
Whereas later philosophers tried to use the concept of the loom, Heraclitus used a bow metaphor and compared the result to a strung bow held in shape by an equilibrium of the string tension and spring action of the bow: He also used the symbolism of the lyre.

Diogenes Laërtius ascribes to Theophrastus the theory that Heraclitus did not complete some of his works because of melancholia. Now melancholia might be interpreted these days as depression or even manic depression, which if true would make him a very interesting man indeed – a manic depressive mystic! I suspect he was more frustrated than depressed, trying to get people to understand what he knew. 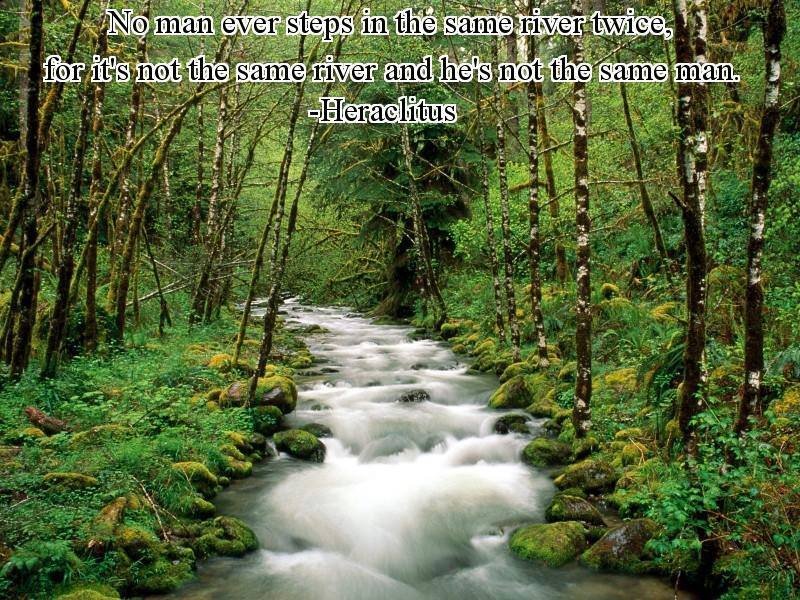 In the end Diogenes said that : "Finally, he .... wandered the mountains ... making his diet of grass and herbs."

His health did not appear to benefit from this sojourn and he developed dropsy [oedema] – the sign of a very poorly heart. The physicians he consulted were unable to prescribe a cure. He treated himself with a liniment of cow manure and baking in the sun, believing that this method would remove the fluid. After a day of treatment he died.

Heraclitus did not live in vain. Stoicism was a philosophical school which flourished between the 3rd century BCE and about the 3rd century CE. It began among the Greeks and became the major philosophy of the Roman Empire before declining with the rise of Christianity in the 3rd century.

Throughout their long tenure the Stoics believed that the major tenets of their philosophy derived from the thought of Heraclitus and "the importance of Heraclitus to later Stoics is evident most plainly in Marcus Aurelius."

Heraclitus's ideas also influenced Jewish philosophers such as Philo of Alexandria. Philo uses the term Logos throughout his treatises on Hebrew Scripture in a manner clearly influenced by the Stoics and Heraclitus.

There is always someone there to take the baton.