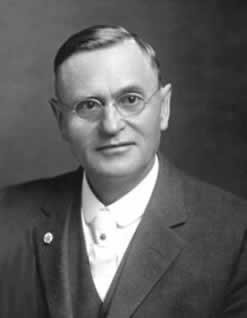 Max Heindel was born in Aarhus, Denmark on July 23, 1865 and died on January 6th 1919.  He was an ‘occultist, and astrologer’.  Born Carl Louis Von Grasshoff, he later adopted the pen name of Max Heindel.

For much of his early life, he lived a relatively ordinary existence.  At the age of sixteen, he left home to the ship-yards at Glasgow,  Scotland in order to learn engineering. He was chosen as Chief Engineer of a trading steamer, a position which took him in trips all over the world. For a number of years he was Chief Engineer on one of the large passenger steamers of the Cunard Line plying between America and Europe. From 1895 to 1901, he was a consulting engineer in New York City and during this time he married.

But things started to go wrong at this point.  His New York job was not a success and in 1903 he had to move to California to look for a new job.  In 1905 his wife died. He started to think anew and after attending lectures by the theosophist C.W. Leadbeater, he joined the Theosophical Society of Los Angeles. He also became a vegetarian and began the study of astrology.

But then overwork and privation brought on more illness, described at this stage as ‘heart trouble’.  For months he lay at the point of death and  much of the time during this illness he had out of the body experiences.  After a course of lectures in Seattle, he was again forced to spend some time in a hospital with valvular heart trouble. Still undaunted, he once more took up his work of lecturing in the northwestern part of the United States.

Heindel returned to America in the summer of 1908, where he at once started to formulate the ‘Western Wisdom Teachings’, which he had received from the ‘Elder Brothers’, it was eventually published as a book entitled The Rosicrucian Cosmo-Conception in 1909, although it has little to do with the Rosicruceans.

From 1909 to 1919, suffering a heart condition that was by this time really severe and with an adverse financial situation, Heindel still continued to teach, write, found the The Rosicrucian Fellowship [again a misnomer] and launch the Fellowship's Spiritual Healing service.

"Their agreement was this: First, That none of them should profess any other thing, then to cure the sick, and that gratis" in Fama Fraternitatis, 1614