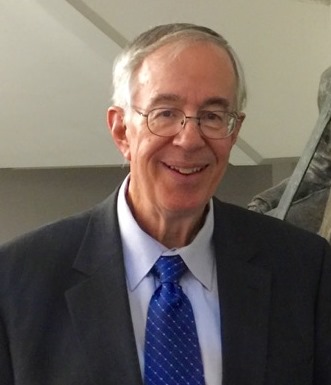 John F. Haught is a Distinguished Research Professor at Georgetown University. He specializes in systematic theology, with a particular interest in issues pertaining to science, cosmology, evolution, ecology, and religion. He has authored numerous books and articles, some of his books are listed in the references.

In 2002, Haught received the Owen Garrigan Award in Science and Religion, in 2004 the Sophia Award for Theological Excellence, and in 2008 a “Friend of Darwin Award” from the National Center for Science Education.

We had some difficulty in deciding where John's biography should go, as he is a prolific writer, a theologian, and a scientist.  In the end, the sheer number of books he has written and the dual nature of his subjects - science and theology - decided us to classify him as a writer!

In his early 20’s, John Haught started reading the works of the Jesuit priest and geologist Pierre Teilhard de Chardin. As an undergraduate student at St. Mary’s Seminary and University, Haught had majored in philosophy and completed graduate work in philosophical theology, though he was never ordained. While teaching science and religion at Georgetown University and writing books on the topic, he specialized in the areas of cosmology and biology. 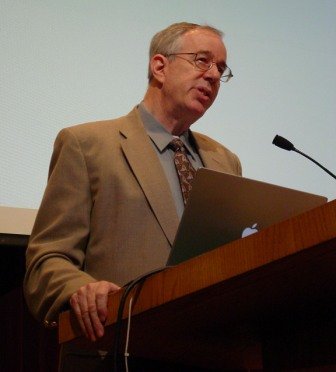 During the 1990’s, he became increasingly involved in issues relating to evolution, especially because of their growing importance in the intellectual world and the claims by creationists and prominent evolutionists alike that Darwinian science and belief in God are irreconcilable. The American cultural warfare over the teaching of Intelligent Design led Haught to write such books as God After Darwin, Deeper than Darwin, and Making Sense of Evolution. These and other works have led to numerous lectures on theology and evolution nationally and internationally.

John Haught’s lectures and works focus on a vision of reality that provides room for both scientific inquiry and a spiritual understanding.  He appears to be one of the few in America to recognise that the Bible is a symbolic text.

Wikipedia
According to Haught, a major obstacle to adopting a plurality of reading levels is the persistence of biblical literalism which erroneously looks to the Bible as a source of scientific truth. In his view, approaching ancient religious texts with modern scientific expectations is the source of unnecessary and anachronistic confusion that makes the Bible, and the biblically based faith traditions, seem incompatible with modern science.

In works, such as God and the New Atheism, Haught has shown that both the ‘religious’ and the ‘scientists’ have adopted the same misplaced biblical literalism.

Carter Phipps - A Theologian of Renewal

“On the surface, Haught might appear quite conventional, even traditional—a simple bespectacled academic with a strong interest in the relationship between science and spirit. But appearances can be deceiving. The more I learned, the more I began to understand that Haught’s mainstream credentials were in fact concealing a much more interesting subtext—a more subversive subplot, if you will… Haught is certainly a Christian, and he easily speaks the language of faith, God, and belief. But he is also emerging as a significant player in a larger spiritual project, one that transcends and includes any specific tradition… Haught calls his offering to that emerging tradition “evolutionary theology.” By whatever name, these new approaches are shaking the pillars of tradition and recontextualizing the way we understand both science and religion.”

God and the New Atheism: A Critical Response to Dawkins, Harris, and Hitchens (2008),

Christianity and Science: Toward a Theology of Nature (2007),

Purpose, Evolution and the Meaning of Life (2004),

Science and Religion: From Conflict to Conversation (1995),

The Cosmic Adventure: Science, Religion and the Quest for Purpose (1984).