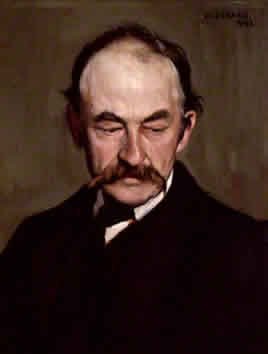 While Hardy wrote poetry throughout his life, and regarded himself primarily as a poet, his first collection was not published until 1898. Initially therefore he gained fame as the author of such novels as Far from the Madding Crowd (1874), The Mayor of Casterbridge (1886), Tess of the d'Urbervilles (1891), and Jude the Obscure (1895).

Much of Hardy's life appears to have been both dogged and influenced by the class system and moral values of Victorian society, neither of which he agreed with. As a young boy he 'demonstrated academic potential', but his family background and social position prevented him from being able to pursue a university education. His formal education ended at the age of sixteen when he became apprenticed to James Hicks, a local architect. He did well as an architect and moved to London, but here he was made even more acutely conscious of class divisions. He became extremely interested in social reform, but ultimately used his books as the mechanism to engineer change.

He was as critical of the moral values and hypocrisies of Victorian England as he was of the class system and these also came in for scrutiny in his books. Jude the Obscure, for example, was heavily criticised for its apparent attack on the institution of marriage through the presentation of such concepts as 'erotolepsy'. Erotolepsy is Hardy's word to attempt to describe a passionate sensual desire and longing which is almost insatiable, and which is violent in its expression, it has also been described as "love-seizure" and "sexual recklessness". Bathsheba was seized by it. 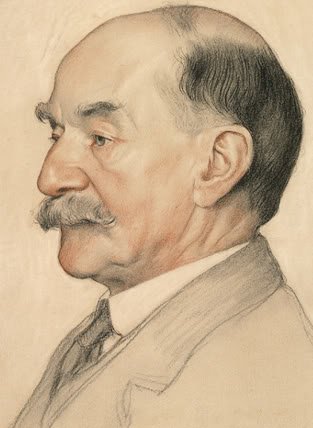 Tess of the d'Urbervilles (1891) attracted criticism for its sympathetic portrayal of a "fallen woman" and was initially refused publication.

Jude the Obscure, published in 1895, met with even stronger negative outcries from the Victorian public for its frank treatment of sex, and was often referred to as "Jude the Obscene". Some booksellers sold the novel in brown paper bags, and the Bishop of Wakefield is reputed to have burnt his copy. In his postscript of 1912, Hardy humorously referred to this incident : "After these [hostile] verdicts from the press its next misfortune was to be burnt by a bishop – probably in his despair at not being able to burn me".

Hardy was in essence against imposed and pointless social constraints, rules that hindered the lives of all involved and ultimately led to unhappiness. In Two on a Tower, Hardy sought to take a stand against these rules and wove a story of love that crosses the boundaries of class. He wanted to destroy repressive conventions.

Not surprisingly given his stance on moral values and social conventions, Hardy was not a great supporter of institutional religion either.

The Christian god – the external personality – has been replaced by the intelligence of the First Cause...the replacement of the old concept of God as all-powerful by a new concept of universal consciousness. The 'tribal god, man-shaped, fiery-faced and tyrannous' is replaced by the 'unconscious will of the Universe' which progressively grows aware of itself and 'ultimately, it is to be hoped, sympathetic'.

Commentators have variously described him as having mixed agnosticism, deism, and spiritism. But these are just names and the names used are actually just views on the same belief. He did not believe in a Father figure who 'looked after you' pointing out to anyone who asked him, that observation alone ought to show them that this was not true.

But he believed whole heartedly in the existence of the spiritual world and spiritual forces [in the plural] that controlled the universe. “Hardy showed in his writing some degree of fascination with ghosts and spirits”. This was because Hardy believed in them.

Interestingly Hardy recognised the value of enacting ritual and ceremony in helping experience and Biblical references can be found woven throughout many of his novels, but they take on their proper symbolic meaning and not a literal meaning.

The symbolism used in Hardy's work, especially his poetry, but also some of his works of fiction is extraordinary. Two on a Tower is just one example. He understood the concept of contrast and the spiritual importance of contrast. In Two on a Tower the 'two' are completely contrasting personalities - Swithin St Cleeve and Lady Viviette Constantine, - who are aristocratic and lower class, youthful and mature, single and married, fair and dark, religious and agnostic and so on. Hardy appeared to believe that true union of souls was achieved through making love as I have defined it – with intense passion – but between contrasting soul mates and not intellectual equals.

Hardy was also fascinated by the human being as a puppet. The hand of fate is an important part of many of Hardy's plots. Far From the Madding Crowd tells a tale of lives that are almost entirely directed through the hand of fate.

Had Bathsheba not sent the valentine, had Fanny not missed her wedding, for example, the story would have taken an entirely different path. Hardy's main characters often seem to be in the overwhelming and overpowering grip of fate.

One is greatly tempted to see an autobiographical element to all this, a part of Hardy's life that lays quietly dormant. His executors burnt the majority of his letters and papers and there must have been a reason. 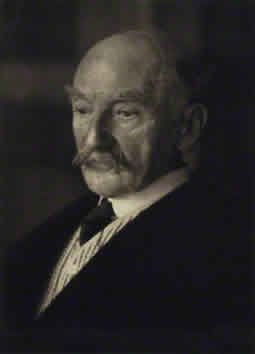 And I suppose we might conclude from this that it probably was. Hardy appears to have had a lover, or if he didn't have one, he wanted one.

Although he and Emma later became estranged, her death in 1912 had a traumatic effect on him. There is more than one type of love and he appears to have loved Emma and felt terrible remorse and guilt at what he had done. After her death, Hardy made a trip to Cornwall to revisit places linked with their courtship, and his Poems 1912–13 reflect upon her death.

In a recent biography on Hardy, Claire Tomalin argues that Hardy only became a truly great English poet after the death of Emma, beginning with the elegies he wrote in her memory. That strange combination of terrible grief and appalling remorse and regret, were the fuel that fanned the fire of inspiration. Tomalin declares his later poems among "the finest and strangest celebrations of the dead in English poetry."

Most of Hardy's poems, such as "Neutral Tones'" and "A Broken Appointment", deal with themes of disappointment in love and life. In 1914, Hardy married his secretary Florence Emily Dugdale, who was 39 years his junior. However, he remained preoccupied with Emma's death until he died.

Hardy became ill with pleurisy in December 1927 and died at  9 pm on 11 January 1928, having dictated his final poem to his wife on his deathbed; the cause of death was cited, on his death certificate, as "cardiac syncope", with "old age" given as a contributory factor.