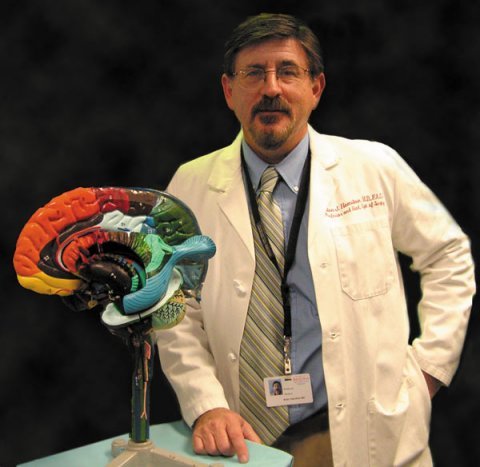 I have taken the following directly from Allan’s own biographical notes on his book The Scalpel and the Soul.

After beginning his working life as a janitor, Allan J. Hamilton, M.D FACS, went on to attend Harvard Medical School and to become the chief of neurosurgery and chairman of the Department of Surgery at the University of Arizona Health Sciences Center.

After suffering from severe back problems, which curtailed his career in active surgery, he then became a professor of neurosurgery and a clinical professor in the departments of Radiation Oncology and Psychology at AHSC. He is also the executive director of the Arizona Simulation Technology and Education Center, a medical think tank that seeks to improve surgical technique and reduce operating-room errors.

Dr Hamilton also became a script consultant for neurosurgery for the television show Grey Anatomy. He ‘lives with his family outside Tucson’.

The Scalpel and the Soul – Foreword by Andrew .Weil, M.D.

The author of this book is a storyteller and a surgeon. The stories he tells in this book are about experiences he has had through his surgical career, about memorable patients, colleagues, and mentors.

Because his specialty is neurosurgery, the patients he has operated on have often come in with devastating conditions, like traumatic brain injuries and malignant brain tumors. They and he faced critical decisions and the imminence of death, with outcomes influenced by the vagaries of chance, luck, and fate.

Allan Hamilton has the whole-person perspective needed in integrative medicine… he regards patients as not just physical bodies but also mental/emotional beings and spiritual entities. In order to understand health and illness, doctors must examine and attend to those dimensions of human life as well as the physical, even when the physical body is obviously damaged or sick.

The stories … reveal remarkable interactions between the physical and non-physical aspects of human life as observed by a skilled practitioner and scientist.

The book, incidentally, is a very good read in its entirety, even though I have extracted only a few observations from it.