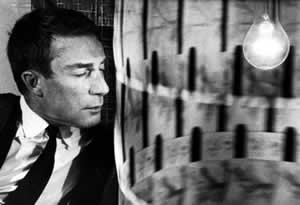 Brion Gysin (1916 –1986) was a painter, writer, ‘sound poet’ and performance artist born in Taplow, Buckinghamshire.  His mother was Canadian and his father was killed in action 8 months after he was born.  In terms of his background his education was somewhat eclectic.  He was "the only Catholic day-boy at an Anglican boarding school" in his early years and was then sent to  a prestigious college run by the Benedictines and known as "the Eton of Catholic public schools". Gysin became an atheist.

It was in painting and drawing that Gysin devoted his greatest efforts, creating calligraphic works inspired by the cursive Japanese "grass" script and Arabic script.  In 1934, he moved to Paris and joined the Surrealist Group from which he was later expelled – a humiliation he never got over. A year later, he had his first exhibition at the Galerie Quatre Chemins in Paris, at the age of 19. A gifted draughtsman, he also took the 18-month course learning the Japanese language (including calligraphy) that would greatly influence his artwork.  The Arabic influence came from his move to  Tangier, Morocco in 1950.  In 1954 in Tangier, Gysin opened a restaurant called The 1001 Nights, with his friend Mohamed Hamri, who was the cook. Gysin hired the Master Musicians of Jajouka from the village of Jajouka to perform alongside entertainment that included acrobats, a dancing boy and fire eaters.

Gysin is also well known for his invention of the ‘cut-up technique’, used by his friend the novelist William S. Burroughs to create poetry.

“William Burroughs and I first went into techniques of writing, together, back in room No. 15 of the Beat Hotel during the cold Paris spring of 1958... Burroughs was more intent on Scotch-taping his photos together into one great continuum on the wall, where scenes faded and slipped into one another, than occupied with editing the monster manuscript... Naked Lunch appeared and Burroughs disappeared. He kicked his habit with apomorphine and flew off to London to see Dr Dent, who had first turned him on to the cure. While cutting a mount for a drawing in room No. 15, I sliced through a pile of newspapers with my Stanley blade and thought of what I had said to Burroughs some six months earlier about the necessity for turning painters' techniques directly into writing. I picked up the raw words and began to piece together texts that later appeared as "First Cut-Ups" in Minutes to Go (Two Cities, Paris 1960).”

Gysin altered the cut-up technique to produce what he called permutation poems in which a single phrase was repeated several times with the words rearranged in a different order with each reiteration.  Many of these permutations were derived using a random sequence generator in an early computer program written by Ian Sommerville.

From our point of view however, one of the most interesting aspects of Brion Gysin is that, with the engineer Ian Sommerville,  he invented the Dreamachine, a flicker device designed according to Wikipedia ‘ as an art object to be viewed with the eyes closed’ but actually a machine designed to provide spiritual experience. “the flicker device uses alpha waves in the 8-16 Hz range to produce a change of consciousness in receptive viewers”.

Made an American Commander of the French Ordre des Arts et des Lettres in 1985, Gysin died of lung cancer a year later, on July 13, 1986. An obituary by Robert Palmer published in The New York Times described him as a man who "threw off the sort of ideas that ordinary artists would parlay into a lifetime career, great clumps of ideas, as casually as a locomotive throws off sparks".